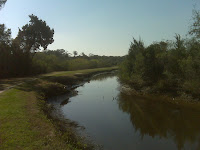 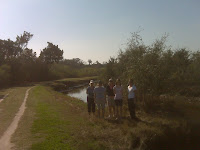 If I were a visitor to Amelia Island I would want to include in my itinerary a visit and walk on the Fernandina Beach Egans Creek Greenway!  I took a break from fishing on The Anglers Mark and joined my wife, her mother, sisters and niece for a walk on the Greenway yesterday and had a great time, seeing Cranes, Egrets, Osprey seeking their morning meal in the marshes.  The waterway's that paralleled the walk had turtles, mud-minnows and we even came across a 7' alligator sunning herself on the bank of a pond.  There's no cost to use the Greenway so plan to visit the Egans Creek Greenway when you're on Amelia Island
Posted by Anglers Mark at 10:44 AM No comments: 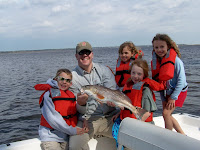 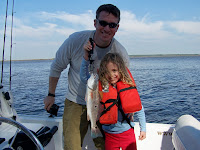 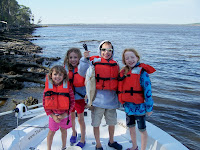 Jaime Maloney, with his kids Aidan and Maeve, along with Jay Cutler and his kids Quintin and Emmy, were visiting Amelia Island and their mother/grandmother, a resident of the island, so they scheduled to take in a backcountry fishing trip on The Anglers Mark.  They had come all the way from Massachusetts and were enjoying the great warm spell that we've had and as we launched the boat and headed up the Nassau River we saw that it was going to be a beautiful day.  To start with, anyway!  We got to Bubblegum Reef and baited some bottom rigs with shrimp and the kids soon had rods in hand, waiting for some nibbles.  It wasn't long before Emmy pulled in a nice Whiting and then Quintin had a good battle with a Stingray and shortly after Aidan hooked up with a Rock Bass.  The wind picked up some so we moved to Seymor's Point and attempted to anchor, but the current and wind were playing havoc with the effort so we made few pitches to the docks with a jig/shrimp combo then headed on up river.  Our last stop was at Broward Island where we anchored near shore and tossed out the bottom rigs.  It wasn't long before we were yelling, "FISH ON" and the Elusive Redfish were found!     Aidan and Maeve and Quintin and Emmy all had Redfish hookups and deftly brought the fish to the waiting net.  A couple of times we had "double hookups" and once we thought we had a "triple", but it actually was one Redfish and a Black Drum caught by two of the young anglers!  Emmy eventually hooked up and brought a 20" Redfish in for the dinner table.  The Dads had been super helpful throughout the whole trip, putting the kids fishing experience ahead of their own, but as we began to wind down - I actually was stowing away gear for the ride back - Jaime had a good bite and drag began to rip from his Shimano Stradic 1000, FISH ON!  He played the fish expertly, working it out from some tree limbs and we soon had a 24"  5lb+ Redfish in the boat to close out the day.  The wind was whipping up white caps by now so we headed back to the boat ramp, counting it as another great day to be out on the water!
Posted by Anglers Mark at 9:07 PM No comments:

Come visit me at the Riverside Arts Market 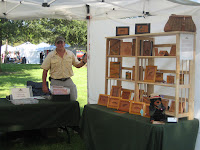 I've been accepted to show at the Riverside Arts Market on opening day, Saturday March 5th.  I'll have a few new pieces in addition to some of the stuff that I've already completed.  Please plan to stop by and say hello!  If I don't schedule any trips on Saturday's in the month of March I'll probably be at the Riverside Arts Market!  See you there!
Posted by Anglers Mark at 9:41 PM No comments:

Plan to fish the Redfish and Trout Tournament to benefit Project Change on Saturday, March 26, 2011 in Fernandina Beach, Florida and help provide a service dog to a child with autism.  Pre-registration is $75 per boat up to 4 people until March 21, 2011.  Late registration is $100 after March 21st, payable at the Captain's Meeting.  Mandatory Captain's meeting is Friday, March 25, 2011 at the Dog Star Tavern, 10 N. Second Street, on Amelia Island.  Registration begins at 5pm.  Captain's meeting begins at 6pm.  Click here for Tournament Rules.  Contact Ryan Conner 904-415-0397 or BJ Szwedzinski 904-491-0414 for more information.
Posted by Anglers Mark at 9:19 PM No comments: 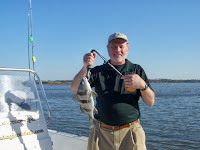 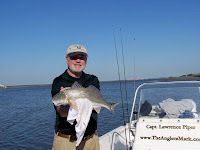 Dave McCartney was visiting Amelia Island with his wife this week and staying at the Elizabeth Pointe Lodge;  the weather has been beautiful so Dave decided to take in a backcountry, light tackle fishing trip on The Anglers Mark.  We left the City marina at 1pm with sunny skies and brisk SW wind and headed up Lanceford Creek to use the land mass as a wind block.  At our first stop we anchored just south of a dock system and Dave began to pitch his mudminnow/jig combo up to the pilings, making expert casts.  It wasn't long before he hooked up and FISH ON!  He played the fish like a pro and we soon landed a feisty 17" Redfish.  We also tried some dead shrimp on the jig, but the mudminnows seemed to be their favorite because Dave caught fish after fish.  He figured out that sometimes a little patience was needed and you could watch as Dave waited for a good solid "bump" before he set the hook, bringing in another (6) Reds with one making the Slot.  As the bite slowed, we cranked The Anglers Mark and headed further up Lanceford Creek to another dock.  It took us a while to figure out where to locate the boat to stay out of the wind and have good casting position but once we got it right Dave was on fish again, catching Redfish after Redfish.  One hookup produced a stronger pull and the fish seemed to hunker down, bending the light tackle rod, but Dave played it perfectly and we soon netted a nice 20"+ Redfish, in the slot!  We had been keeping count and were nearing 20 fish when Dave had another hookup, this time the fish kept making short runs but when we finally netted him we had a nice 14" Black Drum.  At 20 fish we called it a day and headed in, counting it as another great day to be out on the water!
Posted by Anglers Mark at 9:00 PM No comments:

The 13th Annual Nassau Sport Fishing Drum Tournament will be held March 18, 2011 thru April 22, 2011 with cash prizes being awarded based on the number of entrants.  80% of total fees collected will be paid out in prizes with 50% to the winner, 30% to second place and 20% to third place.  The Tournament will also include a Tournament within a Tournament and all participating anglers will be eligible for a drawing at the awards program.  You must be present at the NSFA Social Meeting on April 27, 2011 when prizes will be awarded.

Entry fee is $40 per angler.  The Tournament within a Tournament (T-N-T) has a $10 entry fee.  Each angler that entered in the T-N-T will be entered in a drawing to be held at the end of the tournament.  The winner of the drawing will collect 100% of monies paid in T-N-T entry fees.

All fish must be weighed in at Leaders and Sinkers Bait Shop at Egans Creek between 7:00am and 5:00pm each day. There is a (1) fish per day, per angler limit eligible for weigh in.

A Little Bit of Everything 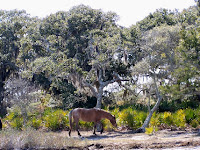 Local resident Mike Hickox treated his visiting daughter, Lacey and her boyfriend DJ to a Eco Tour/Fishing trip Friday afternoon.  It was a beautiful day to get out on the water so we met at Atlantic Seafood dock at 11:30am and eased out of the marina and no-wake zone on The Anglers Mark.   We headed out into Amelia River sound to view Fort Clinch from the water then cut across to the southern tip of Cumberland Island and broke out some binoculars to see a couple of wild horses on the grass flat.  Our next destination was Cumberland's Beach Creek and as soon as we rounded the first bend we were treated to a pod of porpoises cruising the shoreline and busting baitfish with one porpoise even coming out of the water onto the bank with it's meal grasped in it's mouth!   As we eased up the creek to the tree line we came across a small herd of horses grazing along the creek bank and we were able to inch in close for some pictures.  We checked them out for a while then cruised on up the creek to see an Osprey patrolling the sky.  As we were leaving, Lacey and DJ's young eyes spotted a newborn colt hiding behind one of the horses.  Finally we said, "let's go fishing" and headed over to Jolley River to pitch some jigs and shrimp to the exposed oyster banks.  We didn't get many bites and it was well past lunch time so we cranked the big engine and ran on up to St. Mary's for Crab Sandwiches, Fish Sandwiches and a Crab Cake salad! Boy were they good!   We found time to fit in another fishing stop behind Tiger Island and with the tide just starting back in, the fish bite had heated up.  Lacey hooked up and fought a nice 17" Redfish to the boat with DJ handling the net, then DJ got in on the action by picking up a Seatrout on his last cast.  We had a full day of touring and fishing so we headed in, calling it another great day to be out on the water! 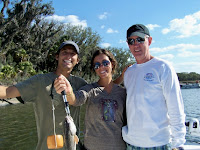 Posted by Anglers Mark at 7:19 PM No comments: 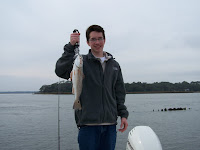 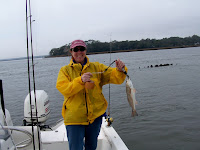 Libby Wilkes was hosting her daughter Kap and her grandson Peter who were visiting Amelia Island from Minnesota.  Kap and Peter enjoy fishing for Walleye in the lakes of Minnesota, but wanted to take in some of the backcountry fishing that we have to offer.  We left the Big Talbot/Sawpit boat ramp at 1pm today with fog hovering all over the marsh and river.    Our first stop in The Anglers Mark was up in the Horsehead area where we dropped anchor to fish the last of an outgoing tide.  Both Kap and Peter were using bottom rigs with dead shrimp (there seems to be a shortage of live ones at the Amelia Island bait shops - call for availability) and it wasn't long before Kap had a hookup and a fish fight on her hands!  She expertly worked the Redfish to the boat and a waiting net for pictures and release.  We had a short visit from an FWC officer who checked our life vests and sound device, then we were catching fish again.  Peter pulled in a fairly large Stingray then he added a few Redfish to the count.  When the tide started back in, we moved to the dock at Seymor's Pointe, anchored, and again threw out bottom rigs.  The Redfish were biting and the anglers picked up another 7-8 fish.  The fog had move on, leaving us with a pleasant day with  mild tempertures so we counted it as another great day to be out on the water!
Posted by Anglers Mark at 10:47 PM 2 comments: