I've had a few customer's ask me when the best time to visit Amelia Island. For me, the answer has to be Fall. As the weather and water begin to cool off it seems the fish bite picks up and it' much more pleasant to be out on the water. If your favorite team is playing that afternoon or the next day, that's icing on the cake! I fished yesterday, leaving the dock around 7:30am. The air was cool, but nice and there was only a slight breeze. There was a high tide (6.97') expected at 8:45am so I checked a couple of my usually spots that tend to have some tailing reds show up, but there were none to be found. I eased up to a grass flat that I've never fished and was there only a minute or two and saw a tail pop up. It wasn't within casting distance from the boat so I lowered a river anchor over the side, grabbed my flyrod and a couple of spare flies and stepped off into the grass. I inched closer to the tail and made numerous casts but the fish wouldn't eat and eventually disappeared. Luckily, there was another tail flopping around about 50 feet away so I slowly worked my way in that direction. Again, the fish wouldn't eat my fly (a shrimp pattern) so I switched to a Dupree Spoon Fly. That didn't work either. I eventually got a little too impatient and nailed the fish with a cast - whoosh - he was gone! With no more tails showing I went back to the boat. It was already full high tide, but I motored up the river a ways, finding another nice flat, and saw a huge tail about 50 yards away. After lowing the river anchor I again eased myself into the water and slowly worked my way over to the fish - a fish that was vigorously eating away on the bottom. Before I got there, another tail popped up closer to me so I changed directions and made some casts in his direction. These tails were not redfish tails; they were black and probably attached to a Sheepshead or puppy Drum. All told I probably cast at 4-5 fish on this flat. None would eat the spoon fly; I had one more fly in my pocket and they wouldn't eat it either. I remember thinking how great it felt to be out on a beautiful day stalking fish early in the morning. I eventually ran around to Jolley River and caught a few trout (all small but one), a few reds (all undersized, but fun to catch) a bonnet head shark, a ray (with no tail) and a nice black drum. They were all caught on live shrimp. The keeper trout and drum made great meal; a buddy stopped by so we fried them up with some hushpuppies and added a spinach salad!
Posted by Anglers Mark at 9:01 AM No comments:

Tailing Reds and a Sunset 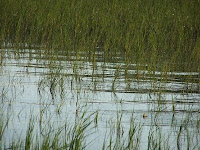 Carol and I planned to launch the boat after she got off of work on Friday. We left the ramp at 6pm and were heading up to Trolleys in St. Mary's for dinner, but we took a detour at Tiger Island to look for Manatees and possibly some tailing Redfish. We didn't see any Manatees, but Carol quickly spotted a tail, so I put the bow of the boat up into the grass. There turned out to be two HUGE tails flopping around as the Red's gorged themselves on bait in the grass. As Carol kept an eye on them, I scrambled to put a fly rod together. They must have known something was up because by the time I got up on the deck ...they sank out of sight and didn't re-appear. Can you find the tail in this picture? We eventually ran up to Trolleys and had Crab Cake sandwiches and caught a nice sunset on the way.
Posted by Anglers Mark at 3:41 PM No comments: 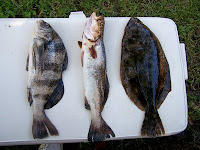 I launched at 7am this past Saturday - the parking lot was full - and ran up to Bell River. I had planned to fish some artificials and wanted to try a few spots for trout. The tide was high at 7:34am. I tried a number of different jigs with artificial baits along with some top water lures, but didn't have much luck. I ran around to Jolley River and tried some there too, but I just wasn't getting any bites. I caught some nice finger mullet with a cast net and moved to the "MOA" (mother-of-all) spots, where I picked up a nice Trout, Flounder and Black Drum, all on the outgoing tide. I had a few other bites, lost one at the boat and had one wrap around the anchor line. Turns out the Florida Lure Anglers were having a tournament - when I got back to the ramp, there was a long line but the Anglers let me in so I didn't have too much of a wait. I don't keep a whole lot of fish, but I thought I might want to cook these up, so I kept them.
Posted by Anglers Mark at 3:33 PM No comments:

Recipe of the Month: Stuffed Fish! 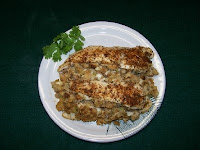 So I had a keeper Trout, Flounder and Black Drum and needed something to fix for dinner. I seasoned the fillet's with my favorite seasoning - Koriko and sprayed up a 9x12 cooking dish - and layed a the Black Drum fillets out. Then I took a box of unflavored stuffing, mixed in two cans of crab meat, a cup of chopped celery, a cup of chopped onions, some more Konriko, a few dashes of Franks hot sauce and a little more water. The stuffing mix was spread heavily over the drum filets then the remainder of the fillets were layed over the stuffing. I baked the dish for 30 minutes and served it with some home made Ramoulade sauce and ...butter beans!
Posted by Anglers Mark at 3:24 PM No comments: 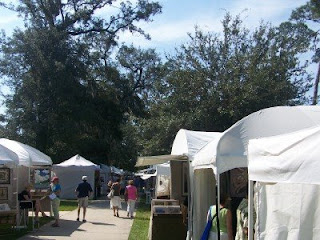 We had a great time at the Riverside Art show - the weather was perfect, there were plenty of people and the shade tree's made it very comfortable. Now that the show is over, I've returned a number of pieces to the Salty Feather, located on St. Johns Bluff Road in Jacksonville. The Salty feather is a full service fly shop that carry's fly rod's, reels, kayak's, and fly tying materials. The owner, John Botko, has agreed to show my work on consignment, which is working out good for both of us. I'll be working on some new pieces - probably a number of journals - and I also plan to work in some wood items - with a touch of leather - of course!

Posted by Anglers Mark at 6:16 PM No comments: