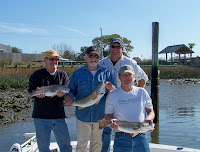 Michael Purser and his friends Tim Ralston and Andy Hall were visiting Amelia Island along with their wives  so the guys decided to take in a backcountry fishing trip on The Anglers Mark yesterday.  We met at the Atlantic Seafood dock at the Fernandina Harbor Marina at 9am with balmy 60 degree temperatures, no wind and a heavy fog.  We eased out of the marina just as the high tide peaked and headed south, chugging along through the fog and relying on the GPS to get us to our first spot, which was a oyster flat, flooded with the tide.  Although visibility was only about 75 yards, the guys could see the marsh grass and began tossing their float rigs with live shrimp up to the grass line. After about 15 or 20 minutes they guys had only had a few minor nibbles and I was beginning to wonder whether we should make a move when, BAM!  Michael's float disappeared with a vengeance!  He played the hard fighting fish perfectly and we soon netted a nice 20" Black "Puppy" Drum.  Then Tim got in on the action when his float went under and he had a BIG fight on his hands.  We could see the fish rolling out in the fog, but Tim played the fish to the boat.  But this big Red had grown through the slot for a reason and the wiley fish found his way to the transom and broke his self off on the propeller, OUCH!  Andy joined in by catching another  20" drum,  a couple of keeper sized Trout, one measuring close to 20",  then Tim and Michael both caught and landed two 26" Redfish.  As the bite slowed, we pulled anchor and slowly made our way over and up Lanceford Creek, motoring through the fog, with Dolphin jumping in the large wake, a great sight to see!  We eventually made it to some docks, anchored, and began to fish a jig and shrimp combo.  Michael picked up another Slot Red,  then both he and Andy caught a couple of "rats". Tim was going deep and landed a few more Trout.  Our last stop was behind Tiger Island and although we didn't have too many bites, Andy had one strong hookup, out deep, and after a good battle, landed another 26" Slot Red, wrapping up another great day to be out on the water!
Posted by Anglers Mark at 8:56 PM No comments: 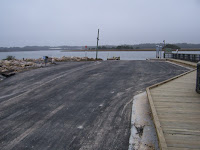 My wife and I stopped by the Sawpit Boat Ramp on Big Talbot Island yesterday to see if the repairs were completed and see that they have extended the time for the ramp to be closed until February 17th.  They've installed a new bulkhead on the north side of the drive where the washout damaging the pavement, installed new decking where the bulkhead was installed, and paved the entire area.  No work has been done on the old dock on the south side of the ramp.
Posted by Anglers Mark at 8:54 PM No comments: 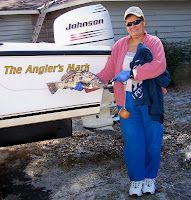 Saturday morning I fished with Leon and Sharon Freeman along with Charlie Jones, launching from the Goffinsville boat ramp just off the island.  We pulled away from the dock shortly after 8am with clear skies, temperature in the low 30's and a wind picking up.  Our first stop was Bubblegum Reef in the Horsehead area and we anchored at a drop off out from an old oyster bank.  Fishing straight down, it wasn't long before we began to get bites and soon Sharon had a strong hookup, and FISH ON!  She fought the big fish valiantly but it eventually found its way into some structure and cut itself off. OUCH!   We continued to fish and soon began to catch some nice Puppy Drum (Black Drum), catching 5-6 of them with two in the keeper range, above 14".  Leon picked up a few Sheepshead, too.  Eventually the bite slowed and the wind had picked up to about 15mph making it somewhat uncomfortable so we pulled anchor and headed to the shelter of Christopher Creek where we picked up a Slot sized Redfish.  We were pitching to the rocky shoreline hoping for a Trout to round out an Amelia Island Inshore Slam, but we didn't have a bite.  However, one angler who had been trolling the creek slowly said that he had about 6 Trout with a couple being keeper sized.  Back out in the wind  and with NFL football playoffs due to be on soon, so we headed in, counting it as another great day to be on the water!
Posted by Anglers Mark at 9:28 PM No comments: 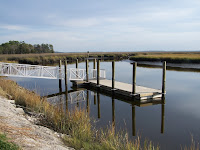 I haven't launched from the Wilson Neck boat ramp in a few years but lately I've been considering a trip to the upper areas of the Nassau River for some personal "fun" Striper fishing so I paid a visit to the Wilson Neck Boat Ramp located in the south side of Yulee.  I was pleasantly surprised to see that the County has improved the ramp and parking and have installed a nice floating dock.  There is also handicap access, paved parking, and lighting.  Using this ramp gives you access to Gardner Creek and to Nassau River near U.S. Highway 17, the RR trestle, and I-95 bridges.
This Nassau River area and the St. Mary's River, up around Crandall and White Oak, are known for their Striper fishing.  I've been getting good reports of catches of Redfish, Drum and Trout in the upper Nassau River from Lofton Creek up to the bridges. 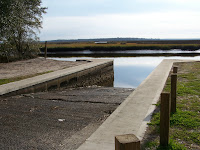 The ramp is tucked away in the Wilson Neck area of a Yulee residential area so here are some directions: Turn south on U.S. Highway 17 in Yulee and go 2.3 miles to a traffic light at Harts Road.  Turn left on Harts Road and go 1.1 miles (you will go through a couple of "S" curves).  Turn right on Wilson Neck Road and go just .2 miles to Lana S. Court.  Turn left and go a block or two to Faye Road.  Turn Right on Faye Road.  Follow Faye Road down to the boat ramp and Gardner Creek.  The ramp is just over 11 miles from Amelia Island.
Posted by Anglers Mark at 9:31 AM No comments:

If you live in the Fernandina Beach, Yulee, Jacksonville area then plan to sign up for Florida State College at Jacksonville's Amelia Island Backwater Fishing class!  This should be a fun class to learn and share some fishing techniques, rigging, knot tying and more!  I'm sure there will be some fishing stories told and at the last class we'll have a cookout.  Can't beat that!  The class will be Thursdays, beginning February 16-March 15, 6-8 p.m and will be held out at the Florida State College Betty P. Cook Nassau Center, Room T107.
Posted by Anglers Mark at 9:06 AM No comments: