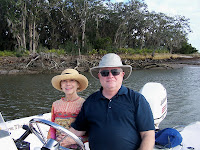 I had the pleasure of doing a eco-photo tour today with a nice couple from the Atlanta area who were visiting Amelia Island for their annual winter trip.  We toured Old Town, Fort Clinch, and the south end of Cumberland Island where one of the wild horses appeared "on que" as we cruised the sea shore.  We eased up into Beach Creek and I dropped the trolling motor to quitely motor along the driftwood strewn bank - what a peaceful day!  We also crossed over to the Tiger Island's and made our way up into Tiger Basin to wrap up another great day to be out on Amelia Island waters!
Posted by Anglers Mark at 9:59 PM No comments: 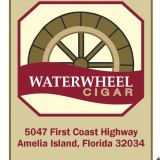 They all have something in common, especially now that the owner of Waterwheel Cigar, Conrad Centeno, is carrying my flasks in his shop!  This fine cigar store is located on the south end of Amelia Island at 5047 First Coast Highway and has an excellent selection of fine cigars, accessories and gifts.  I found the ambiance of the store to be very relaxing and the lounge area with leather chairs to be inviting.  Stop in and see Conrad the next time you're visiting Amelia Island or Fernandina Beach and let him help you select a cigar (or two!) to enjoy during your visit.  Or, just click here to visit the Waterwheel Cigar online store!

Posted by Anglers Mark at 7:52 AM No comments:

The Anglers Mark has new editions to it's equipment list, the TFO spinning rods!  For the light tackle jigging that I love to do here fishing Amelia Island, I've added the Gary Loomis Tactical Series 6'6" Medium spinning rod.  I've put my Shimano Stradic 1000's on these loaded with 10lb braid, tipped with a 14lb flourocarbon leader tied to a 1/4oz jig.  The rod is light and keeps you in touch with the bottom and any slight bump from a fish and it has the backbone to work in even oversized Redfish. For the float rigs I've got the new Gary Loomis Signature Series 7' Medium Heavy spinning rod. On this rod I have the Shimano Stradic 2500 loaded with 15lb braid, a Cajun Thunder float, then a 3' piece of 14lb flourocarbon leader and circle hook.  This rod has the strenght to make those longer casts into the wind with the float rig and gives you immediate hookup when that float goes under!  I'll also be using these whenever I want to toss topwater lures or use a Trout rig setup.  Here's a message from Gary Loomis about the rods:

Posted by Anglers Mark at 9:13 AM No comments:

Fishin in the Wind 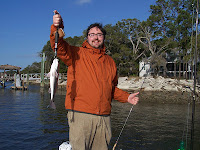 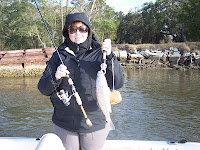 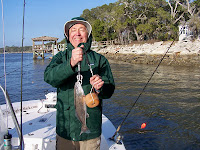 Brian and Leah Cochran were visiting Amelia Island again and met up with me down at the Sawpit Creek boat ramp at the south end.  They also had with them Brian's dad Stan.  Although the weather guys had predicted a nice day they were somewhat off on their wind calculations!  It was blowing at least 10 if not more but these anglers were prepared to brave the elements!  We headed up Nassau River and made our first stop at Spanish Drop, fished a creek runout, then moved on to Bubblegum Reef to fish the very last of an outgoing tide.  I noticed the water temperature was around 54 degrees.  Although the wind was not too bad here it was just enough to be aggravating so we moved over to Seymore's Point.  Our first stop at the docks didn't produce anything other than relief from the wind but the second stop brought some action.  Brian was the first to hook up, tossing a live shrimp on a 1/4 oz jig.  He found a hungry Redfish and brought it to the boat.  Then his dad tossed a live shrimp under a float up near the bank and it soon began to walk off and then go under. Stan lifted the rod tip firmly and had a FISH ON!  He played it perfectly and soon brought it to the net, another feisty Redfish.  Then Leah hooked up with a jig and shrimp but this time it was a fat Seatrout.  We fished this spot for a good while and had a few more fish.  Leah broke in my new TFO Gary Loomis Tactical  6'6" rod by hooking up and reeling in a nice Redfish.  Eventually we made run to Broward Island but the wind and wave action made it too aggravating to fish so we made our way back to the shelter of Christopher Creek where we picked up one more Redfish and a few more bites.  With that, we called it a day, another great one to be out fishing Amelia Island, Florida waters!
Posted by Anglers Mark at 8:34 AM No comments:

I'm happy to announce my work is now being carried by Beau Outfitters located at 3564 St. Johns Avenue which is in the historic shopping district of Avondale in Jacksonville.  Co-Owner Chase O'Steen felt like my hand crafted leather covered flasks would be a great fit with the quality apparel and accessories that he stocks.  If you're in the area, plan to stop in at Beau Outfitters in Avondale and browse the aisles!  I also have flasks at the two upscale Amelia Liquor stores on Amelia Island.  One is located on Sadler in the Publix shopping center and the other is located on the south end in the Harris Teeter shopping center.

Posted by Anglers Mark at 5:26 PM No comments: 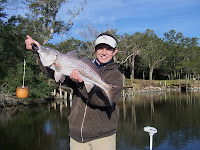 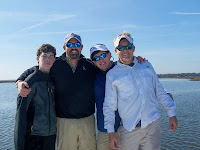 Brian Corbett and his family were visiting Amelia Island, Florida for the New Year holiday and so he scheduled a light tackle fishing trip with his two sons Conner and Kiernan and his nephew, Knox.  We meet up at the Sawpit Creek boat ramp at Big Talbot Island park yesterday morning and headed up the Nassau River in The Anglers Mark with the tide having already turned and coming in for about 3 hours.  The back country water temperature was 53 degrees when we made our first stop and began to fish live shrimp under floats and live shrimp and mud minnows on 1/4 oz jigs.  Almost immediately Kiernan hooked up and had a feisty Redfish on. The other anglers joined in and had hookup after hookup of hungry Redfish and Seatrout.  Knox landed a 9-spot Redfish and Brian hooked up with a Sheepshead to round out an Amelia Island back country slam, of sorts.  When we made a move to deeper water Conner added a keeper sized Trout to the cooler then he "called his fish", putting on a fat Cocahoe minnow and tossing it deep to the rocky shoreline.  BOOM!  FISH ON!  This Redfish wasn't a rat, for sure!  He played the fish perfectly and after a long battler with two or three drag ripping runs, he landed a nice, 28 1/4" oversized Redfish!  We snapped some pictures, measured the beast, then sent him on his way to be caught another day!  We hit Bugglegum Reef at dead high tide and had very little action then move on around to Jackstaff and up into a shallow creek.  The anglers again had some hot action, catching a good handful of Trout then a whole mess of hungry Blues.  Moving out into deeper water they got back into the trout and wrapped up the day catching fish down to the very last shrimp!  With that, we called it a day, another great one to be out on Amelia Island waters!
Posted by Anglers Mark at 2:04 PM No comments: