Finally a Big Flounder - and a good day of fishing! 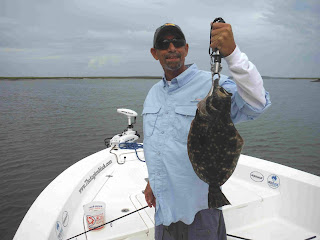 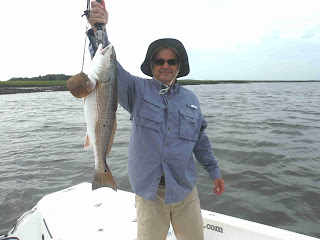 Todd Johnson and his college buddy Garrett met here at Amelia Island and took in a back country trip on the Anglers Mark this morning. We met up at the Dee Dee Bartels Park boat ramp and scooted across the river to fish Tiger Island logs on the first of an incoming tide. We worked down the island tossing 1/4oz jigs with live shrimp and only had nibbles until Garrett pitched between two stumps. As he took up his slack he felt a "heaviness" and BOOM! Big fish on!  Garrett worked it to the boat as it dug deep, but he kept the pressure on and landed a big 20" Flounder - the biggest of the year on the Anglers
Mark - which set him up in first place of the 2019 Bragging Rights Tournament - Flounder Category (scroll down the right side of this report for standings).  That was the only fish we got at Tiger! Hah!

We cruised around to the Jolley River and fished the "bank" and things sure did heat up. Todd battled a big 25.25" Slot Red to the boat, Garrett added a couple of more keeper sized Flounder, and they both had a smaller Red or two. We fished Snook Creek and picked  up a nice sized Whiting then came back up the Jolley and picked up another couple of Slot Reds and keeper sized Flounder (5 in all).

In addition to some Jacks and a rare Cigar Fish, it turned out to be an outstanding day fishing here at Amelia Island, Florida. 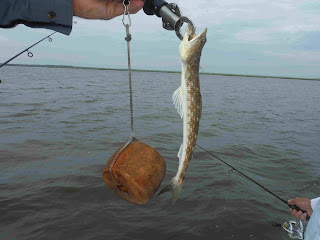