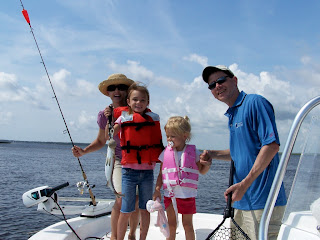 David and Kim Arnett of Douglas, Ga. were in town with their kids Abbey and Bethany and called for a fishing trip. They fish as a family at home and you could tell that they knew their way around a fishing rod! We left the southend boat ramp at Sawpit Creek at 8am, ran to the docks at Longpointe, anchored, tried a few casts and then moved on. We anchored at the mouth of Jackstaff, had no bites, but I noticed that both David and Kim were making some excellent casts and Abbey was doing a pretty good job, too. So we began to troll the marsh grass with the oysters just beginning to show on an outgoing tide. It wasn't long before Kim had a fish take her live shrimp the fight was on! I yelled "clear the way" and Kim fought the fish to the back of the boat and back to the middle and we netted a nice 6-spot 20" Redfish. We fished on up Jackstaff, moved on to "Bubblegum Reef" and dropped anchor again. We had only been there a few minutes before David spotted a bottom rig bouncing. Abbey eagerly grabbed the rod fought the fish to the boat and we netted not one, but TWO catfish: caught on one hook! The smaller cat had bit the hook while a larger one had gotten entagled in the line. As we tried to free the catfish Kim hooked up with another fish that put up a good fight, brought it to the boat and landed a fat 16" Trout. We tried one more stop at scenic Broward Island, but the sun was getting hot, and all of us were talking about the swimming pools and air conditioning that awaited us so we wrapped it up and came on in.
Posted by Anglers Mark at 8:09 PM