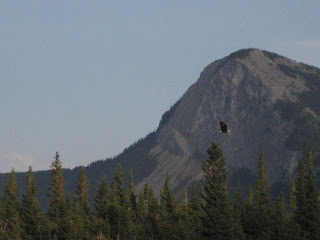 Carol and I traveled to Canada last week to have our wedding ceremony and were able to get in some fishing the day after. We had set up a trip down the Bow River with guide Richard "Rocket" Miller who picked us up at the hotel Fairmont at Banff Springs at 2pm. Rocket works with Tightline Adventures located in Banff and had all the gear -flyrods, reels, flys, waders and boots ready to go and had in tow a Clackacraft drift boat. We had a short drive to the launching site where Rocket set out lounge chairs for us to put on our waders and boots. After a brief orienatation we began our drift down the river. Rocket 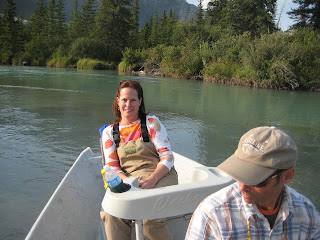 instructed us to cast our Dry fly's up near the bank and coached me on "mending" the line before the current began to make the fly move in an unatural way. We also cast some 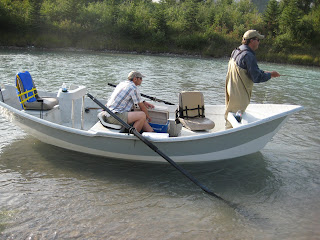 weighted tips with Clouser Minnow flys where we were instructed to make our cast as close to the bank as possible then strip the line back, cast and strip, cast and strip. I had the most trouble with the heavier sinking flys with their weight giving me casting issues. With the Dry fly's I was able to work in some good casts on occasion with an occasional pile up or line Snafu. Rocket was patient and taught us a number of flyfishing tips, along with pointing out wildlife and interesting features on the shore. We fished until dusk with a planned ending at a couple of "flats" where we expected to see the Trout rising to feed on the many bugs fluttering over the water. Although we did see some rises, they didn't seem to be consistent and wouldn't take when we tossed our fly to the rise. For the day we ended up catching a few "elusive" Brown Trout and missing a few bites but had a great time and saw some beautiful scenery; we were treated to sightings of Bald 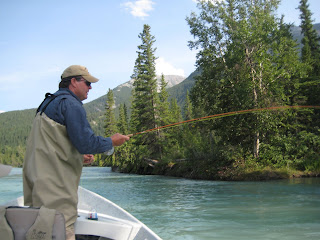 Eagle, Beaver, Loon and other shore birds and had a coyote cross our path on the way back to the hotel. Another great day of fishing!
Posted by Anglers Mark at 9:04 PM