Fishing with the manatees 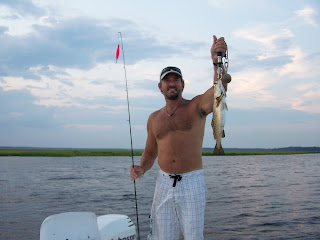 With the idea to squeeze in one more fishing trip during the weekend, Carol, myself and Hugh John McDonald launched the boat Sunday afternoon at the north end ramp with a few hours of sunlight left. As we boarded the boat, friends Don and Sue Hughes pulled up in their boat and let us know that a "herd" of manatee were at the mouth of Tiger Island. We cruised over, dropped the trolling motor and eased up into a creek and Carol immediately spotted manatee boils and snouts. We drifted out of the creek with the meandering manatee and as Carol sna 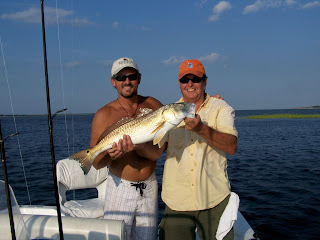 pped pictures, Hugh John and I noticed that fish were feeding on bait as the high water left the grass. We baited our hooks with live shrimp dangling under a float and began casting. The Sea Trout bite was on with trout after trout boated and released with a few Jacks, Lady Fish and "baitstealers" mixed in. I eventually hooked up with a fish that I immediately knew wasn't a feeding trout and the fight was on. My braided line and fluorocarbon leader held and the fish was reeled to the boat and to Carols waiting net - a 29" Redfish! We snapped a couple of pictures then got our bait back into the water and caught trout after trout after trout. With most of them undersized and the sun get closer to the horizon we decided to pull anchor and run to Jolley River. It wasn't but one cast after anchoring when Hugh John's float went under and Trout ON!
He expertly worked the fish in and we knew we were in to some bigger fish. His next two casts produced fish and soon Carol and I joined him, jockying for position to get our casts in. In addition to trout we picked up a few rat Reds and had non-stop bites and action until the sun went down, catching approximately 30 fish for the few hours we were out. With lightning crackling on the horizon we pulled anchor and left 'em biting, another great day on the water!
Posted by Anglers Mark at 9:58 PM