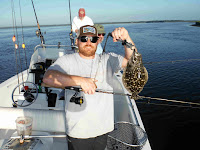 I fished yesterday with Bobby Allison and his buddies Dennis and Brandon, meeting them down at the Sawpit Creek boat ramp for an early morning trip up the Nassau River. The tide was still going out so we made a quick run and were fishing our first spot with jigs and live shrimp within just a few minutes. Brandon knocked the skunk off early with a Flounder catch then we got into some Redfish and all three anglers were putting fish in the boat. All of these fish were in the 15-17" range, fun to catch, but not of keeper size. 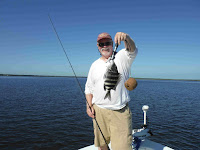 All told, thru out the day, we probably caught 25lbs of "good eat'n fish", but we never got that Slot Redfish.

We did make it down to Broward Island where Bobby landed a nice keeper sized Flounder and then he outsmarted a Sheepshead that was nibbling on his bait.  Later, Dennis followed that up with a Sheepshead catch of his own, this one of keeper size.   We also landed a few Trout, all in the 14" size range, and  more Redfish. 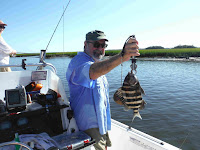 Our last stop was back at Spanish Drop and after catching another couple of Trout and Reds, we called it a day, another great one to be fishing here at Amelia Island, Florida.
Posted by Anglers Mark at 1:23 PM