Big Hookup With a Backwater Redfish 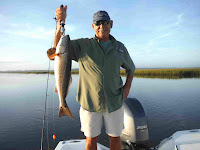 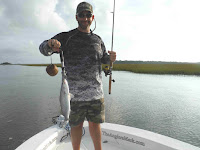 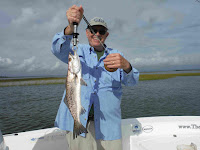 The Georgia Bulldog invasion is here!  I met Bob Blalock, his son William and his in-laws Tommy and Martha up at the Dee Dee Bartels Park boat ramp early - before the sun came up - with plans to get in some top water lure action as we hit our first spot, which happened to be up at the Jolley River on an tide that had been coming in a few hours.

Bob and William were on the bow tossing the topwaters while
Tommy and Martha fished the stern. The top waters did have a "spit" or two at them but no takers. Tommy knocked the skunk off with a Seatrout catch and shortly after that Martha hooked up and reeled one in.

We ran up the river and fished another marsh line. Now, every one was fishing a float rig with minnows. We had only been fishing just a short time when Tommy, after making an excellent cast, had a big bite, and Fish On!  We could tell right off that it was a big fish - the
drag was ripping and the fish stayed close to shore for a while. Then Tommy worked it to the boat and I was thinking, "well, not so big" but then it saw the boat and off it went. From then on it was a battle  But Tommy was up to the task and worked it patiently to the boat and finally landed a big 26.25" Slot Redfish. Boy what a fish!

Our next stop was back towards the mouth of Jolley and although we didn't have a whole lot of action, William did land our first keeper sized Seatrout.  We fished the outside of Tiger where we caught a couple of more Trout, then poked around some flats looking for tailing Reds. Our final stop was over in the Bell River where we had some bites here and there and then Bob hooked up and boated a big 19" Seatrout.  Although it was unseasonably warm for October ( I heard on the radio it was approaching record highs) it was a beautiful day and a great one to be fishing here at Amelia Island, Florida.
Posted by Anglers Mark at 4:27 PM