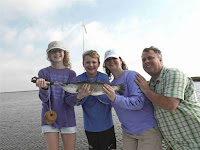 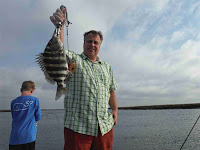 We did a double boat group this morning - myself and Capt. Brian Soucy- with each of taking four guests out to the back waters of Amelia Island. I had Duane and Kim Drape and their kids Madeline and Jackson and we made our first run down the Amelia River with plans to fish some dock pilings on an outgoing tide using the traditional "slip float" Trout rig. We arrived after a cool run and began to drift our live shrimp off the stern of the Anglers Mark. It only took a few passes before the anglers began to have hookups-
Jackson put the first one in the boat then all four were catching fish. A good handful were of keeper size. When the bite slowed we switched to jig and shrimp and began to catch fish again. Jackson had a strong hookup and this one was really bending the rod. He valiantly fought it and eventually landed a nice 21" Seatrout, a fish that puts him squarely in first place in the Anglers Mark 2017 Bragging Rights Tournament - Seatrout Category(scroll down the right side of this report to see standings).  Kim put a couple of nice fish in the boat, Duane had Trout and then a really nice Sheepshead and a Whiting and Madeline, who was baiting her own hooks and making excellent casts, persevered and put a not-so-common Weakfish in the boat. As always, the fish quit biting so we made a run up to the Jolley River and fished some exposed oysters but the west wind was making things difficult so we dropped back to Tiger Island to wrap the day up. Kim came alive with a Bluefish and Trout catch then Duane wrapped things up with a the first and only Redfish catch of the day. With that, we called it a day, another great one to be fishing here at Amelia Island, Florida.
Posted by Anglers Mark at 9:52 PM