Slowly Building a Mess of Fish 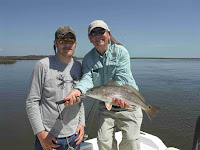 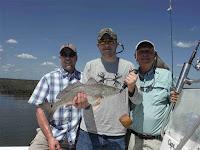 I had a three generation group of anglers today - Steve Buckley, his son-in-law Dave, and his grandson David. I met them up at the Dee Dee Bartels Park at 10:30am with plans to fish the first of an outgoing tide. We made our first run over to the outside of Tiger Island (it's been good to me this week!) and set up within casting distance of some sparse marsh grass. The three anglers were tossing float rigs and mud minnows - no live shrimp today - and they were making excellent casts to the edge. it took a while but then Steve
had his float disappear with a vengeance and, FISH ON! He played the fish patiently and soon landed a nice 20" Slot sized Redfish. We fished the area thoroughly then crossed over to fish another flooded grass line, trolling along the edge and tossing our floats. Although the conditions were right with the water coming out of the marsh, we had no real bites. We picked up and ran up to the Jolley Rive and worked another shoreline. The anglers had a bite here and there but not takers. I switched young David to a jig and shrimp and he promptly picked up a nice Whiting to add to the box. We then ran further up the river to "Snook Creek" and within minutes Steve was putting another Slot Red in the boat, this one a nice 23" fish. He later tangled with a large Gar Fish that we got to the boat and broke off intentionally. We worked up the bank, tossing float rigs and then it was David's turn to tangle with a Slot Red. His float went under and he laid a gentle hookset on and, BOOM! FISH ON! The big fish was ripping drag but David was up to the task - he worked it patiently to the boat and landed a nice 24" Slot Redfish. And shortly after that we had another hookup, an even bigger fish, but this one must have been slightly hooked because it threw the hook just into the battle. We made one last stop back at Tiger Island, picked up a small Redfish and a keeper sized Trout, then called it a day, another great one to be fishing here at Amelia Island, Florida.
Posted by Anglers Mark at 7:48 PM