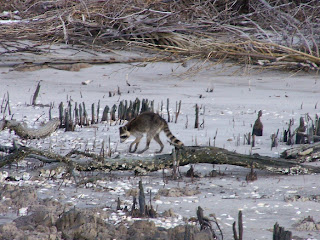 I finished up a few errands today and then dropped the boat in at Wilson Neck Boat Ramp, located in the Wilson Neck area of Yulee off of US17s. The ramp is on Gardner Creek which runs out to Nassau Sound so I eased out of the creek and ran West towards US17 and I-95. I've heard of folks catching Stripers up there so I took a couple of my Shimano Stradic 1000's on their 6' rods, rigged with Power Pro braid, Berkley Vanish leader and Sure Catch jigs tipped with Gulp shrimp. I ran all the way up to I-95 and fished the pocket 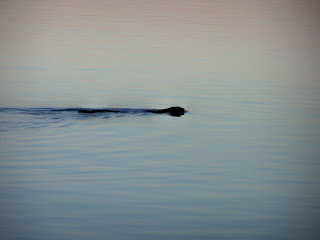 s and run-offs on a high, but outgoing tide. I Didn't have a bite. I fished some old wooden pilings at the Railroad bridge - no bites. I eventually picked up and ran east, past Gardner Creek and past Lofton Creek, all the way to Broward Island. The tide was still ripping out so I started on the south end of the island and fished with the current. I had a few small fish hitting a Gulp Swimming mullet - Pumpkin Seed color but no real bites. There was a raccoon on shore hunting for his dinner - looked like he had missed a few meals! Sure enough, as soon as the tide changed and started back in - WHAM- fish on! 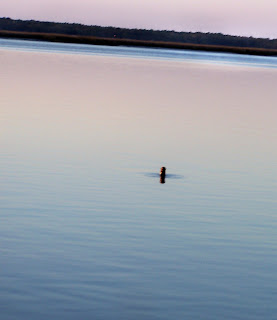 The 17" redfish hit the Gulp swimming mullet and I had a good battle to the boat. Shortly after that, I started picking up trout on the same rig. As the sun went down I had another visitor, this one very inquisitive. An otter swam out and circled the boat. Every once in a while he would rise up out of the water and check me out. I also saw a dolphin, a woodpecker and plenty of shore birds.
The sand gnats tried their best to eat me alive.
Posted by Anglers Mark at 9:03 PM No comments:

Trout season opens back up

The Speckled Trout season opens up in North Florida March 1st. The season has been closed all through the month of February but now anglers can keep legal bag limit of (5) trout per anlger. The fish need to be 15" in length with only one over 20" per angler.
Posted by Anglers Mark at 11:04 AM No comments:

I got a call from a friend of mine -Leon Freeman- yesterday who was on the water fishing near the bridge at the south end of Amelia Island; he said he had mess of whiting in the boat fishing the last of the outgoing tide. He was using pieces of peeled shrimp with a fish-finder rig on the bottom. These fish don't put up much of a fight, but they're plentiful and good to eat!
Posted by Anglers Mark at 11:01 AM No comments:

This letter came from the Coastal Convservation Association (CCA); I'm trying to stay away from politics but this directly relates to the fishing experience in Florida:

For the past 20 years Florida residents fishing in saltwater have been purchasing a saltwater fishing license. The licenses have generated over 200 million dollars which has been dedicated to marine research, management, and law enforcement. Since 1990 Coastal Conservation Association (CCA) and Florida Fish and Wildlife Conservation Commission (FWCC) have been working together to remove an exemption put into the bill at its inception. This exemption is known as the shoreline exemption, which allows Florida residents to fish in saltwater from the shoreline without a license.
Supporters believe that a recent amendment to the federal Magnuson - Stevens Fisheries Management Act, requiring states to “register” all saltwater anglers by 2010 and require payment for the license by 2011, should provide the push needed to eliminate the shoreline exemption in Florida. Florida’s current saltwater license would likely qualify for the federal angler registration program if the shoreline exemption was removed. If the exemption is not removed by 2011 recreational fisherman in Florida will have to purchase a federal fishing license that will cost between $15 and $20 on top of your Florida fishing license.
Currently, the Florida saltwater license brings in about 15 million dollars annually. The FWC has estimated that removal of the shoreline exemption would require an additional 208,000 to 302,000 anglers to obtain a license. Using the current base price on the resident license an additional 1.7 to 2.5 million dollars would be generated for marine fisheries research, management, and law enforcement. Also, every certified fishing license holder helps Florida obtain approximately $7 in Federal sport fish restoration funds.
Please contact your State Legislator and ask them to support the removal of the shoreline exemption in the saltwater fishing license. The removal of the exemption will start in the committee on Environmental Preservation and Conservation on the Senate side and Agriculture and Natural Resources policy committee on the House side. The Senate Chairman for the Environmental Preservation and Conservation committee is Sen. Lee Constantine and the House Chairman for the Agriculture & Natural Resources Policy committee is Rep. Trudi Williams.
Senate
Environmental Preservation and Conservation
Chairman Lee Constantine
constantine.lee.web@flsenate.gov 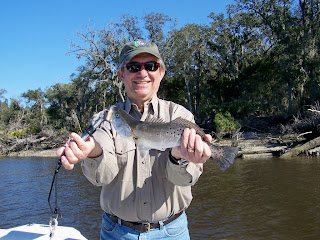 I had the pleasure of fishing with Gary Spielmann who was visiting Amelia Island with his wife and staying at the Elizabeth Pointe Lodge. Gary's fly fished all over the world -Russia, Alaska and the Northeast and he wanted to try his hand at the fly rod here on Amelia Island. I picked Gary up at Elizabeth Point and we drove to the south end boat ramp, launching around 12:30pm. The tide was due to be low around 1:45pm so we headed up to Broward Island and caught the last of the outgoing. As usual, the current was really ripping, but Gary was making some beautiful casts up around the downed logs, limbs and stumps. We didn't get any strikes so we moved around to a small feeder creek in Pumpkin Hill but didn't see any movement. The tide finally bottomed out so we cranked up and ran back to Broward to catch the incoming tide. I asked Gary to give the jig -n-shrimp a try and it wasn't long before he hooked up to a fiesty fat 18" trout. Gary had never fished with the jig-n-shrimp combo but he quickly got the hang of bumping the bottom and picked up a few more trout. There were a few times when he hooked up and fish broke off in the limbs. After a very cold week, Saturday's sunny weather was wonderful. We saw an otter, porpoise, an osprey and tons of other birdlife.
Posted by Anglers Mark at 8:19 AM No comments: 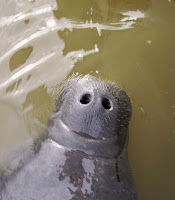 This article came to me from the Florida Guides Association Newsletter:

FWC annually conduct synoptic surveys to get an idea of how many manatees are out there. The survey normally includes observers from on the ground and in the air. Data from the synoptic survey are not used to estimate population trends, but rather represent a relative abundance within a year. This year's survey resulted in record high counts. See the following press release for more information.
FWC News Release: FWC records high counts during statewide manatee survey
For immediate release: January 28, 2009Contact: Carli Segelson, 727-896-8626 Photo and FAQs: Go to MyFWC.com and click on "Newsroom."

FWC records high counts during statewide manatee survey A team of scientists counted an all-time-high number of manatees during the annual manatee synoptic survey conducted the week of Jan. 19. The Florida Fish and Wildlife Conservation Commission's (FWC) Fish and Wildlife Research Institute (FWRI) reported a preliminary count of 3,807 manatees statewide. A team of 21 observers from nine organizations counted 2,153 manatees on Florida's East Coast and 1,654 on the West Coast of the state. This year's count exceeded the previous high count from 2001 by more than 500 animals. In both years, survey conditions were favorable for aerial observations. Although synoptic results are not population estimates and should not be used to assess trends, the FWC is encouraged by this year's high count. Survey results are consistent with population models that show the manatee population appears to be increasing in Northwest Florida, along the Atlantic Coast and on the upper St. Johns River. The synoptic survey is a count of manatees over a broad area. The survey provides researchers with a snapshot of manatee distribution and a minimum number of manatees in Florida waters at the time of the count. Researchers have been conducting synoptic surveys since 1991, weather permitting, to meet the state's requirement for an annual count of manatees in Florida waters. Weather and manatee behavior affect synoptic survey counts. The best conditions for the synoptic survey occur during the coldest months of the year, when manatees gather at warm-water sites. "Several cold fronts passed through Florida over a short time period, causing a large number of manatees to move to warm-water sites," said FWRI biologist Holly Edwards. "Good weather conditions allowed the manatees to be easily seen and counted, contributing to this year's high count." FWRI researchers are testing new survey methods that will provide a population estimate for Florida manatees as outlined in the FWC's manatee management plan. The adjustments to the survey will help achieve more accurate results and reduce dependency on the weather. For more information about manatees and synoptic surveys, visit http://rs6.net/tn.jsp?et=1102431957407&e=001hcPnvwR2_cqtuC3EJM_A4X-yt2pNiB3kQzral26H6pRdpNrovfm1BShoHvlehFQBEGtBakV7d5kt7akI21FXvNK19_24-cBw5Pwlq6Q9MK1kdY0d5lpDIg==. To report a dead or injured manatee, call the FWC Wildlife Alert Hotline at 888-404-FWCC.
Posted by Anglers Mark at 5:37 PM No comments: