I've been invited to speak at the April 20th meeting of the North Florida Fly Fishers in Gainesville, Florida. I'll be speaking on Fly Fishing Opportunities on Amelia Island (and nearby!) The club meets at the Westminister Presbyterian Church, 1521 NW 34th Street, Gainesville. Their socializing begins at at 7:00pm with the meeting starting at 7:30pm. Our Tourism Department has put together packets of information and I've added a number of brochures from Bed and Breakfasts, the Museum, Fort Clinch State Park, etc. Hampton Inn and Suites has donated a 2-night stay for the club to raffle off! If you've thought about joining a fly fishing club or are just interested in learning more about it and live near Gainesville, plan to join us that Monday evening.
Posted by Anglers Mark at 1:39 PM No comments:

Recipe of the Month: Scallops with Fennel and Bacon 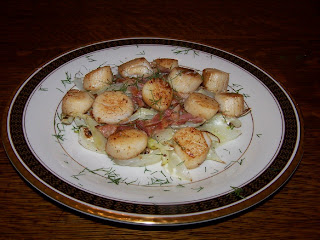 This is an easy recipe, taken from The Cook's Encyclopedia of Four Ingredient Cooking by Joanna Farrow:

Trim, halve and remove center root of fennel. Slice fennel, reserving and chopping 1/2 cup of the feathery tops. Blanch the slices of fennel in boiling water, 3-7 minutes, until soft. Drain.

Preheat the broiler oven to medium. Place the fennel in a shallow flameproof dish and season with salt and pepper. Dot the Mascarpone cheese on the fennel and broil for about 5 minutes, until the cheese has melted and the fennel is lightly browned.

Meanwhile, pat the scallops dry on a paper towel and season lightly with Konriko. Cook bacon in a large, heavy skillet until crisp. Drain and keep warm. Cook the scallops in the bacon grease 1-2 minutes on each side, until cooked through.

Transfer the fennel to serving plates. Chop the bacon into bite sized pieces and sprinkle over the fennel. Pile the scallops on the bacon and garnish with the reseved fennel tops.
Posted by Anglers Mark at 9:44 PM No comments:

Boaters World going out of business

If you've passed the local Boaters World store at the intersection S.R.200 and C.R.107 you've probably seen the large "Going out of Business" sign. First West Marine Express and now Boaters World! Liquidation prices are set at 10-30% off by the liquidation team and store employees do not have any authorization to change them. However, inside sources tell me that management is monitoring sales three times a day and have replacement signs with 50-60% off ready to go up as soon as they see sales volume drop during the liquidation, which is scheduled to last through June 20th. After they close, don't forget that long time local dealers such as The Boat House, Chelsea Marine, Ocean Outboard and Deonas Boatworks stock a variety of boat supplies and you can still rely on Amelia Bait and Tackle, The Bait House, and Leaders and Sinkers to have all of your fishing supplies. Another inside source tells me that West Marine is still considering opening another store in the Fernandina Beach area.
Posted by Anglers Mark at 2:55 PM No comments: 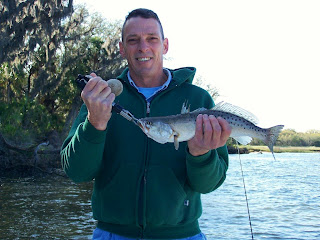 Ed Wisniewski's friend Larry Burns was visiting from NE Georgia so they decided to take in a backcountry fishing trip. There wasn't a cloud in the sky as we left the dock at 8am, but the wind was already blowing at least 10mph, and probably more so we headed directly for the Rayonier warehouse to get out of the blow. Throwing jigs with live shrimp, Ed quickly picked up a nice keeper sized trout. We moved around to the pipeline, staying behind the retention pond island and picked up a few more trout, then we headed to Tiger Island to stay out of the wind, which had picked up considerably. Ed ended up hooking up to a fat 18" trout and then he and Larry b 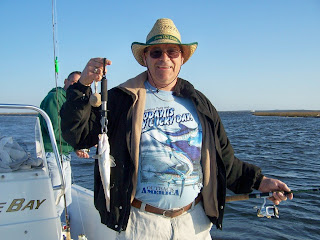 oth caught a few more, along with a couple of Sheepshead and some "baitstealers". With the island blocking the wind, we had a great time as the sun warmed us and made it very comfortable. In addition to seeing a dozen porpoise's, we also saw a sea otter, shore birds and an Osprey with his fresh caught fish. We all noticed that there weren't any boats out and we knew why as we turned the bow of the boat into the wind as we headed back to the dock!
Posted by Anglers Mark at 5:14 PM No comments:

The Nassau County Commission considered an ordinance last Monday that would create a no-wake zone around the North End Boat Ramp (Dee Dee Bartels). Check out the story by Ryan Smith in the Fernandina Beach News Leader
Posted by Anglers Mark at 9:31 AM No comments:

I fished with Mr. Bill Gass and his sons Chuck and Billy today. Our plan was to specifically target Sheepshead, the "thief of thiefs". I had purchased some nice fiddlers so we got an early start, leaving the north end boat ramp shortly after 7am. Our first stop was at the south jettie where we ended u 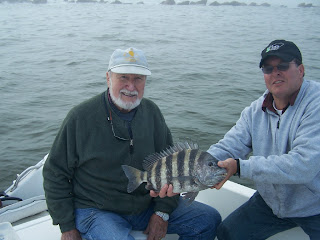 p trolling the rocks, jigging our fiddlers down to the bottom. Mr. Gass picked up the first Sheepshead of the day, a nice 22" fish that put up a ferocious fight. We moved back inside as the water began to crash over the jetties and found some marker pilings that we could back up to and sure enough, not 5 minutes after getting in postion, Chuck picked up a nice "thief" and then another, this one the largest of the day, a 27" fish. We moved on to behind Tiger Island where Billy got in on the action with another nice Sheepshead. They also caught a number of pinsfish, sea bass, mudfish, and even 12" shark during the day. We fished Landsford Creek for awhile then ran back out to the range markers, found a spot, and 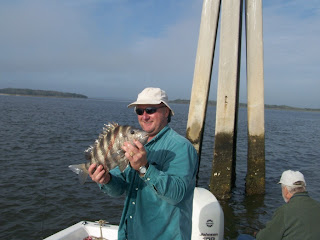 anchored up to finish the day catching whiting. On a personal note, Mr. Gass hired me to work at Hardee Brothers Hardware (now Fantastic Fudge) during Christmas breaks from college back in the late 70's and it was my pleasure to get to hook up with him and his sons to go fishing.
Posted by Anglers Mark at 9:04 PM No comments: 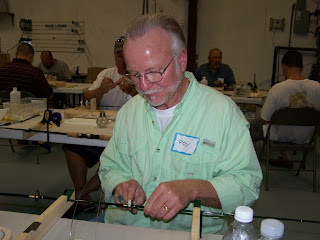 Don Hughes, Foy Maloy and myself traveled to the Orlando area (Oveido) this past weekend to participate in a Rod Building class put on by Mud Hole Custom Tackle, a rod building supply company. We left at 6:00am and drove downstate to arrive shortly before 9am. The class was led by Scott Gimbert, Vice President of Mud Hole and Todd Vivian, Vice President, Sales who did an excellent job of getting 14 novice rod builders started on a path to producing their own custom rods. We started with rod blanks, learned how to locate the "spine" of the rod, reamed out our cork grips and slid them down the rod and glued them. Then we glued the rod tip, marked the locations of the guides and then learned how to wrap the guides to the rods. We trimmed the wrapping, then protected the thread with some color guard and finally used epoxy to coat the wraps. Mudhole also provided us all with decals which included the spec's of the rod, a "Custom Built Rod by....label" and then we each got to pick out our own decorative decal (mine was a Redfish- go figure). The class lasted the entire day with mini breaks and a long break for lunch. On the drive back home we all agreed that the $99 fee was great deal: in addition to learning the basics of building a rod, we also learned how to 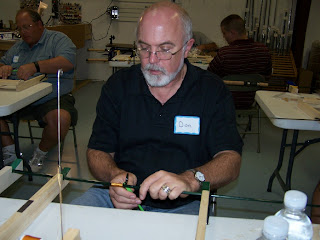 replace our tips and guides on older rods. We got a nice rod "custom" built and we brought home some left over supplies and a new table top rod wrapping kit. The consensus was that we would be planning our next rod building project soon!
Posted by Anglers Mark at 8:29 PM 1 comment: 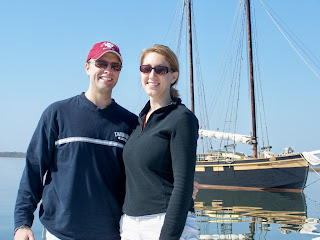 I had the pleasure of meeting Dr. Jeremy Hunt and his new wife, Joanna, who were visiting Amelia Island and staying at Addison on Amelia on their honeymoon. We left the dock at 9:30am this morning with only a light breeze and sunny skies and were treated rather quickly to a pair of porpoise's cavorting in the river. We toured Ft. Clinch then crossed over to Cumberland Island and found not one, but two small herds of wild horses. Jeremy showed me a trick to get close up photographs by incorporating binoculars and a digital camera. We cruised up the peaceful Beach Creek that drains out of the interior of Cumberland then crossed the channel and circled the Tiger Islands. Jeremy and Joanna are pictured here as we completed the trip. Congratulations to them both and I wish them a long and happy marriage!!
Posted by Anglers Mark at 2:26 PM No comments:

Carol and I wanted to do some leisurely fishing this past Sunday and went to the boat ramp at Sawpit Creek on the northern end of Talbot Island. When we pulled up to the ramp we found that another boater had backed their trailer down the ramp and it had fallen off the end of the ramp. There was an extreme low tide and this was the first time I've seen this happen at this ramp. Luckily another boater had pulled up to the ramp and offered to help by using his anchor to "grapple" for the end of the trailer; he lifted it up just enough for the beleaguered boater to pull the trailer up and out of the water. NOTE: The concrete ramp ended just a foot or two past the last cleat on the floating dock. If you're loading or unloading your boat at an extreme low tide, make note of where that cleat is and don't get your wheels too far beyond the cleat. We decided not to chance it with my trailer and ran north to Dee Dee Bartels ramp, launched and got in a couple of hours of fishing. Our live bait had died (that's my excuse) but we were able to get a few fish in the boat and enjoyed a beautiful day out on the water.
Posted by Anglers Mark at 3:59 PM No comments:

The 9th Annual Times-Union Redfish Round-up is scheduled for Saturday, April 4, 2009. This fun family catch-and-release tournament benefits the Safe Harbor Boys Home and will have up to 500 entries, making it North Florida's largest charitable redfish tournament. The low entry fee of $60 per boat will pay out$7500 (based on 500 paid entries) to the first place finisher, an angler who brings to the table a redfish with the most spots! The Captains meeting is Friday April 3rd, 2009 at Sisters Creek Marina, 6:30 PM. The tournament runs between "safe light" and 2PM
Posted by Anglers Mark at 3:53 PM No comments: