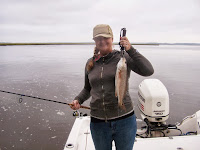 Bill Godek and his fiance Rachel had everything set up for their wedding, including a fishing trip today, just one day before they say their vows.  The couple were staying at the historic Fairbanks House which is just a few blocks from the Fernandina Harbor Marina.  I met Bill and Rachel early this morning even though we had overcast skies and forecasted rain.  But these two anglers were not to be deterred by a little rain! We headed out of the marina, pointed north, and ran up to Tiger Island to fish the logs with the tide having been coming in for about 2 1/2 hours.  Fishing with live shrimp on a jig, both Bill and Rachel began to catch fish.  Bill hooked ip early with a feisty Redfish and Rachel landed a Seatrout.  Then they both landed a few more Redfish.  We had the usual baitstealers - Snapper and even some rather large Pinfish.  Our next stop was up at Jolley River and with the water completely covering the oysters and up in the marsh grass, we switched to float rigs with about a 3 foot leader.  The wind had picked up a little bit and the anglers were casting into the wind. They got a few nibbles here and there and peresevered to pick up a few more hungry Seatrout, with Bill landing the largest of the day.  We rean further up into Jolley to "Snook Creek", fished it with jigs, but had no real bites.  Then we made a long run around to Lanceford Creek and fished a flooded grass patch to get another Trout or two, then made our last stop at Soap Creek where we picked up a couple of baitstealers and then  feisty Black "puppy" Drum to round out an Amelia Island Back Country Slam, and another great day to be out on Amelia Island waters!

Posted by Anglers Mark at 12:13 AM No comments:

Meeting The High and Incoming Challenge 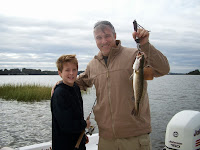 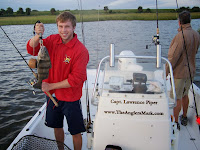 I'd set up a fishing trip today with Chuck Butler and his two sons Trey and Trenton and I had already noted that there would be a "high and incoming " tide as we began fishing.  But these anglers were up to the challenge and we ended up catching some really nice fish.  Our first stop was at Temptation Cove where we fished with live shrimp under floats.  Young Trenton hooked up early with a hungry Seatrout and as he was reeling him in Trey had a solid hookup and a fish fight on his hands.  Trey patiently worked th fish in and we soon landed a nice keeper sized 18" Black "puppy" Drum!  Not long afterwards his dad Chuck landed one, 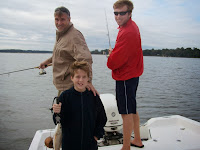 too. We made a run up into Lanceford Creek to fish some flooded marsh grass and here things really heated up.  Trenton had a huge bite that just kept on going!  All the anglers landed some hungry Seatrout then Chuck put a nice 17" keeper Trout in the boat.  Chuck had two good battles with big Redfish, one brief, and one extended when but the big Red got up in the grass and broke off. OUCH!  But Chuck was not to be deterred when again he hooked up.  This big Red also made for the marsh grass but Chuck was able to work him out slowly. After a
good battle we netted a nice 24" Slot Redfish!  We later checked out some flooded grass flats - saw no tailing Reds - then fished the logs of Tiger at the top of the high flood tide with no real bites.  Trenton landed a feisty Stingray then we move to the outside of Tiger to fish the first of the outgoing tide.  Both Chuck and Trey caught a few hungry Trout, Trenton had a feisty Redfish, then he wrapped up the day by landing a nice keeper sized Black drum.  With that, we called it a day, another great one to be out on Amelia Island waters!
Posted by Anglers Mark at 6:57 PM No comments: 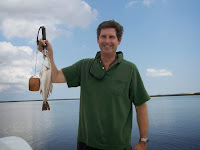 Boy what a beautiful day it was today!  I met Mark and Heather Adams at the Atlantic Seafood dock lat this morning, timed to fish the first of an outgoing tide.  We headed north and made our first stop outside of Tiger Island and tossed out some live shrimp under floats.  We picked up a couple of baitstealers and a couple of hungry Seatrout.  We then made a run up to the Jolley River to a large creek and fished as the tide swept out.  We only had a couple of mini bites but both Mark and Heather had spotted some tailing fish on the other side of large oyster bar.  We re-positioned ourselves and this turned out to to be the trick!  Mark had a strong hookup and after patiently working the fish, landed a nice Redfish!  I picked up a Seatrout then it was pure catching for a good while.  We landed a number of feisty Redfish and Mark caught a keeper sized Black "Puppy" Drum and also landed a Sandtrout which gave him an Amelia Island "Grande Slam", of sorts - Redfish, Seatrout, Black Drum, and Sandtrout.  We also caught a keeper sized Croaker and Whiting to go along with a few Pinfish and Perch - the ever present baitstealers.   We made a last stop behind Tiger and picked up a couple of more Reds as the tide eased to a halt, then headed in, counting it as another great day to be out on Amelia Island waters!
Posted by Anglers Mark at 9:52 PM No comments: 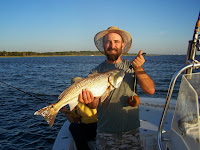 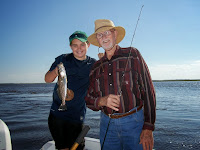 The Mannering family included a back country fishing trip in their family reunion activities this morning.  I had Matt Mannering and his son Mason and their Grandfather Bob and Uncle John meet me at the Atlantic Seafood dock at 7am and we headed north to fish the outside of Tiger Island on the first of an outgoing tide.  The anglers were armed with float rigs and live shrimp and began tossing to the grass line.  We had a number of nibbles and finally John got it started by landing a hungry Seatrout.  Matt got in on the action and he and John landed a few more Trout.  John tangled with a good sized Ladyfish and I as I was baiting a  hook I heard a drag begin to sing.  I looked up and saw Matt's rod bent over  and out beyond it I saw a big boil in the water, FISH ON!  Matt exclaimed that he saw the big fish come up and engulf his shrimp and the fight was on!  He played the big Redfish perfectly which tried a number of times to run under the boat but Matt wasn't having anything to do with that.  He kept the pressure on and eventually we netted the 29.5"  12lb fish!  Boy what a fish!  We fished the area for a while longer then made a run up to Jolley River and fished a large creek.  The anglers had no bites on the float rigs so we switched to jigs and shrimp and this did the trick.  All the anglers got in on the action, catching Seatrout after Seatrout with a couple of Croaker and Sanpper thrown in.  Most were in the 14" size but we had a few keepers toke home for fish sandwiches!   Our last stop was at a large marsh runout and here young Mason perfected his "method" and landed a Black "Puppy Drum" and a Flounder to round out his own personal Amelia Island Backcountry Slam.  With that, we called it a day, another great one to be out on Amelia Island waters!

Posted by Anglers Mark at 10:27 PM No comments: