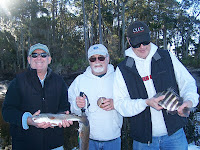 Michael Purser, Tim Ralston and Andy Hall were visiting Amelia Island with their spouses for a pre-holiday break and had scheduled a back country fishing trip on The Anglers Mark well in advance.  The weather was probably ordered up by the Chamber of Commerce because there wasn't a cloud in the sky, no wind to speak of, and the temperature rose to the low 70's.  We met at the Sawpit Creek boat ramp on Talbot Island and headed up the Nassau River to fish Bubblegum Reef on the very first of an incoming tide.  We found some Trout,  fishing live shrimp under a slip float and the anglers also caught some on a jig.  As the tide came up we made the run to Broward Island and began to fish just as the tide started in at that location further up the river.  BAM! FISH ON!  BAM! FISH ON!  BAM! FISH ON! The guys started hooking up on almost every cast.  I was huffing and puffing to get the hungry Redfish de-hooked, photographed, and released!  I guestimate that they caught at least 15 Reds if not more and Michael also caught a keeper sized Sheepshead.  Tim landed one Redfish with NO spots while Andy was working a slip float rig and catching fish.  When the bite slowed we ran up to Christopher Creek where the anglers again caught some hungry Redfish, about 6-7 in all.  With that, we called it a day, another great on to be out on Amelia Island waters!
Posted by Anglers Mark at 11:35 PM No comments: 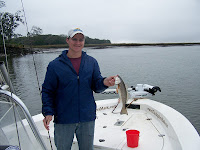 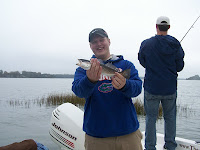 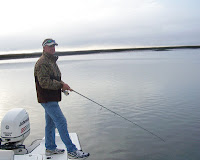 We had an unusual high tide yesterday when we launched The Anglers Mark - the water was way up in the grass and even covering the grass.  Zack Peyton and his friends Carl and Mark met me at the Atlantic Seafood dock at 10:30 at the peak of the tide and we headed up river to fish with live shrimp under float rigs.    I found it difficult to find my "spots" because the water was so high I couldnt' see my landmarks!  But these anglers were ready to work and after some of the water had left the marsh they began to pick up some hungry Seatrout.   Mark started it out then Carl and Zack got in on the action at Millie's spot up Lanceford Creek.  Later we hit a dock on Lanceford with no real bites then ran around to the Jolley River to fish the "Mother of All" spots.  However the tide was so high and the current running so stiff the MOA didn't pan out.  But on around the corner Zack found a ripple where the Trout were hanging and moved over to let Carl join in on the catching.  Jolley Bank had no fish but as the tide hit bottom we made our last stop at the logs of Tiger Island where Zack picked up a keeper sized trout with a jig on the bottom and also found the only Redfish of the day.  With that, we headed in, counting it as another great day to be on the water!
Posted by Anglers Mark at 10:26 AM No comments:

I know, they don't have anything to do with fishing! I have some of these on consignment at Amelia Island Liqours and they owners requested that I do an Elk and Bulldawg. You can tell by the picture that the Dawg is "antiqued".   See more at my Fish Craft page.

Posted by Anglers Mark at 9:15 PM No comments: