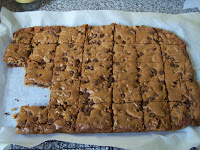 My Aunt Dumpy and Uncle Charles Grant lived here at Amelia Island when I was growing up and I've always fondly remembered Aunt Dumpy's Congo Squares. Come to find out, her recipe was very similar to her neighbor, Florence "Noonie" Partin and Mrs.Partin's niece  Julie is a friend of ours and she had the recipe.  I polled my cousins Susie and Trish for their recipes, merged it with the Partin recipe, baked a few test batches (the neighbors loved them) and here's what I came up with:

Melt butter in microwave, mix with sugar,  let it cool!
(I didn't the first time and when I added the chocolate chips they melted)
ADD vanilla
Add eggs
Stir until all is mixed thoroughly.


If not using Self Rising Flour,  add baking soda and salt to flour and sift a couple of times to get it mixed thoroughly.
Add Chopped pecans
Add 1 ¼ cup chocolate chips
Add coconut if you are using it

Add  sugar/egg mix to dry ingredients and beat with blender.  Spoon into “Large Bar Pan” (Pampered Chef-stoneware) lined with parchment paper and sprinkle the last 3/4  cup chocolate chips over top.  Bake  30 minutes on 325 degrees. Make sure the center is done.

Cut Congo Squares in bar pan then lift out parchment paper and put on cooling rack.

These are great served hot with vanilla ice cream.


Posted by Anglers Mark at 1:35 PM No comments: 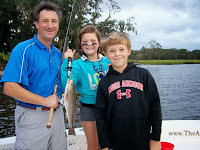 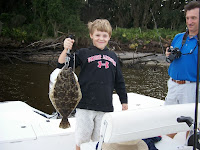 I had the pleasure of fishing again today with the Teseiro anglers - Don and his kids Trey and Marie.  The fishing trip was part of  Trey's 12th birthday celebration here at Amelia Island.   We met at the Fernandina Harbor Marina as the sun was coming up and headed straight to Tiger Island to get out of the northeast wind.  We had live shrimp and mud minnows and even a couple of small crabs to fish with and it wasn't long before these anglers were getting bites.  Marie started it off first by hooking up with a hard fighting feisty Redfish which she expertly landed.  Shortly after that Trey had a good hookup, played it perfectly, and landed another feisty Redfish - this one with 5 spots!  All of the anglers caught Multiple Snapper and added a few Croaker, too.  Don had a good battle with a hard fighting Black "Puppy" Drum.  Trey made a pinpoint cast to a pocket in the trees, worked his minnow slowly, and then the rod bent over, FISH ON!  This fish was causing the drag to sing but Trey kept the pressure on and after a long battle, landed a big 21.5" Flounder!  Boy what a fish!  This fish put's Trey into 3rd place in The Anglers Mark 2013 Bragging Rights Tournament (scroll down right side of this report for standings).  Don added a keeper Snapper, Trey landed the "ugliest" fish - a Toad Fish, and Marie wrapped it up with a pesky Croaker.  With that, we called it a day, another great one to be out on Amelia Island waters!

Posted by Anglers Mark at 4:46 PM No comments: 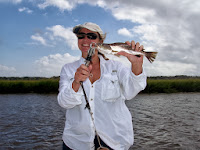 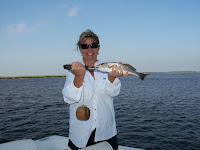 We had a beautiful sunrise today and even though the wind was already blowing 10+ we headed out to do some Amelia Island back country fishing.  Joel and Myra Godwin were visiting Amelia Island celebrating their anniversary so we met at the Atlantic Seafood dock in downtown Fernandina Beach, Florida this morning.  Our first stop was up Lanceford Creek to fish some dock pilings with jigs/mud minnows on the last couple of hours of an outgoing tide.  It wasn't long before the anglers were getting bites and soon Joel hooked up and reeled in a hungry Snapper.  Joel had bass fished his Georgia waters and quickly got the
hang of jigging and hooking up and eventually Myra got the hang of it too and reeled in a fat Snapper. Although the wind was picking up we pulled "anchor" and made a run north to Tiger Island and fished the vary last of the outgoing tide and then the incoming.  Again, the Snapper were present and this time Myra had the hot rod and picked up a few. Later she had a good bite, a hook up, and this time the fish fought differently.  The feisty fish put up a good fight but we soon landed a nice Redfish.  We fished the entire island but the wind was really beginning to blow so we headed over to Eagans Creek to fish some more dock pilings.  There wasn't much action going on but Myra did wrap the day up with a hungry Seatrout catch.  With that, we called it a day, another great one to be out on Amelia Island waters!
Posted by Anglers Mark at 4:41 PM No comments: 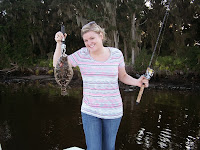 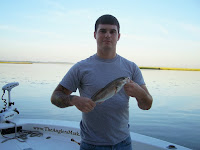 Boy what a beautiful day we had fishing on Amelia Island's waters!   I had met Chris Kimbrell and his friends Mike and Cassidy down at the Atlantic Seafood dock and we pointed The Anglers Mark nortah to Tiger Island.  There was just a slight breeze but the water was calm as we pulled up to the downed logs.  The anglers got busy casting jigs and shrimp to the shoreline and were soon getting bites.  They landed a number of rather large Croaker and added some fat Snapper to the catch.  Mike had a good fight with a feisty Redfish and before we left the spot Cassidy landed a keeper sized Flounder.  We moved to the outside of Tiger and broke out the float rigs and some live shrimp.  We had a really good flurry of bites and the anglers caught some hungry Seatrout, did battle with some Ladyfish, and then Chrisis landed a feisty Black "Puppy" Drum.  We ran up to the Jolley River and picked up a couple of more Trout and Chris reeled in another Flounder.  Our last stop was to the outside of Tiger again where they had a few more bites and then Mike had a big bite and break off as we were preparing to leave.  That wrapped up another great day to be out on Amelia Island waters!
Posted by Anglers Mark at 9:38 PM No comments: 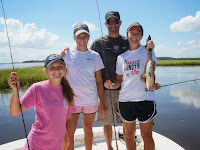 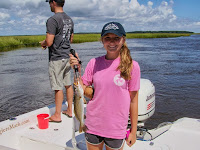 The last few days of rain and wind gave way to a beautiful day today.  I met Paul and Aimee Kirday, their daughter Abbie and her friend Brooke down at Atlantic Seafood early this morning and we headed north to fish flooded oysters outside of Tiger Island.  The anglers had a few good bites early and Brooke landed a hard fighting Jack Crevalle.  Paul later caught a couple of hungry Seatrout.  We checked out some spartina grass for tailing Reds, saw none, then fished the covered logs behind Tiger but had no real bites.  Our next stop was the Jolley River, fishing the flooded banks, but again had no real bites.  We eased up into the

marsh in a small creek and saw a big 'ole Redfish tailing way out in the middle of a flooded flat!  Unfortunately the flat was surrounded by thick marsh grass and I couldn't find an entry to get the bow into a wade-able area.  We did circle the flat and had some distant shots at the fish (and soon saw that there were more than one fish) but we just couldn't get close enough.  Our next stop was "Snook Creek" and here things began to pick up.  Paul started it off by catching a keeper sized Seatrout then all of the anglers got in on the action.  They caught a good handful of smaller Trout and gradually added keeper sized Trout to the cooler.  Both Aimee and Brooke had keepers and then Abbie caught the only Flounder of the day.   Aimee had a strong hookup with a big fish that took her from bow to stern but this fish just kept going with no intentions of being caught,  After another couple of keeper Trout catches, we called it a day, another great one to be out on Amelia Island waters!
Posted by Anglers Mark at 10:17 PM No comments: 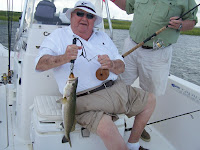 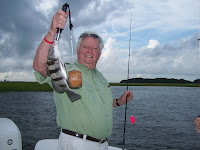 We had six bay boats lined up at the Atlantic Seafood dock this morning ready to meet the Herb Lottman fishing group of 12 anglers for fishing trips  into the back country of Amelia Island.  The group of anglers were staying at the 5 Star Elizabeth Pointe Lodge who had also arranged the transportation and box lunches. It was right at high tide so our first stop was outside of Tiger Island.  On The Anglers Mark, I had Herb along with his friend Roy and we started the day out tossing live shrimp under floats to the marsh grass edges.  It wasn't long before the two anglers were getting some good  bites then Roy hooked up with a nice keeper sized Seatrout to get the "skunk off the boat"!  Roy had the hot rod early and landed a few of the Seatrout and even though Herb was getting bites, they just weren't taking.  But then his float disappeared and his rod bent double, and, FISH ON!  He played the fish patiently and after a good battle, with the big fish running stern to bow and back again, we netted a big 22" Seatrout!  We continued to fish the area, picked up a few more trout and Roy had a good battle with a feisty Black "puppy Drum.  There was a big rain storm headed our way and just as Roy had reeled in another keeper sized Trout, the bottom fell out and it began to pour.  We pulled up the trolling motor and headed around to the lee side of Tiger Island to get out of the wind but we still all got soaked!  After the rain subsided, we made a run to Jolley River where we fished a small creek mouth.  Both Herb and Roy had hookups with high flying Ladyfish.  We fished Snook Creek and the MOA and had bites but no takers then we ran around to Bell River and fished some dock pilings. We only found one Croaker so we made a long run to Lanceford Creek where the bite heated up somewhat.  Herb's rod got hot and he landed a couple of nice Snapper then an 11-spot feisty Redfish.  Roy rounded out the day with a very nice Snapper.  With that, we called it a day, another great one to be out on Amelia Island waters!

Posted by Anglers Mark at 6:07 PM No comments:

My mother let me delve through her recipe box one day and I found this Spanish Cornbread recipe that was my Grandmother Lottie Garner's. It's a great addition to any fish fry or cookout! 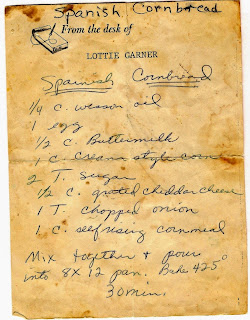 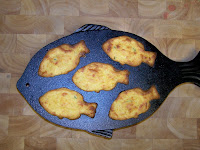 Posted by Anglers Mark at 10:28 AM No comments: