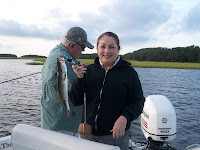 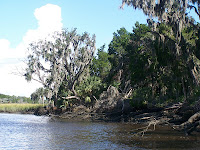 Margaret Gallardo and her two brothers Ted and Bob and Bob's wife Nellie took in an Amelia Island Back Country fishing trip today on The Anglers Mark. We met at the Atlantic Seafood dock at the City of Fernandina Beach marina this morning and headed up to Tiger Island to fish the first of an outgoing tide with live shrimp under floats.  We hadn't been anchored long when Nellie hooked up with a good fish and after a nice fight, she put a keeper sized Trout into the boat!  The anglers caught good handful of smaller Trout then Ted's line took off and the drag zipped on his reel, FISH ON!  He played the big fish perfectlly and I thought for sure it was going to be a big Redfish, but then it showed the tendecies of a shark.  Sure enough, after a long and expert battle, Ted landed a 3 1/2" Bonnethead shark.  We hit another area outside of Tiger then headed up to the Jolley River and again picked up a handful of smaller Trout.  As we fished Jolley Bank they caught a couple of more Trout, some "baitstealers" and a nice Croaker.  Then Bob let everyone know that he had a fish on, and boy did he!  He played the big fish perfectly and worked it patiently to the boat where we netted a nice slot sized 24" Redfish.  Now that, with some grits and hushpuppies, will make a good meal!  We hit the logs of Tiger Island and then headed in, counting it as another beautiful day to be on Amelia Island waters!

Posted by Anglers Mark at 4:11 PM No comments:


Posted by Anglers Mark at 9:49 PM No comments:

You Name It, We Caught It! 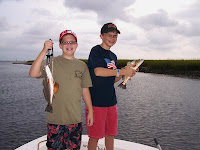 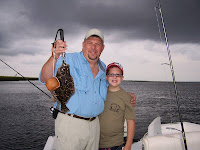 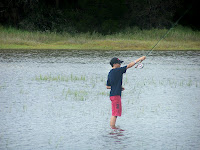 It was a very nice morning today, very little wind, overcast, and not too hot.  Jim Maggard had planned to treat his two sons Bryson and Zachory to an Amelia Island back country light tackle fishing trip on The Anglers Mark, so we met at the Atlantic Seafood dock down at the City of Fernandina Beach marina at 7am this morning - just after sun up.  We headed up to the Jolley River, loaded for bear!  We had (4) jig rods, (3) float rig rods, and (3) 8w fly rods and a live well full of shrimp.  We eased up to the exposed oyster beds and the anglers began to toss the jig rods with shrimp up near the bank and it wasn't long before they were catching fish.  They had a few Black (puppy) Drum, a few feisty Redfish, a couple of Ladyfish, and whole "mess" of Snapper, some Croaker, a Bonnethead Shark, a Stingray and a very nice keeper sized Flounder!  We moved on up the river and they picked up a couple of more Snapper then we made a run to behind Tiger Island to fish the downed logs, catching another couple of Snapper and a Croaker.  The tide was high and the oysters were covered by now so we moved to the outside of Tiger and with our last handfull of live shrimp, the anglers caught 5-6 nice Seatrout to round out an Amelia Island Back Country Grand Slam of Redfish, Flounder, Drum and Trout!  We were expecting a flood tide today so we strung up the fly rods and ran to 3-4 flooded grass flats to check them out.  On the last one, Jim had the good eye and spotted a lone "tail" feeding in the flooded grass.  Bryson and I waded out but we hadn't gotten too far from the boat when it disappeared, not to be seen again.  Bryson got in some blind casting then we headed back to the boat and headed in, counting it as another great day to be out on Amelia Island waters!
Posted by Anglers Mark at 6:35 PM No comments:

All of a Sudden 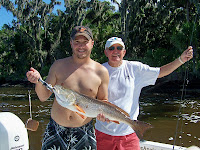 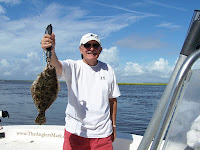 Jack Reynolds had arranged an Amelia Island fishing trip this morning for he and his son and after two days of getting drenched and a forecast of 40% chance of rain, I was sure that today would be more of the same!  I met Jack and Brett at the Atlantic Seafood dock at 7am this morning and we headed up to Jolley River with a baitwell full of live shrimp and Cocahoe (mud) minnows on the last of an incoming tide.  The wind was already blowing over 10mph and was expected to get up to about 16mph, and I think it did.  This made it difficult for the anglers but they persevered and caught a good variety of fish.  They'd pick up a nice Trout here, and a nice Trout at the next stop, but the bite never seemed to take off.  Every once in a while they'd reel in a fat Grey Snapper but they were just a little undersized.  We ran around to the front of Tiger Island and Jack hooked up and caught a nice sized Flounder.  We fished behind Tiger and again, they picked up some Snapper, but then, all of a sudden,  Brett's rod bent and his reel drag ripped, FISH ON!  He couldn't have played the fish any  better and after a good battle, we netted a 29 1/2" oversized Redfish, putting him in 2nd place in the Anglers Mark Bragging Rights Tournament, redfish category (see right column for standings)!  We snapped some pictures and released the big guy to swim off and have a better day.  Continuing to fish behind Tiger, Jack again caught Flounder, but this one had some size about him.  Jack patiently worked the fish to the boat and we netted a Flounder of keeper size.  We fished some Lanceford Creek docks, had some nibbles, then wrapped up the day at Rayonier warehouse.  Jack was working the stern of the boat and had a strong hookup and a long battle on his hands.  He worked the fish up and I netted a very nice 14" Black Drum. With that, we called it a day, another great one to be out on Amelia Island waters!
Posted by Anglers Mark at 10:04 PM No comments: 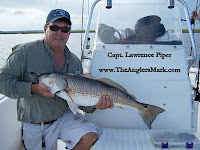 I got to fish today with Tim Parker, A.B.E. of Temptation Bait's.  He and his brother Brian met me in the dark this morning at the Sawpit Boat ramp at Big Talbot Island Park.  We wanted to get out early so we skipped all live bait and went with some of Tim's new shrimp colored and shrimp flavored ribbed grubs and some topwater lures.  We motored up the Nassau River with the lights on and got to the Horsehead area just as the sun was coming up.  We were fishing over some flooded oyster beds on the last of an incoming tide and Tim was throwing the grubs while Brian and I were tossing topwaters.  Both Tim and Brian hooked up with Trout as we trolled through the area.  We moved on to the mouth of Jackstaff Creek, had no real bites, then eased into a smaller creek and the action heated up.    Brian and Tim again caught a few Trout but when we saw a big boil up near the grass line we all perked up.  After the fish wouldn't eat a topwater, I tossed one of Tim's Temptation Bait 4" Ribbed Shrimp Grub just beyond the boil.  I felt my jig bounce over an oyster, then BOOM!  FISH ON!  And it was a big one!  We fought the fish around the boat a couple of Times but my Shimano CI4 1000 reel and Terramar rod was up for the challenge.  With a lot of coaching we were able to land a 33 1/2" oversized Redfish!  We snapped some pictures and the beast swam off with a strong - and somewhat ticked off - demeanor!  We continued to fish and both Brian and Tim had Redfish hookups.  We added a few keeper sized Trout and a couple of keeper sized Flounder - all on the shrimp flavored Temptation Bait ribbed grubs.  Did I mention we got wet a couple of times from rain showers?  But it was a great day of fishing here at Amelia Island.
Posted by Anglers Mark at 9:59 PM No comments: 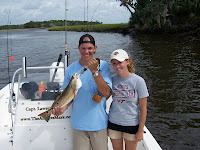 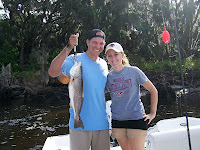 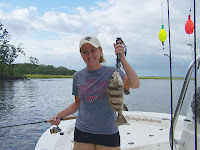 .....a couple of times this morning, but the fishing turned out great.  I had checked the weather report last night and it called for a 20% chance of precipitation and I think we got all of it between 8 and 9!  I had met Mathew Shelor and his fiance Katie at the Atlantic Seafood dock at 7am this morning. If you looked south the skies were OK, but if you looked north, there was huge, dark thundercloud. And that's the direction I wanted to go!  So we headed west.  We ran up Lanceford Creek and fished a flooded oyster flat and grass clump and Katie broke the ice early by hooking up with a couple of feisty Redfish and a Snapper.  The weather appeared to clear north so we pointed toward Tiger Island, but on the way the rain came down with so much ferocity I had to slow down to a crawl in order to see, and we all got soaked!  But we ran through it and made our way to a nice looking spot.  I "anchored" with the Minnakota I-Pilot and just as the anglers got their float rigs baited, the bottom fell out again and the wind picked up to an unbearable blow.  Soaked with rain again, we cranked the big engine and rain around behind Tiger Island and immediately found protection from the wind and the rain quit.  We tied up at first (for me to gather my wits) and Katie again found some Snapper.  Later, as we trolled along the shoreline, Katie picked up a couple of fat Seatrout and as Matt was pulling in a Snapper, she hooked up with  hard fighting keeper sized Black Drum.  Katie was getting all the pictures and was having a lot of success on the boat and graciously offered the bow to Matt, when his rod bent over and drag ripped out - FISH ON!  This fish was big and fighting hard, but Matt played it perfectly and with Katie on the net, they landed a nice, 23" Slot Redfish!  We continued to fish the island, staying out of the wind.  The two anglers already had an Amelia Island Back Country Slam of sorts with Redfish, Drum and Seatrout, but they also added a couple of keeper sized Flounder, a couple more Trout, and Matt wrapped up the trip by landing a nice, keeper sized Sheepshead.  All fish caught today were released to be caught another day.  With that, we called it a day, another great one to be out on Amelia Island waters!
Posted by Anglers Mark at 9:19 PM No comments: