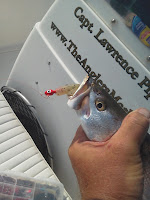 I was able to get out and fish the Amelia Island back country waters Saturday before tropical storm Beryl came through the area.   The early morning breeze was nice to have as I eased along the exposed oyster banks during the very first of an incoming tide.  I tried a 7w and 8w fly rod from the stern of my boat, using the Minn Kota I-pilot 101's auto-pilot feature to ease along the bank as I blind cast to the base of the oysters.  Although my casts were spot on, I felt like the weighted fly just wasn't staying in the strike zone very long, so I switched to spinning tackle and after about the second cast with a Temptation Bait grub, I picked up a hard hitting, keeper sized Seatrout.  I found that the Trout were hungry and went on to catch 5-6 of them with one more in the keeper size.  My friends Don and Sue Hughes were out also while fishing the finger jetties at Fort Clinch with live shrimp on the bottom, caught a great mess of Flounder and added a large 19" Sheepshead.  The fish are biting and the storm has passed, so plan to Get Away From it All and....Let's Go Fishing!
Posted by Anglers Mark at 12:31 PM No comments: 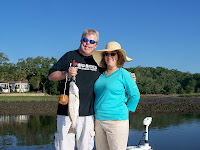 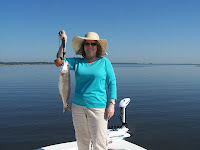 Teresa and Tom Gaslin made the short trip to Amelia Island, over from Orange Park, to celebrate their 33rd wedding anniversary.  Teresa had set the trip up as a surprise for Tom and luckily we had a "perfect 10" in the weather category.  They were staying at the Hampton Inn and Suites and within walking distance to the marina so we met at the Atlantic Seafood boat ramp at 7:30am and headed out to our first spot.  I had decided to fish the docks of Lanceford Creek on the very last of an outgoing tide.  The couple knocked the rust off of their casting fairly quickly and we were soon working the pilings with jig and Gulp Shrimp's.  Although they had a little nibble now and then, there wasn't much biting.  Then, as I was leaning down to take care of something, I saw Tom cast to an exposed oyster bank and the minute it hit the water I heard the sweet sound of drag being ripped out!  FISH ON!  Tom played the fish perfectly and after a good battle, he worked in to the net a nice, Slot sized Redfish!  WHOOEE!  Skunk off the boat!  We worked the area for a short while then headed up to Jolley River to fish an oyster bed bank on the first of an incoming tide.  Tom picked up a couple of small Trout, Teresa fought a Lady Fish to the boat,  then we had another strong hookup and Teresa battled in another Slot Red.  Later, Teresa made a good cast to the oyster bank and as she bumped it back, her drag zinged and FISH ON!  She again played it perfectly and landed another Slot red.  Before we left the area, Teresa had also treated us to a long battle with a 3'+ Bonnethead Shark.  We hit a couple more areas, but the sun was up and the bite had slowed, so we headed in, counting it as another great day to be on the water!
Posted by Anglers Mark at 8:58 AM No comments: