Boy the temperatures sure have gotten higher the last two days here at Amelia Island!  I had met Clint Davis, his daughter Lindsey and her friend Nathan down at the Sawpit Creek boat ramp and with only a slight breeze and clear skies, we made the run up the intercoastal to dip into Jackstaff and begin fishing with jigs and live shrimp. We worked the bank slowly and it was Lindsey who "knocked the skunk off" when she landed a hungry Seatrout. Although we had some nibbles here and there, that was the extent of our fish catch along that stretch!

We ran thru Horsehead and around to some docks at Seymore's Pointe and here Nathan got on the board when he hooked up and landed a hard fighting Black "puppy" Drum.  Then Clint felt a bump on the bottom, set the hook, and reeled in a keeper sized Seatrout.

Our next stop was down at Broward Island, fishing the very, very last of the outgoing tide. We had no real bites until the tide turned back in, then we caught a couple of Trout and had a nice Sheepshead to the boat. We fished north and south then made the run back to Seymores.

Here, things heated up a bit, drifting float rigs along the marsh grass and both Nathan and Lindsey put Trout in the boat, with one of them being keeper size.  Our final stop was down at Spanish Drop and now the wind had picked up and was blowing. But we found a good ambush point and both Lindsey and Nathan caught some feisty Redfish. Clint added a Trout then Lindsey wrapped things up with another Trout catch. When we totaled up the fish we realized we'd caught a good handful and counted it as another great day of fishing here at Amelia Island, Florida.
Posted by Anglers Mark at 7:16 PM 2 comments: 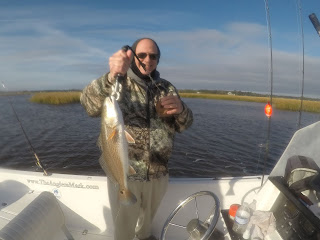 I've had a busy last couple of days! Coming back from Christmas, I went with the Blalock Fishing Team yesterday morning. The wind was up but we were able to find places to fish. Both William and Dara had some good Trout and Redfish catches early at the logs of Tiger Island, fishing live shrimp on the bottom with the tide just starting in.  We then fished a grassy pointe at Bell River to no avail, then made a long run down the Amelia River to set up between two docks, now dubbed "the DW". We were fishing in about 4' of water, high and incoming tide, over some shell beds. The fish bite was non-stop for at least an hour, one after the other - Redfish and Seatrout, with many of them of keeper size (all fish caught this morning were released).  Things finally slowed  and we ran back to Lanceford Creek. After battling the wind in a couple of spots we found shelter, and fish! A few of the biggest Seatrout of the day were caught, then we called it a day, another great day of fishing! 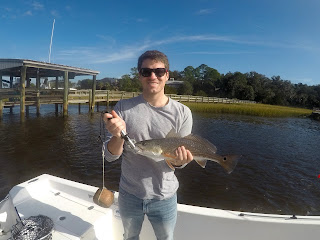 I met Jack and Motsi Hanna and their son Jay after lunch and although I surely thought that the "DW"wouldn't still have fish, it was worth a try, so we made the run, set up and BOOM! One Redfish after the other. They started off just undersized but after we got them out of the way, the trio began to get Slot sized fish. We boated their limit of fish ranging from 18-19" then we began to cull when we got fish over 20". We actually got tired of catching fish! We then came back to Lanceford and tried a couple of spots but the wind was really up and blowing so we wrapped it up and came back to the ramp and put some Redfish filet's on ice! 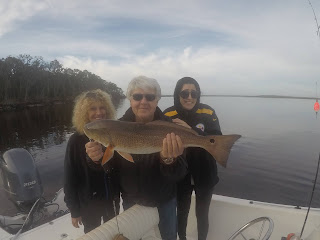 I fished this morning with Paul Wozny,  his wife Elaine, and their daughter Kateri, meeting them out at the Goffinsville Park boat ramp. The tide was still barely going out so we buzzed down to Broward Island and began fishing the logs with jigs and shrimp. We had not bites initially but when the tide changed and started back in, we began to get fish. After putting a couple of small but feisty Redfish in the boat, we hooked up and landed a keeper sized Sheepshead. Then we had a strong bite and, BOOM! Big Fish On! Paul played the big fish perfectly and patiently and after a good battle that took us to the deep part of the river, Paul landed an Oversized 29.25" Redfish, boy what a fish!  We then came back to Seymore's Pointe and eased in between two docks and took up the float rigs with live shrimp. Fishing a few feet off the bank, all three anglers caught and landed some nice keeper sized Seatrout. Paul had one of the biggest, a 21.5" Gator Trout! Again, the wind had picked up so we made a quick tour thru Horsehead then headed in, counting it as another great day to be fishing here at Amelia Island, Florida.
Posted by Anglers Mark at 5:24 PM 2 comments:

Starting a Christmas Holiday Off Right 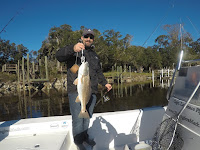 The Blalock's were back in town for the Christmas holiday - Bob, his son William and daughter-in-law Dara. I met them out at the Goffinsville boat ramp and boy was it a "cool" one with temperature's just a tad bit under 40. The sun was coming up and there was enough fog to keep me from opening it up most of the way down to Broward Island. The tide had a couple of  more hours to come in so it wasn't such a great time to be fishing Broward but I thought, being that we were right there, we might as well try it. The Blalock team are excellent anglers and were making pin point casts 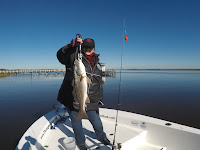 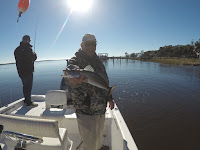 to the bank but the fish just didn't cooperate until finally, William hooked up and put a small Sheepshead in the boat.

We made a run back to Christopher Creek and fished some docks and it seemed like we just weren't going to get many fish when, BOOM! William had felt a fish pick up his jig and shrimp combo and move off with it and after he set the hook, Big Fish On!  William played it expertly and luckily the fish headed for deeper water so all William had to do was be patiently and land the big
23.35" Slot sized Redfish. All fish caught today were released. We worked around the bank and as we reached a grass line all three anglers put Redfish in the boat, with one of Dara's being in the Slot.

Our next stop, after coming out of the creek was down around Seymore's Pointe. We fished a grassy pointe that looked like and excellent ambush pointe but had not takers, then after a "tip", we set up along a bank of grass that had submerged oysters and Wow! Crazy! We started catching fish, one after the other: Keeper sized Seatrout. Keeper sized Slot Redfish. Keeper sized Black "puppy" Drum. Keeper sized Sheepshead. Keeper sized Flounder. The bite was on fire and we took advantage of it, fishing down the very last shrimp in the well! Again, all fish caught today were released, and it made for a great day of fish pre-Christmas fishing here at Amelia Island, Florida. 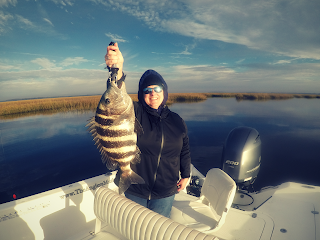 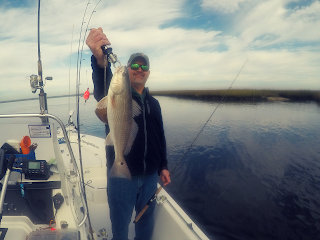 With less than two weeks left in the year for guest anglers on the Anglers Mark to vie for bragging rights for the biggest fish caught during the year, we had a huge Sheepshead caught today that landed in first place for the 2018 Anglers Mark Bragging Rights Tournament!

I had met Tom and Kelli Middleton down at the Sawpit Creek boat ramp early this morning and after running up the intercoastal to deep into Jackstaff we set up at a large marsh outflow and began tossing live shrimp under floats on a high and outgoing tide. Although we had a nibble or
two we had no takers so we eased forward with plans to fish a marsh bank. We had only move thirty yards when both anglers began to get bites, then hookups, and then Seatrout catches. It was a good flurry of catching then Kelli had a good bite and this time her drag began to rip. I was a little concerned that I had set the drag to light and that a decent Trout was ripping the line out, but boy was I mistaken! Kelli played the fish perfectly and a after a good battle, landed a big 21.25" Sheepshead and garnered 1st place in my Bragging Rights Tournament. (scroll down the right side of this report for standings).

After fishing that bank we moved back into Jackstaff and worked another bank  and here Tom put the first Redfish in the boat. We picked up another Trout or two before we made the run thru Horsehead and over to some docks. Although we had no real bites on jigs and shrimp around the pilings, we again picked up another Red up near the marsh grass.

Our next stop was down at the Spanish Drop area and here we stuck with the jig rods. Tom was makin excellent casts to another marsh run out and after he had a hard "bump", he set the hook and, Fish On!  He played it patiently and soon landed the first Slot Redfish of the day. He went back to the same spot and after a couple of casts, he picked up another nice Redfish.  After fishing one more shell lined bank in that area we made a final run down to Broward Island, still fishing the outgoing tide, which had gotten down pretty low, and the fish catching got hot! 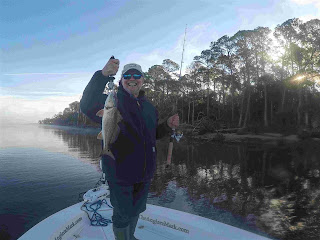 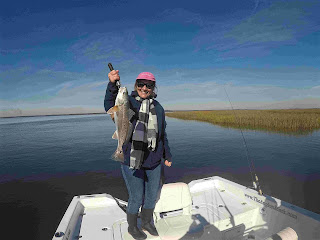 Whooooeeee! It was 38 degrees when I met Bob and Adrianna Reynolds out at the Goffinsville Park boat ramp this morning and fog covered the Nassau River, enough so that visibility was only about 50 yards. We puttered thru the fog down to Broward Island and began pitching mud minnows on a jig up to the bank. It took a good handful of casts but finally Bob had a strong bite and, BOOM! Big Fish On! He and I both could tell that it was a big fish - it was digging deep hard and ripping the drag - but Bob was playing it perfectly and patiently and...BAP...fish off! Ouch!   And only a few minutes later Adrianna had a similar hookup, except her big fish started
heading towards Orlando and...BAP....fish off!  In retrospect, I wonder if the drags were just so cold and hadn't been used all morning and they had less "give".

But these two anglers were not to be deterred and as we worked the bank they began to catch some feisty Redfish. Bob picked up a Seatrout before we left the area.

We fished some docks at Seymore's Pointe and Bob hooked up and landed another Red then we cruised down the Nassau to fish some marsh grass and flooded shell beds. Adrianna got hot and caught 2-3 Redfish with one of them being in the Slot size (and with 13 spots) then Bob warmed up and put another Seatrout and then a Flounder in the boat to garner his Amelia Island Back Country Slam of Redfish, Seatrout and Flounder.  The sun had warmed things up and it made for a great day of fishing here at Amelia Island, Florida.

Posted by Anglers Mark at 6:59 PM No comments: