Just Go To A Different Dock 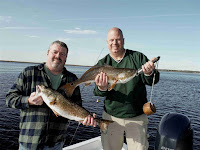 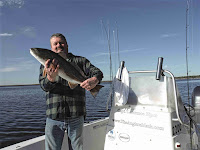 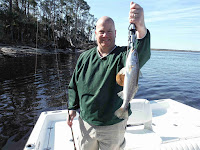 The temperatures dropped last night and when I met Roger Pickett and his fishing buddy David down at the Sawpit Creek boat ramp the air temp was still in the 40's. But the skies were clear and the sun was coming up and it felt like it was going to be a good day...and it was! We ran up the Nassau River, straight to some docks at Seymore's Pointe, and began to fish jigs and live shrimp to the pilings. Although the guys were making excellent casts, dropping their presentation at the pilings and letting it fall to the bottom, we had no real bites after hitting two sides of one dock. We moved on to another and that did the trick. In no time at all, both
anglers were catching fish. As long as they got their baits up near the pilings they'd usually get a hookup on some feisty Redfish.

When things finally slowed we moved on down the line and fished another dock. But this one didn't have the magic and after fishing Bubblegum Reef briefly, we went around the corner and fished some rocks with float rigs and live shrimp, getting the presentation right up near the rocks. Again, it only took minutes and BOOM!
Big Fish On! David was on the rod and he patiently played the fish, letting it run deep and rip the drag. But after a good battle, David brought to the net a nice 26" Slot Redfish. (All fish were released today). Roger followed that  up with a 27" Red then both he and David had a double hookup and both of them landed Slot sized fish. Once they were released the two angler went back to the rocks and BOOM! Another big fish on! Roger worked hard to keep the fish out of the pilings and once he had him out he kept the pressure on. It was along fight on light tackle, but patience paid off when Roger landed a big 30" oversized Red- big enough to kick off the 2018 Anglers Mark Bragging Rights Tournament, 1st place in the Redfish category!  The two anglers picked up a couple of more Reds and Roger added a feisty Sheepshead before we made a run down to Broward Island, getting there just in time for the first of an incoming tide.

Broward wasn't on fire but the two anglers did pick up a couple of more Reds; David added a keeper sized Seatrout and Roger followed that up with one of his on. David had what may have been the biggest fish on the day on, but after battling the fish out from the bank, it must have found an old log to swim under. The line went tight and locked down, a sure sign of the fish wrapping around something and then BAP! Big fish off! But both anglers had caught a bunch of fish so we called it a day, another great one to be fishing here at Amelia Island, Florida.
Posted by Anglers Mark at 6:03 PM No comments: 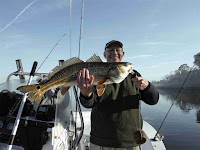 Although the river was socked in with fog as we started out this morning, Bob Blalock and I both had a feeling we might have some good fishing today. We met out at the Goffinsville Park boat ramp and after leaving the dock, crept through the fog, all the way down to Broward Island. After I got the boat locked in on anchor, Bob made his first cast up along side a downed log and...BOOM! Redfish on! Now that's the way to start a fishing trip. Bob was fishing with a 1/4oz jig and live shrimp and making excellent casts to the logs and it paid off. We picked up 3-4 small Reds then a nice keeper sized 17" Seatrout. 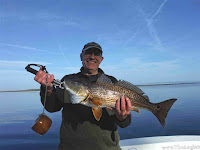 As things slowed we moved up the bank, working the logs and when Bob hooked up again and his drag began to rip we new this was a bigger fish, and boy was it! The fish ran deep and under the boat - I was too busy filming but eventually moved the boat to catch up to the fish. Bob worked it patiently and soon landed an oversized 28.5" Redfish (the biggest of the year - and it kicks off  the 2018 Anglers Mark Bragging Rights Tournament). We continued to fish and shortly after Bob put a 25.5" Slot fish in the boat, then a 20" Slot fish and I added a 19.5" Slot Red.

When things finally slowed we ran back and around to Seymore's Pointe and fished some docks, picking up another feisty Redfish. The sun was getting up and the day had turned out really beautiful and we had one more stop to make, this one back at Christopher Creek. Bob pitched up between some docks and pulled out on Red then further around found one more Red up near a small stump. And with that, we called it a day, another great one to be fishing here at Amelia Island, Florida.

Posted by Anglers Mark at 6:39 PM No comments: 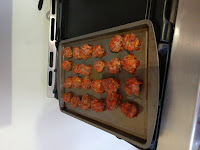 Mix all ingredients together. Spray baking pan (one that has sides) with cooking spray.
Wet your fingers and roll sausage mix into 1" balls and place on sheet. Cook for 15-20 minutes at
375 degrees.  Check the balls at 15 minutes and reposition pan if needed to get an even cook. Cook until browned.
Posted by Anglers Mark at 4:59 PM No comments: