Bombs Away in Nassau

If you're fishing the Horsehead area and happen to hookup with something that looks like a bomb you probably need to practice "catch and release"...and then get away as quickly as possible! See the News Leader story at HERE
Posted by Anglers Mark at 10:26 PM No comments:

Windy but Worth It 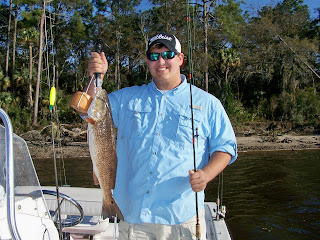 I fished with Tommy Hinson, son Brandon and their friend "JB" this afternoon and we enjoyed a beautiful day of sunshine, even though we faced some tough conditions with winds in the 15-20+ knot range. Again, I might add! I've found that the month of March will tease you with some beautiful weather then challenge you with some winds that make even the experienced angler wince! We hit a number of spots - Spanish Drop, Bubble Gum Reef, Jackstaff, all on the last of an outgoing tide with 62 degree water temperature, then headed for Broward Island in hopes to enjoy fishing the incoming tide. However, the west wind blew and blew, keeping the tide and current pushing out. We made one pass of the entire island with only a few bites, then circled back and made another pass when Tommy finally hooked up with a nice Trout and then shortly after JB had a hookup. With the wind and current and downed trees, I even thought he may have had a snag, but he assured us that this was a FISH and and by the way the drag was ripping off and the pole was bending, we new he had a big fish. The fight took JB from the bow to the stern and from port to starboard, around the engine and after patiently wearing the fish out, we netted a slot sized
26" 6lb Redfish. We looped around and made another quick pass and Tommy hooked up with a hard fighting fish, played it perfectly, and boated the 17" Redfish. After a few more bites, and the sun beginning to fall, we headed in, counting it as another great day to be out on the water!
Posted by Anglers Mark at 10:44 PM 1 comment:

Kenny and Aimee Lee were in town from Savannah with their brothers, Tyler and Adam and took in a fishing trip with me this morning. The weather report called for 16knot winds and we had that, then some, but the fishing party was up to the challenge so we left the south end boat ramp at 7:30am with the tide just beginning to fall. I thought the best plan would be to run to Broward Island in hopes that the land mass would block the wind but unfortunately it was still wreaking havoc with the boat positioning and casting. We tried a couple of spots before finding shelter at Seymore's point and it wasn't long before Tyler had hooked up to a nice fighting Redfish. 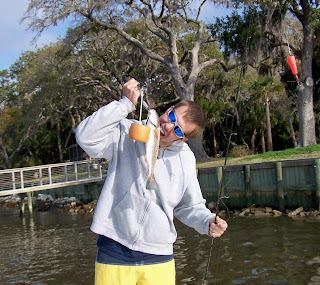 Tyler had cast his live shrimp under a weighted popping cork up near a dock and rocks and as it drifted with the tide, the Red took it and ran. We fished there a while longer then ran to Nassau Sound to join a dozen boats fishing for whiting. We boated a few then hit a couple of more spots, adding Sand Trout, Speckled Trout, and a few "baitstealers" to the species list. Even though the wind made for some difficult fishing, we all agreed that it was great to be out on the water!
Posted by Anglers Mark at 7:28 PM No comments: 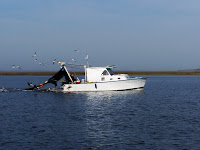 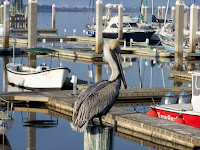 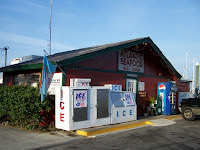 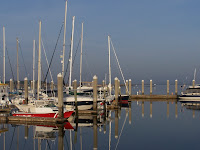 Posted by Anglers Mark at 9:25 PM No comments: 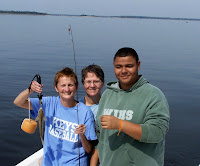 This morning I fished with Joyce Hanula, Joan Warren and son Max. We had the nicest morning that we've had in a long time with sunshine and just a slight breeze with a low tide estimated to arrive a little past 9am. We ran up to Jolley River and began a troll along the banks of exposed oyster beds. The conditions were perfect and after the anglers warmed up their casts were on target. We hit 3-4 spots in Jolley, all of them beautiful and I expected to have a hook-up at any time, but it was not to be. We eventually ran around to Tiger Island and again began a troll of the island with perfect conditions, but after two passes and some sand gnats beginning to pester us, we decided to head for the open waters of Cumberland Sound. Anchoring in 24' of water, the anglers dropped their pieces of peeled shrimp to the bottom and it wasn't long before all had hookups on nimble whiting. Max was keeping score and the crew ended up catching over 15 whiting for the short hour we were there. After a brief tour of Ft. Clinch and Old Town Fernandina we headed in to the marina counting it as another great day to be out on the water!
Posted by Anglers Mark at 9:09 PM No comments: 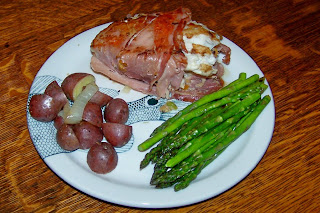 Saute the onions, celery, bell pepper and Konricko in a tablespoon of olive oil for a few minutes then brown the shrimp slightly. Mix with crabmeat and stuffing and add a little water to get the mixture to hold together. Lay two slices of prosciutto on a cutting board the one fillet crosswise. Spread stuffing mix over fillet then make a "sandwich" with the other fillet. Wrap the prosciutto over the fillets and pin with a toothpick. Use anther slice of prosciutto to cover if necessary. Heat the skillet you used to saute the vegi's and place wraps in the skillet, browning on both sides. I covered the skillet to make sure the fillet's cooked through.
Posted by Anglers Mark at 10:30 AM No comments:

First Day of Spring and....Fish ON! 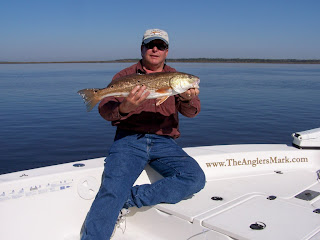 Carol and I launched The Anglers Mark at the Goffinsville boat ramp this morning just after sunup. It was still a cool 45 degrees with no clouds but the weather report called for a high in the low 70's. I noticed that the water had warmed to 57 degrees. What a beautiful day! We cruised down Nassau River with porpoises rolling on both sides, turned the corner at Seymore's Pointe, cut through Jackstaff, made a brief run up the Intercoastal and into a new creek that I have never fished before. More porpoises greeted us as we dropped the trolling motor to fish the oyster banks on the first of an incoming tide. We pitched our Sure Catch jigs tipped with live shrimp to the bank and had a few nibbles but no real bites. As we prepared to pull up the trolling motor we were treated to the sighting of four otters playing and rolling and cavorting across the creek. We watched them disappear up a runout then cranked the Big Johnson and ran back to Jackstaff. The tide was perfect as it creeped in and carried us up the creek. Again, we had a few nibbles but no takers so we pulled up and ran to the southern tip of Broward Island. Carol switched to a float rig with a live shrimp "hanglin" underneath and it wasn't long before she began to pickup bites that made her float disappear then she had one good one and had a fight on her hands...and it got off! Ouch! I had stayed with the jig/shrimp combo and had a couple of "bumps" then UMPH, a good bite, a good battle, and the fish won, getting off after a few runs. Darn it! We had another treat, this time the sighting of a pair of Bald Eagles; I thought they looked a little haggard and I realized that they may be new parents! 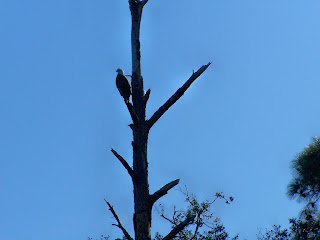 The sand gnats declared war and Carol retreated to a makeshift tent under my foul weather jacket,

but I "endeavored to persevere", switching to her vacated float rig and was soon rewarded with another strong bite and the fight was on! With me hollering "FISH ON" Carol came out of hibernation and grabbed the net, ready for the scoop. I had full confidence in the FINS Windtamer 15lb Olive braided line so I took my time working the fish to the boat where Carol scooped up what turned out to be a 26" fat Redfish! We continued to fish the log strewn bank with the float rigs and boated a few more Redfish, one being a keeper, and with our limit in the box and the gnats still swarming unmercifully, we pulled up and headed for the open water of Nassau Sound. The drum fishermen were out - I counted 12 boats at Black Hammock as we passed and when we got to the bridges I pulled up short, electing to fish on the west side. We could see through the pilings and estimated 25-30 boats on the ocean side fishing for whiting! We anchored in 25' of water off of Longpoint with only a few boats as neighbors and dropped our bottom rigs to the bottom with a small piece of peeled shrimp as bait. It wasn't long before we were catching whiting ourselves so we sat there and picnicked, listening to the radio, and catching some spring sunshine. We caught 23 whiting, all 12" and under, but had a awesome time, counting it as another great day to be out on the water!
Posted by Anglers Mark at 7:45 PM No comments: 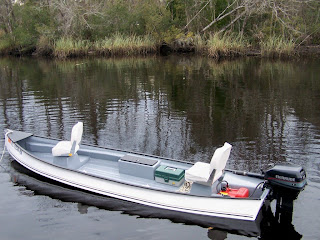 I wanted to thank you all for the entries in the "name the boat" contest - we had 64 entries.


The "committee" met tonight at Shuckers in O'neal and in addition to celebrating a buddy's birthday, we went through the names and made a selection. My personal favorites were Marsh Madness and Water Mark. Other names that made the cut were Miss off the Mark, Pied Piper, Jitter Bug, Fish Finder, S.S. Piper, Legal Limit Hooker, and Breaking Wind. The winner was Piper's Pleasure submitted by Bud Hill. I'll be ordering the lettering in the next day or so to finish out the boat. Congratulations, Bud!
Posted by Anglers Mark at 11:38 PM No comments:

Not Fishing and Not Art but....

I finished a stool for my grandaughter, Burgandy. Normally I find it difficult to get through a project that doesn't have a fish on it, but this one was fun to do! See more pictures HERE.
Posted by Anglers Mark at 7:49 AM No comments:

The Nassau Sport Fishing Association's 12th Annual Drum Tournament will be held from March 12th-April 18th. The big Black Drum are beginning to appear at the jetties and sounds just in time for the tournament. The neat thing about this tournament is that it's over a month long - if you can't fish one weekend, you can catch the next one. See their website for more information.
Posted by Anglers Mark at 3:10 PM No comments:

The 10th Annual Redfish Roundup sponsored by the Florida Times Union is right around the corner, slated for Saturday April 10th, 2010. Go to their website to get the sign up form and get it mailed in. This is a fun tournament for all the family, it's inexpensive, it's catch and release, and it benefits a good cause. Just think, you don't have to catch the biggest Redfish, just the one with the most spots!
Posted by Anglers Mark at 2:58 PM No comments: