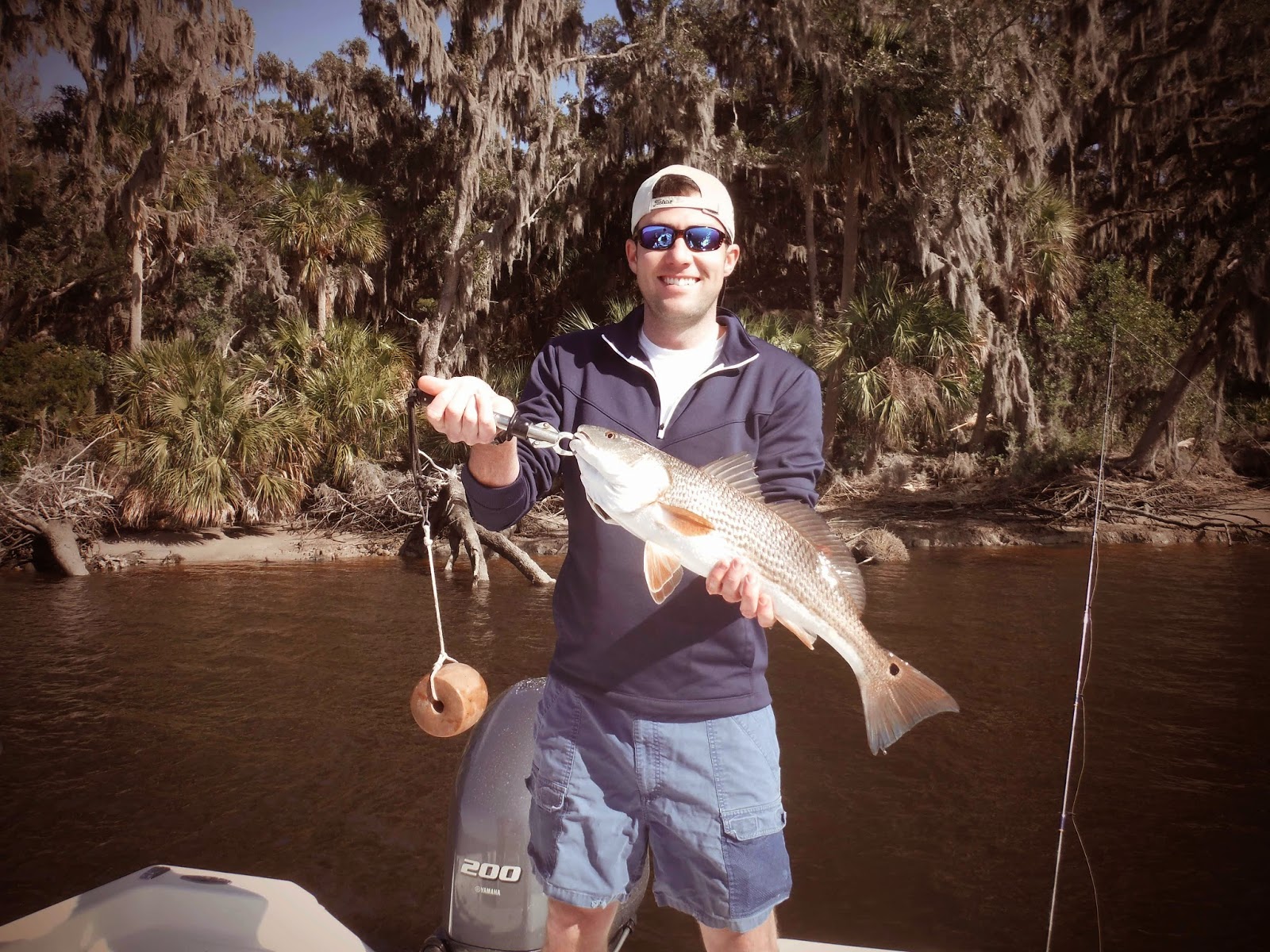 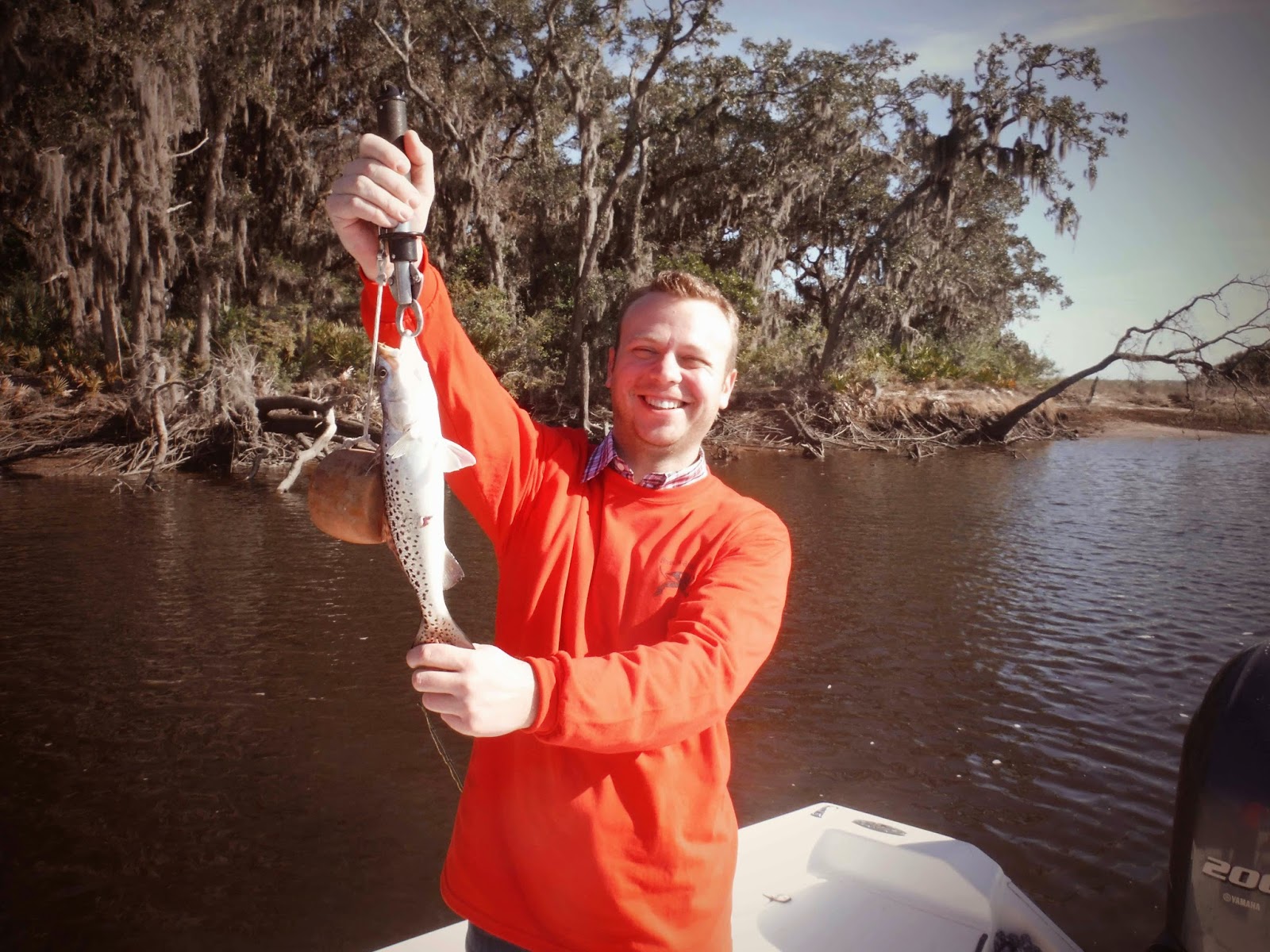 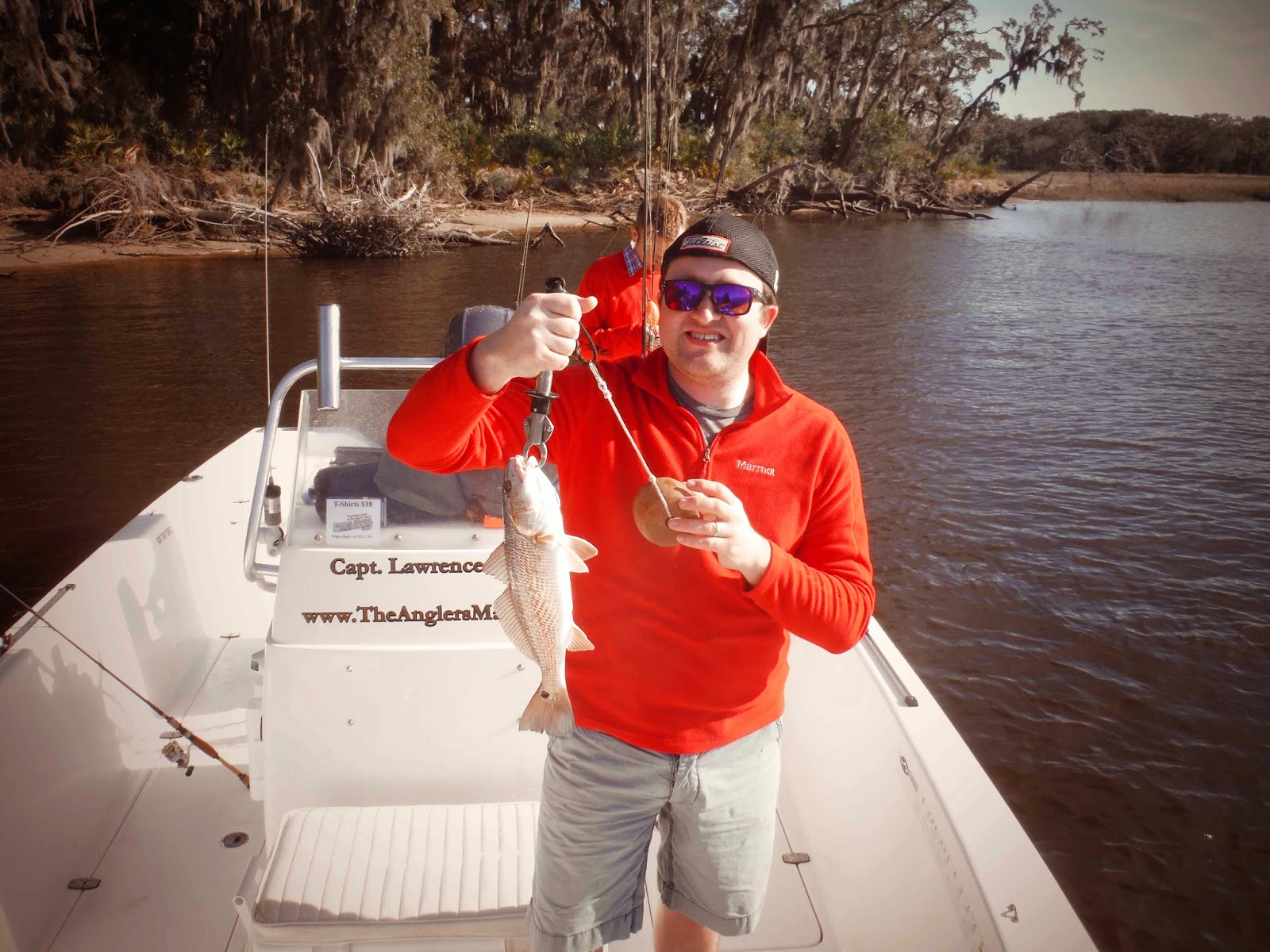 I fished again this afternoon, this time with Zach Feldkamp, who brought along his two friends Mark and John to fish the back waters of Amelia Island. The wind was still kicking out of the north east so we headed straight to Tiger Island and camped out there for a couple of hours. It took a little while but soon the anglers were catching fish. Mark started it off when he hooked up with a feisty Redfish. He added a couple of more then Zach put a Seatrout in the boat. John got the hang of it and put another Trout in the boat. The trio had to work at it but every once in a while they'd pick up a fish, fishing jigs and live shrimp slowly on the bottom. Then Mark had a strong hookup, FISH ON! This one wanted to pull some drag so we knew it was bigger. Mark played the fish patiently and after a good battle landed a nice Slot sized 24" Redfish! After picking up a few more Trout, we made a run around to Jolley River, fished some flooded oyster beds with float rigs, then continued on to the Bell
River to fish some docks. Here, Mark picked up another Redfish and Trout while John and Zach landed more Trout. The sun was going down and it was getting somewhat cool, so we called it a day, another great one to be fishing Amelia Island waters!
Posted by Anglers Mark at 9:24 PM No comments: 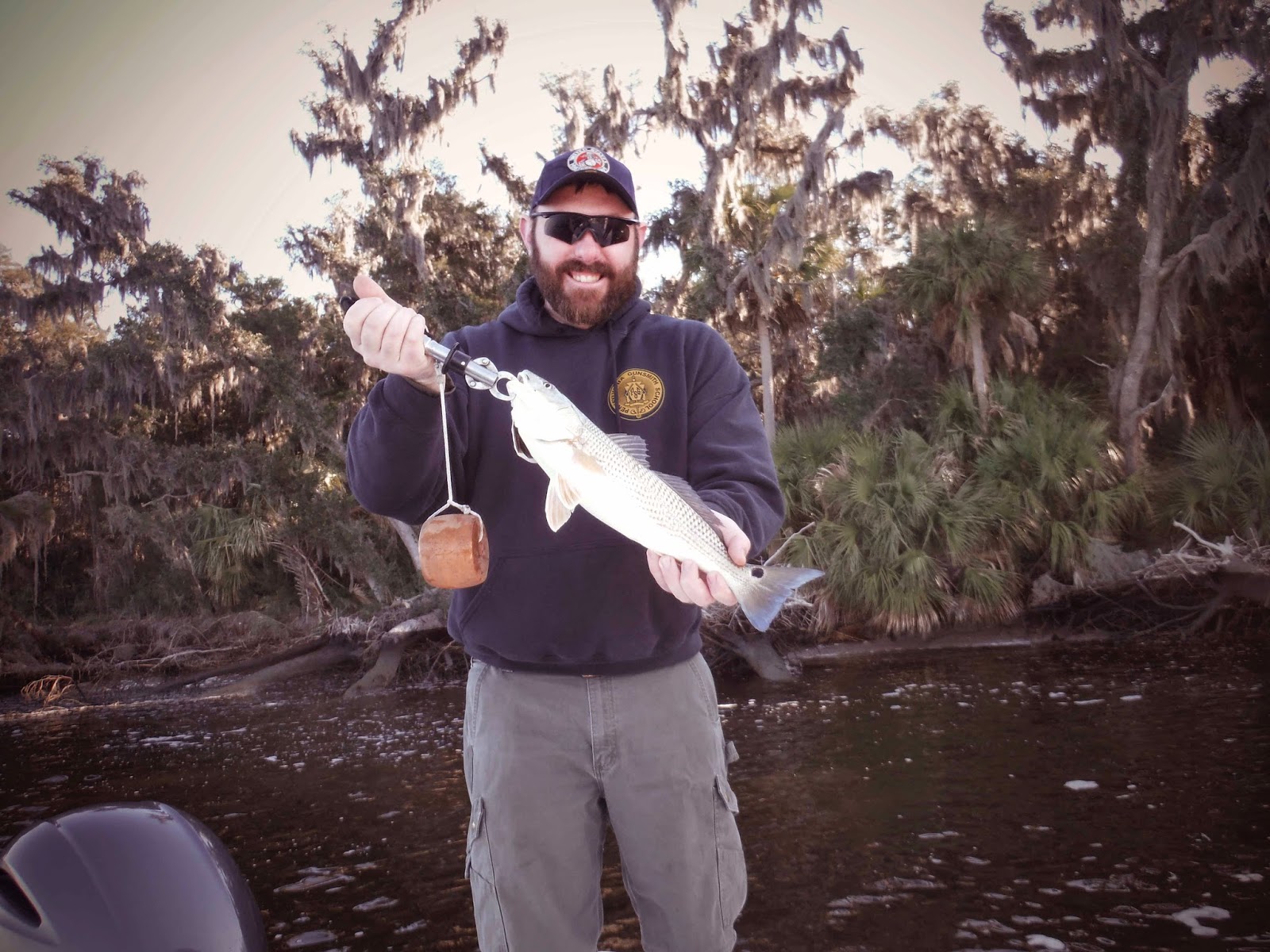 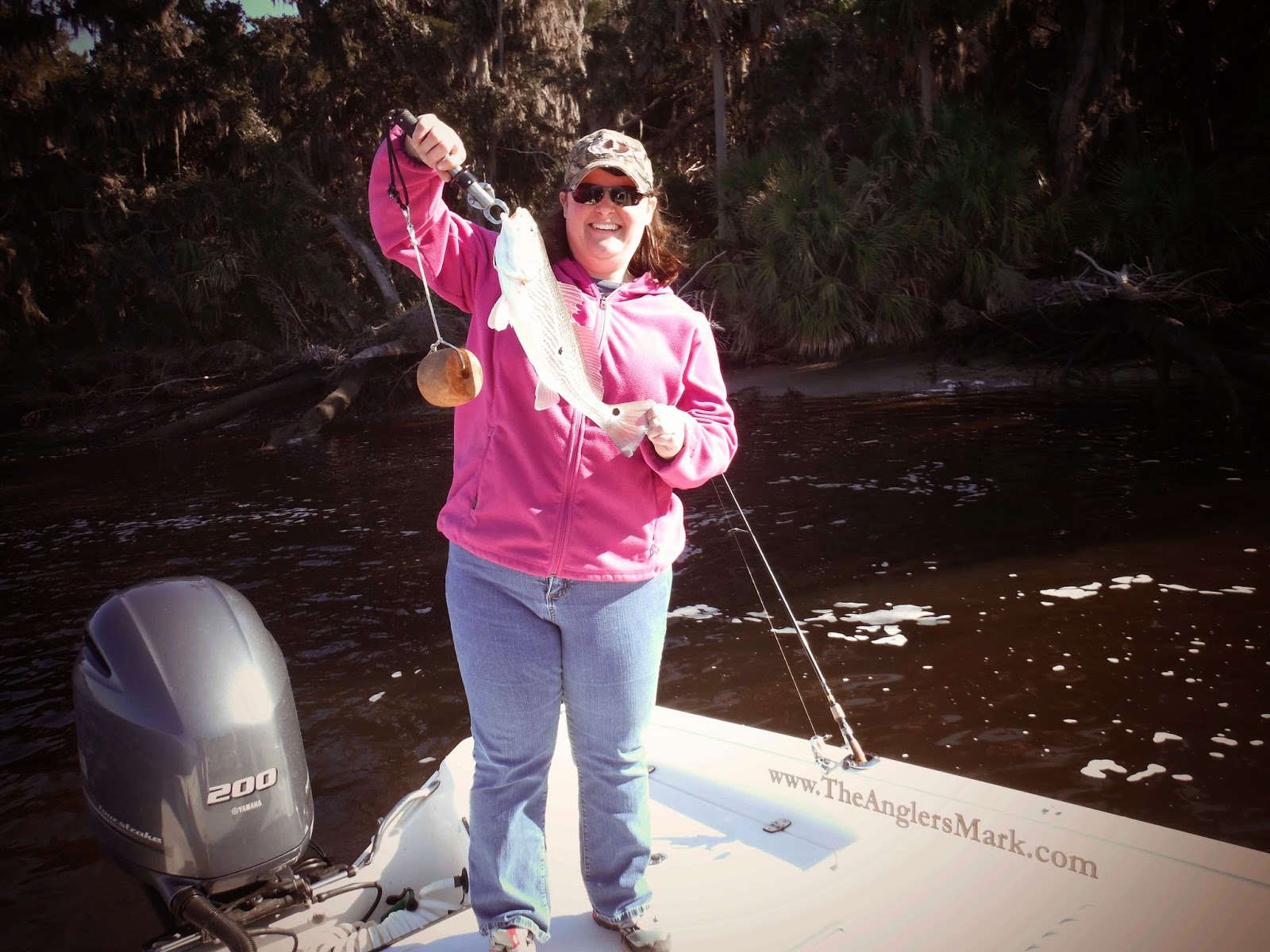 This morning was pretty cool and we had winds up to 12mph but this Florida weather was nothing to deter a couple from Vermont! I met Nathan and Christine Tuttle down at the City boat ramp early this morning and we ran up Lanceford Creek to fish some flooded marsh grass with float rigs and live shrimp, but the fish hadn't woken up yet! We fished some dock pilings at Oyster Bay, again with no real bites, then made a run around to fish Tiger Island as the tide dropped. This did the trip and soon Nathan had boated a nice
Redfish to get things rolling. He later added a Slot sized Red and picked up a Seatrout, too. Christine got in on the action and put a feisty Redfish in the boat then both anglers were catching fish. Nathan picked up a keeper sized Sheepshead and a little later landed an even larger one. We caught a handful of small Trout then surprisingly found a handsized Flounder to round out an Amelia Island Back Country "Grand Slam" of Redfish, Seatrout, Sheepshead and Flounder. The sun had come up and the wind was blocked so we had another great day of fishing here at Amelia Island!
Posted by Anglers Mark at 9:08 PM No comments: 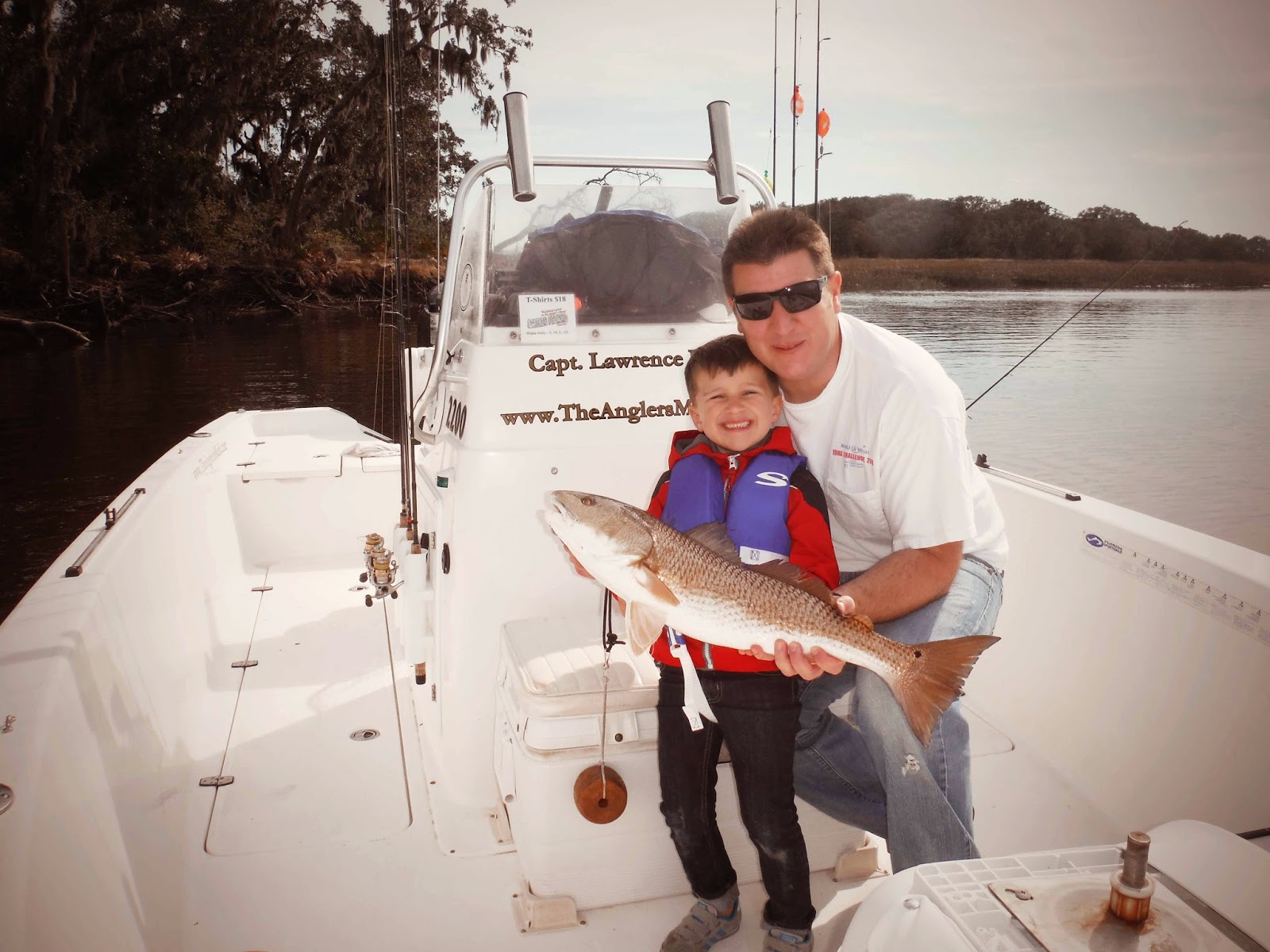 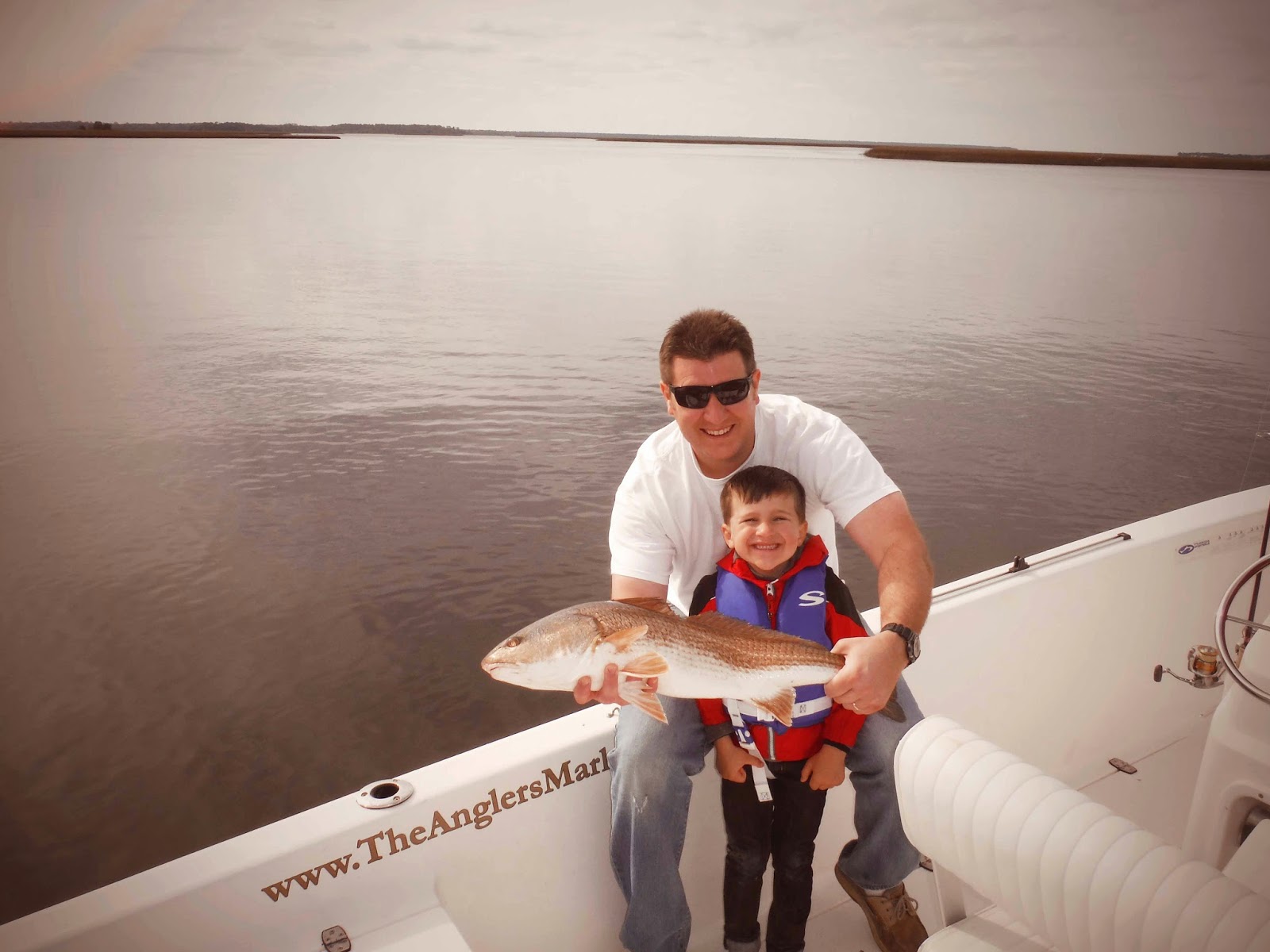 I fished this afternoon with Ryan Smith and his 4 year old son Owen. Although we'd had a cool morning, the sun was overhead and heating things up nicely. We made the short run to Tiger Island to fish an incoming tide with jigs and shrimp. The two anglers had only made a cast or two when Owen yelled that he had a fish, and he did! He worked the fish in and "knocked the skunk off" with the first fish of the day! Both Ryan and Owen caught feisty Redfish at
that first location then Ryan put a keeper sized Seatrout in the boat. We worked up and down the bank and then we found some Big fish! Owen had a strong bite and yelled FISH ON and  boy was it a fish! He and his dad fought the fish from stern to bow and back to stern and then the fish went deep, but the duo kept the pressure on. After a good battle  they landed a nice oversized 28" Redfish! We kept fishing, picked up some smaller feisty Redfish then the father/son team caught two Slot Redfish. Things slowed a bit, then BOOM! Another big fish on! Another monumental battle! But Ryan and Owen were up to the task, patiently playing the fish and eventually landed another oversized fish, this one measuring in at 29.5" and securing them top spot in the 2015 Anglers Mark Bragging Rights Tournament! (Scroll down right side of this report for standings). We enjoyed the beautiful day and wrapped it up when the two anglers landed a nice keeper sized Sheepshead. With that, we called it a day, another great one to be fishing Amelia Island waters!

Posted by Anglers Mark at 10:02 PM No comments: 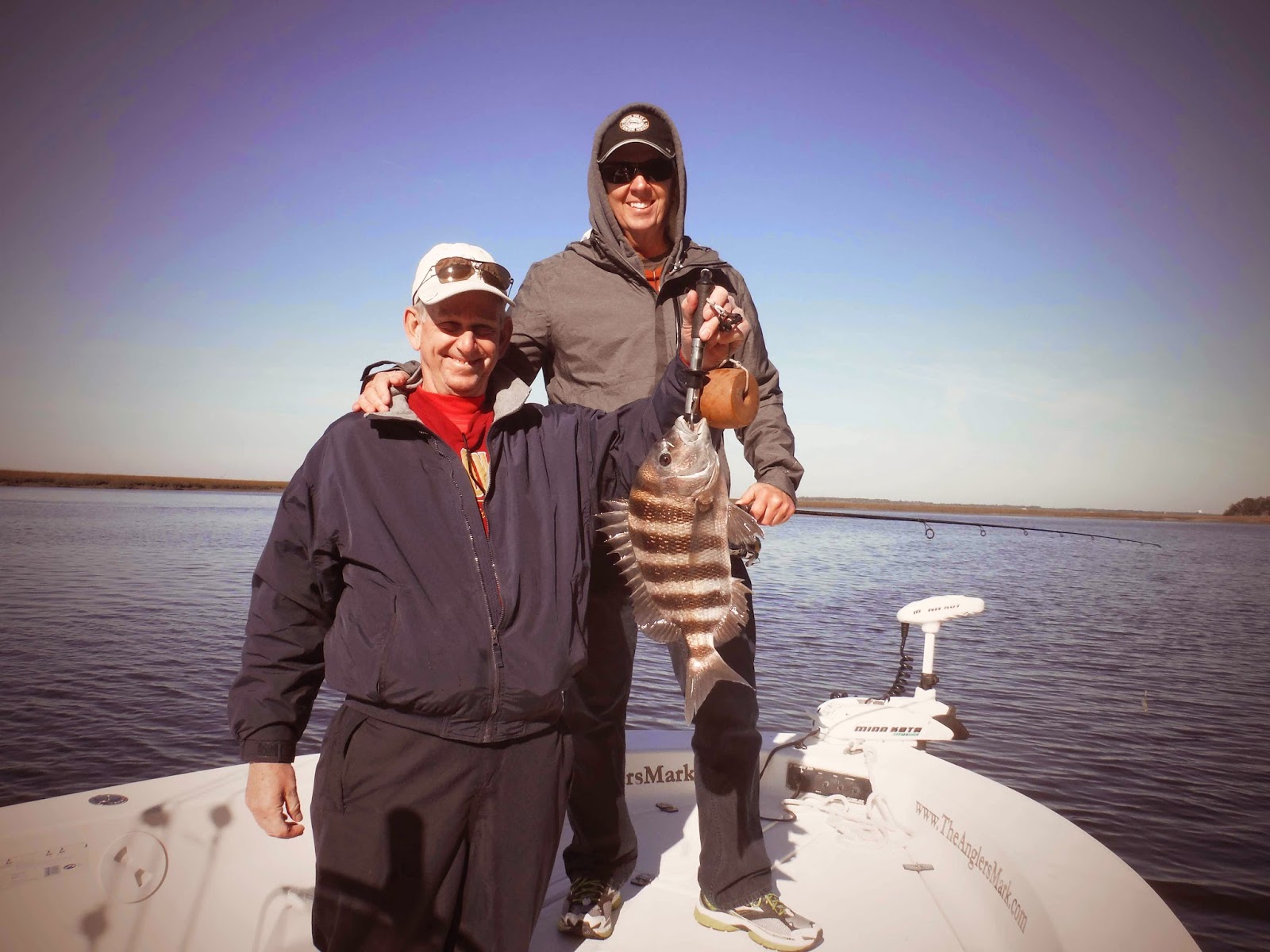 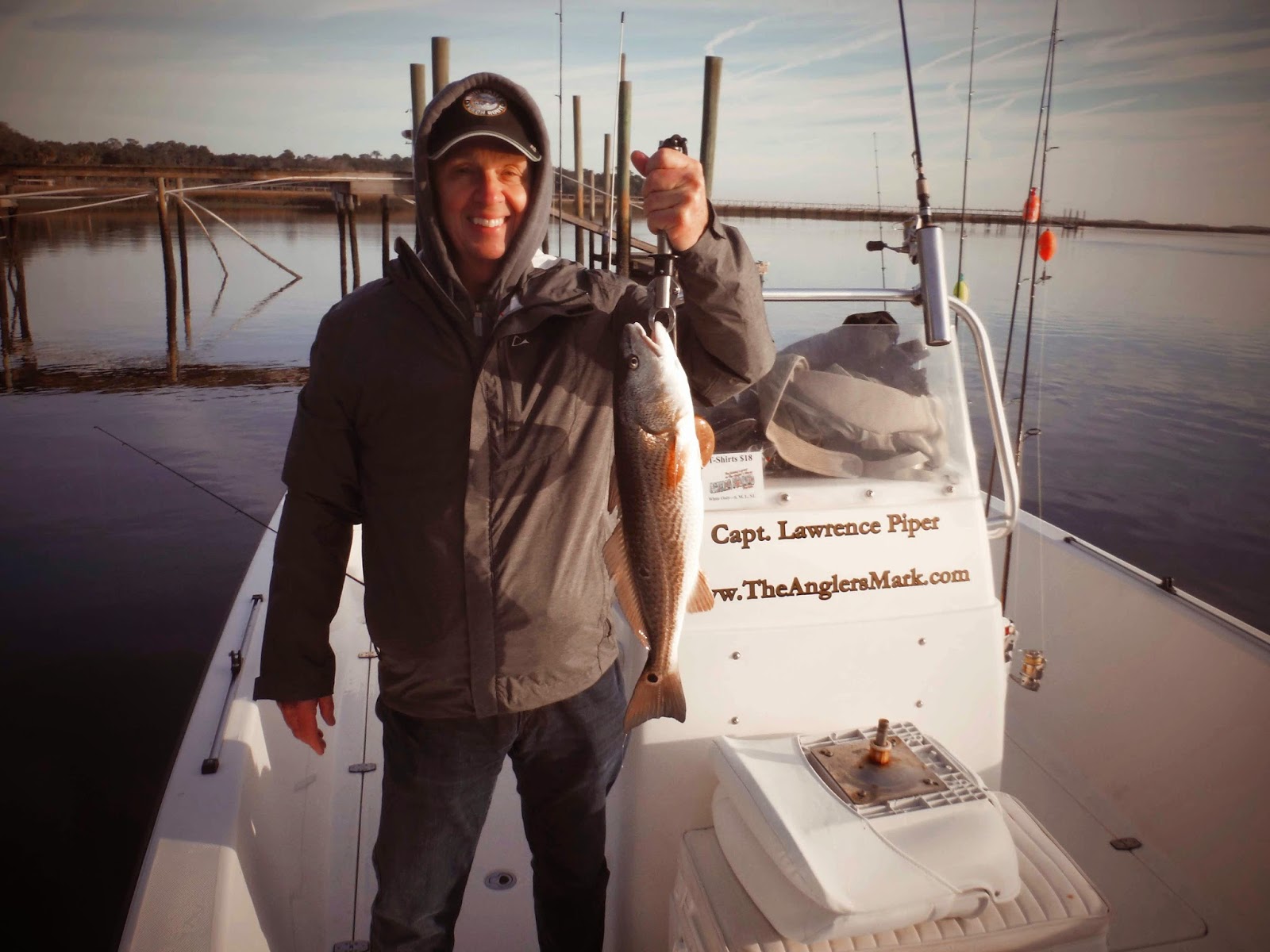 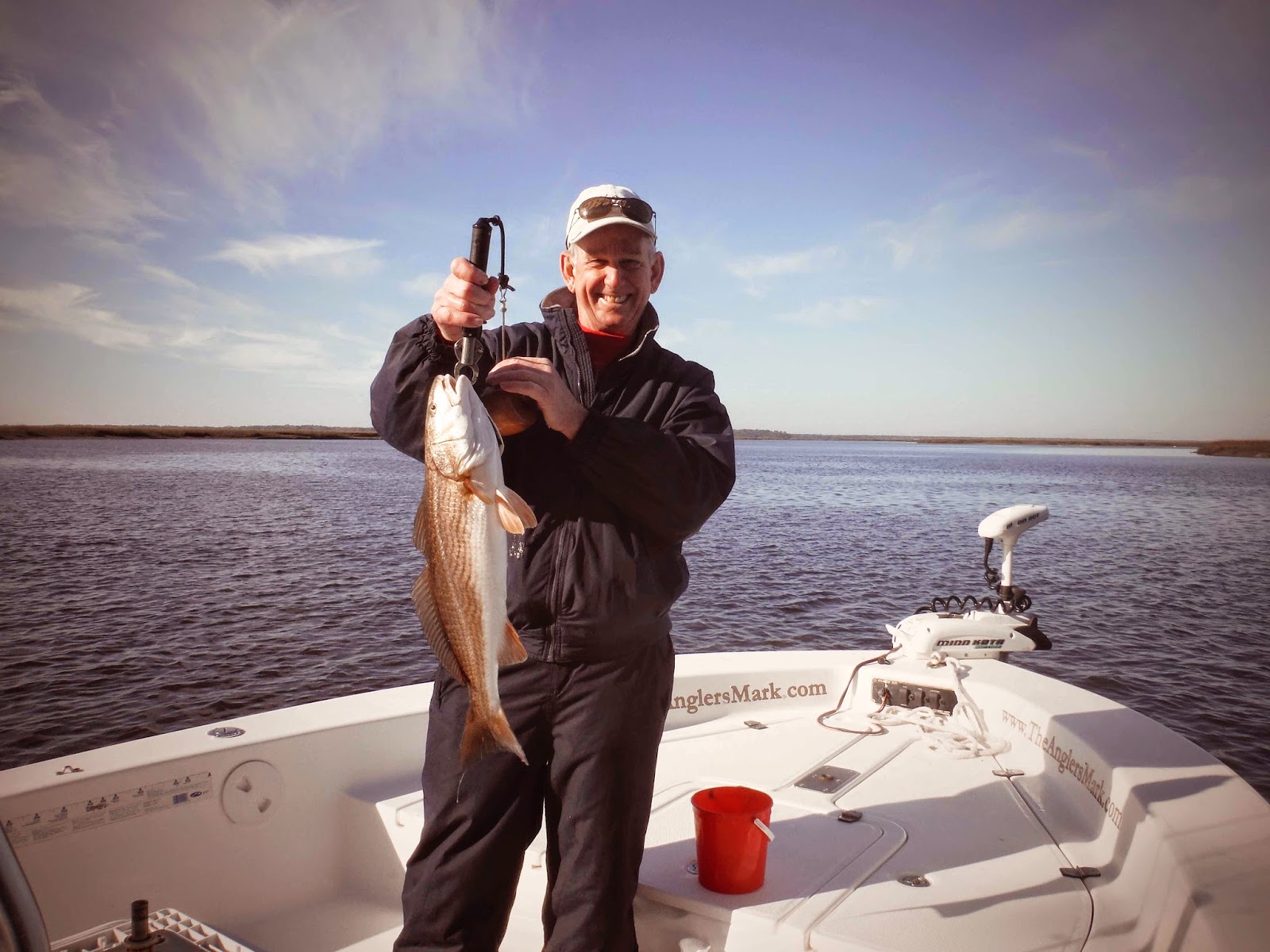 It was about 43 degrees this morning when I met brothers Dale and Evan Stewart, but there were clear skies and we were all bundled in layers. We headed over to Eagans Creek to fish an outgoing tide with jigs and shrimp and it wasn't long before Dale "knocked the skunk" off with a nice Redfish. He landed another and then a hungry Seatrout. I think Evan was just spotting him a few fish but then he started putting some keeper sized fish in the boat. First he landed a nice 17" Seatrout and then he put a 22.5" Red in the boat.
We fished the area for a good while, landing a handful of more Reds then we made a run around to Tiger Island. The fish were biting here too! Dale had a strong bite and his rod bent double, FISH ON!  He played the big fish patiently and after a good battle landed a nice 24" Slot Redfish, and this one had no spots! Although we weren't in the Spot Tournament, the fish placed Dale in the Anglers Mark Bragging Rights Tournament! He then followed that up with the biggest Sheepshead to date, an 18"er. Somewhere during the trip Evan spotted an Atlantic Saltmarsh Mink scurrying
along the bank.  We fished the area thoroughly, catching a few more feisty Reds and hungry Seatrout, then we headed in, counting it as another great day to be fishing here at Amelia Island!
Posted by Anglers Mark at 9:41 PM No comments:

Limiting Out In January 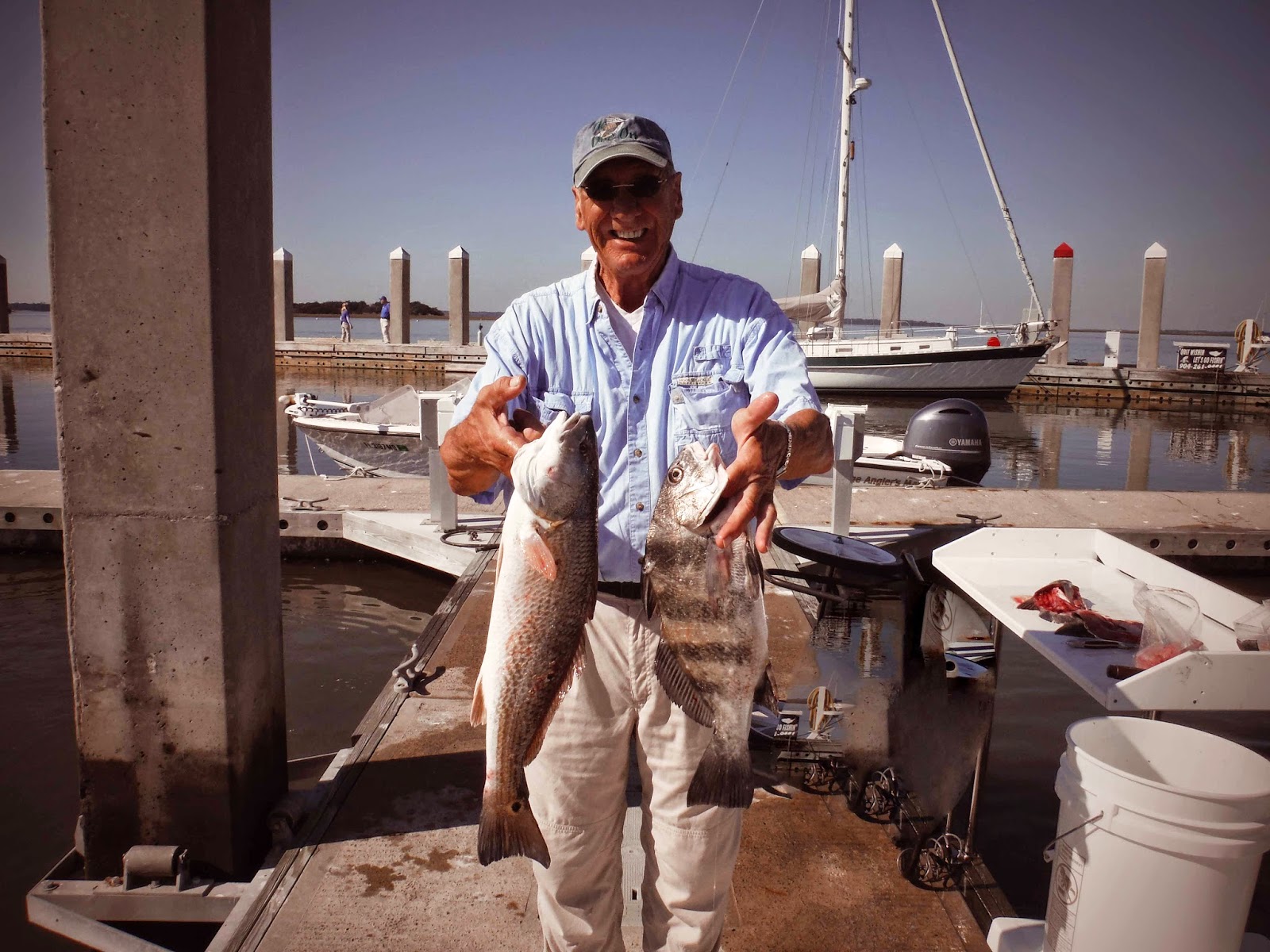 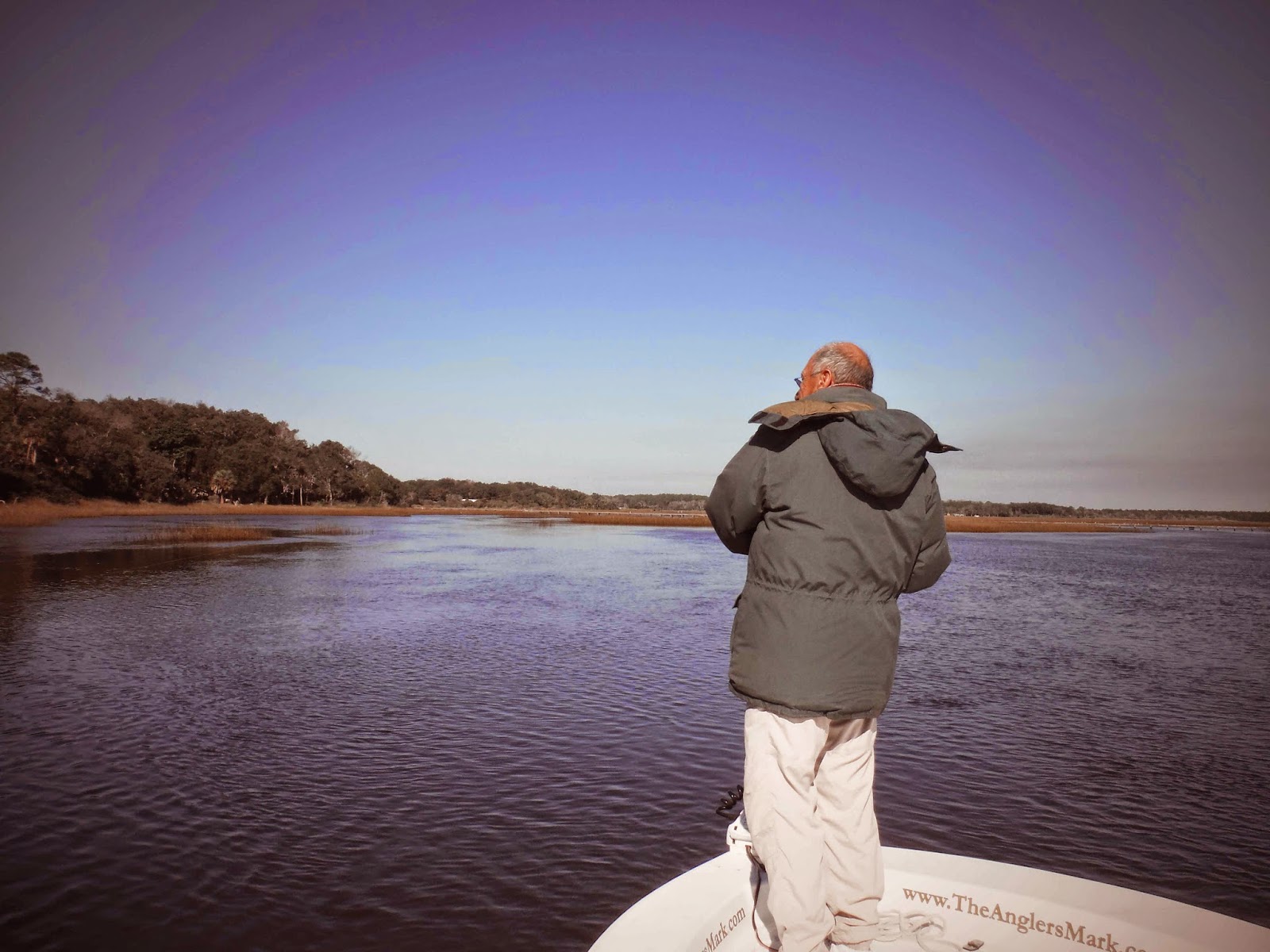 Yesterday was so beautiful and I was somewhat disappointed that I didn't have a fishing trip so when Di Dier De Bruyne called and wanted to get some fishing in this morning I was super ready! I met him down at the Atlantic Seafood dock at sunrise and we headed south to fish the Amelia Island back waters with live shrimp and jigs and float rigs. It took about20 minutes but then the fish began to bite on the last of an incoming tide. Di Dier was patiently fishing
the jig slow in about 10 foot of water when he had a strong hookup and after a good "head shaking battle", landed and nice keeper sized Seatrout. He then got into a mess of keeper sized Black "puppy" Drum and landed one after the other. Before the day was done he had his limit of five in the boat. We added another good handful of Trout with three more in the keeper range, and we also had 10-15 Redfish. One of those was a bruiser, measuring in at 25", a perfect Slot Red to give Di Dier an Amelia Island Back Counry slam of Seatrout, Drum and Redfish. We fished the area for about 3 hours, never having to move because the bite was so good, then made one stop on the way back to the marina. It was a nice sunny day and a great time to be out fishing Amelia Island waters!
Posted by Anglers Mark at 5:46 PM 1 comment: 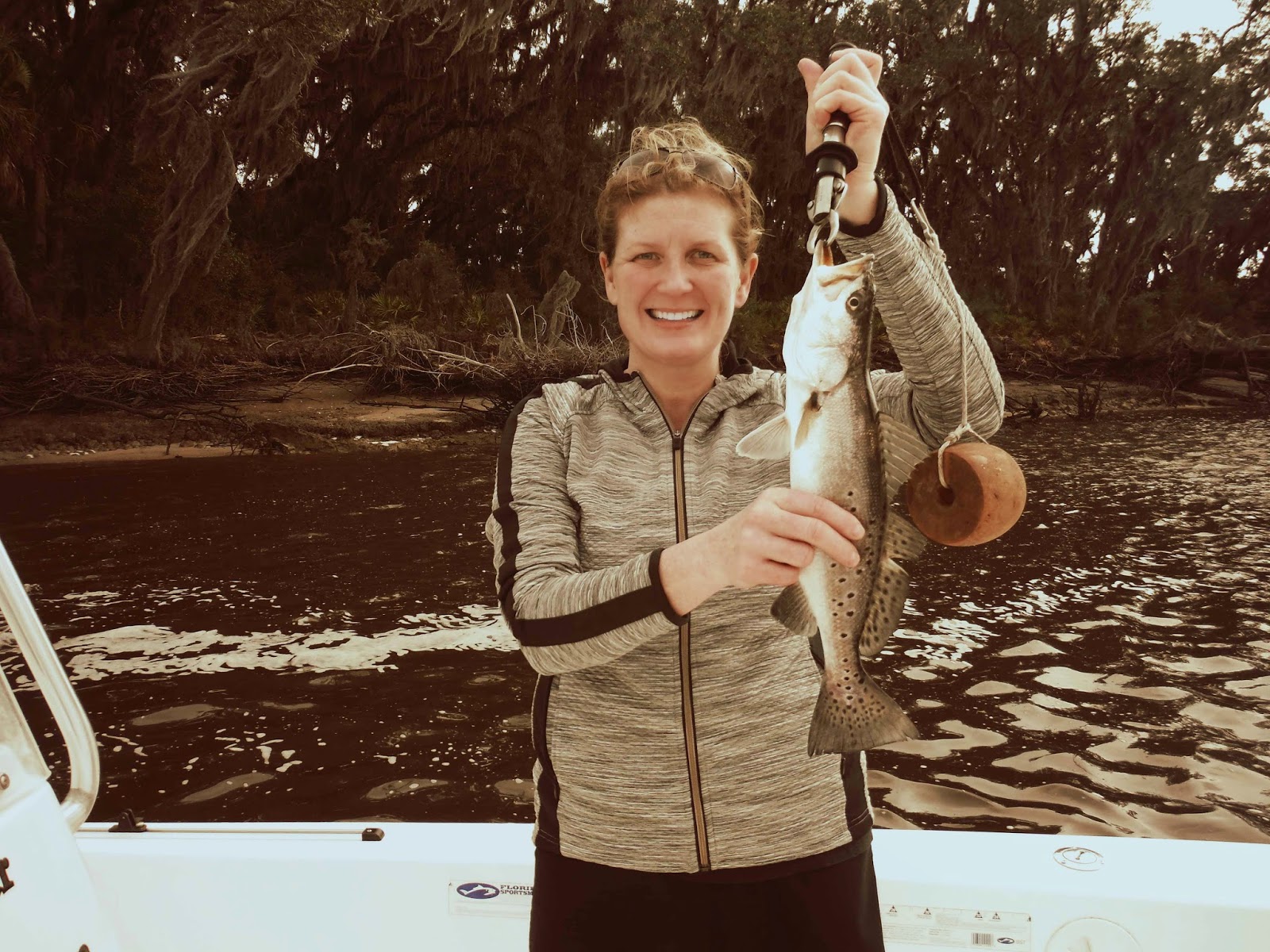 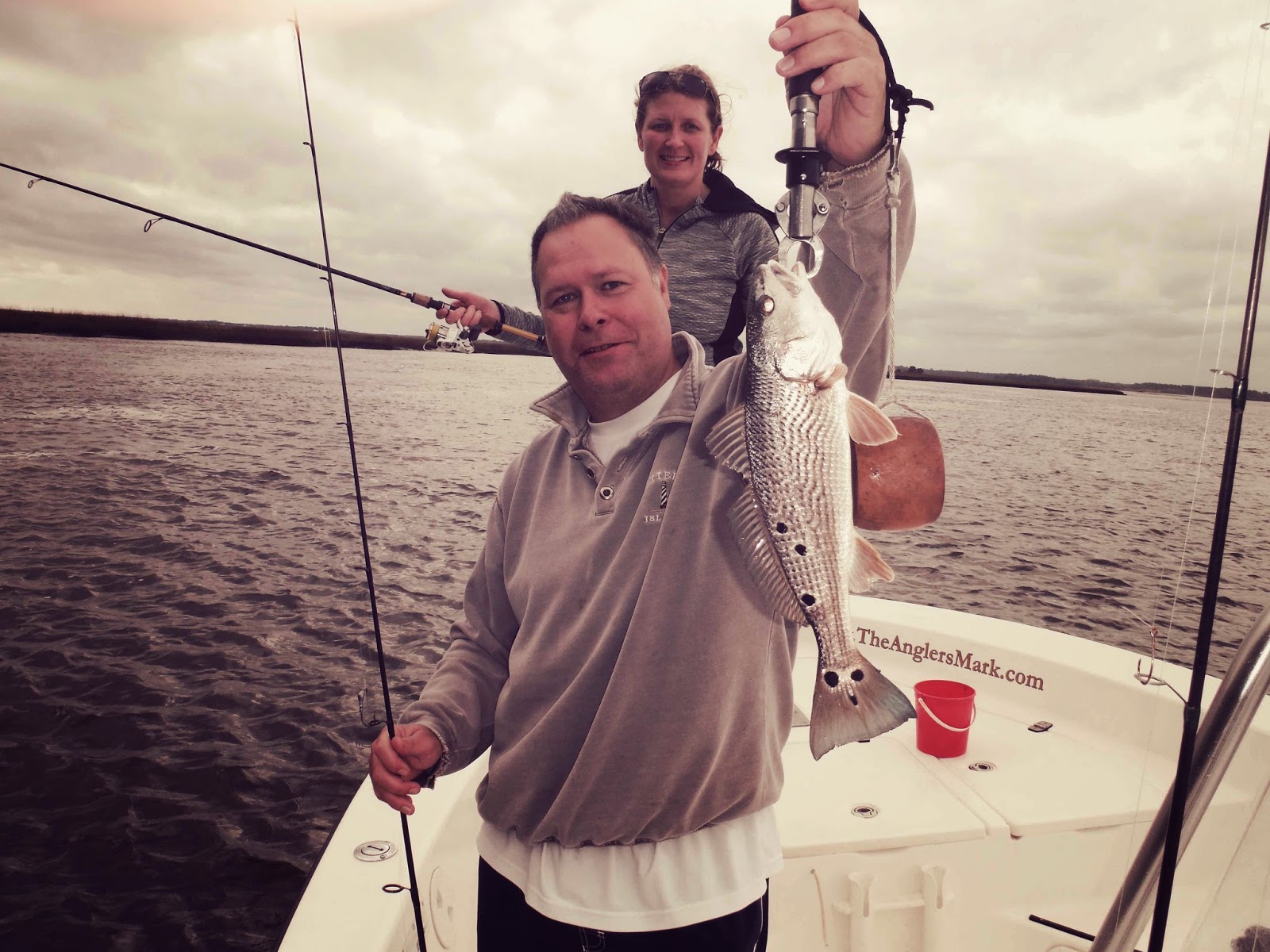 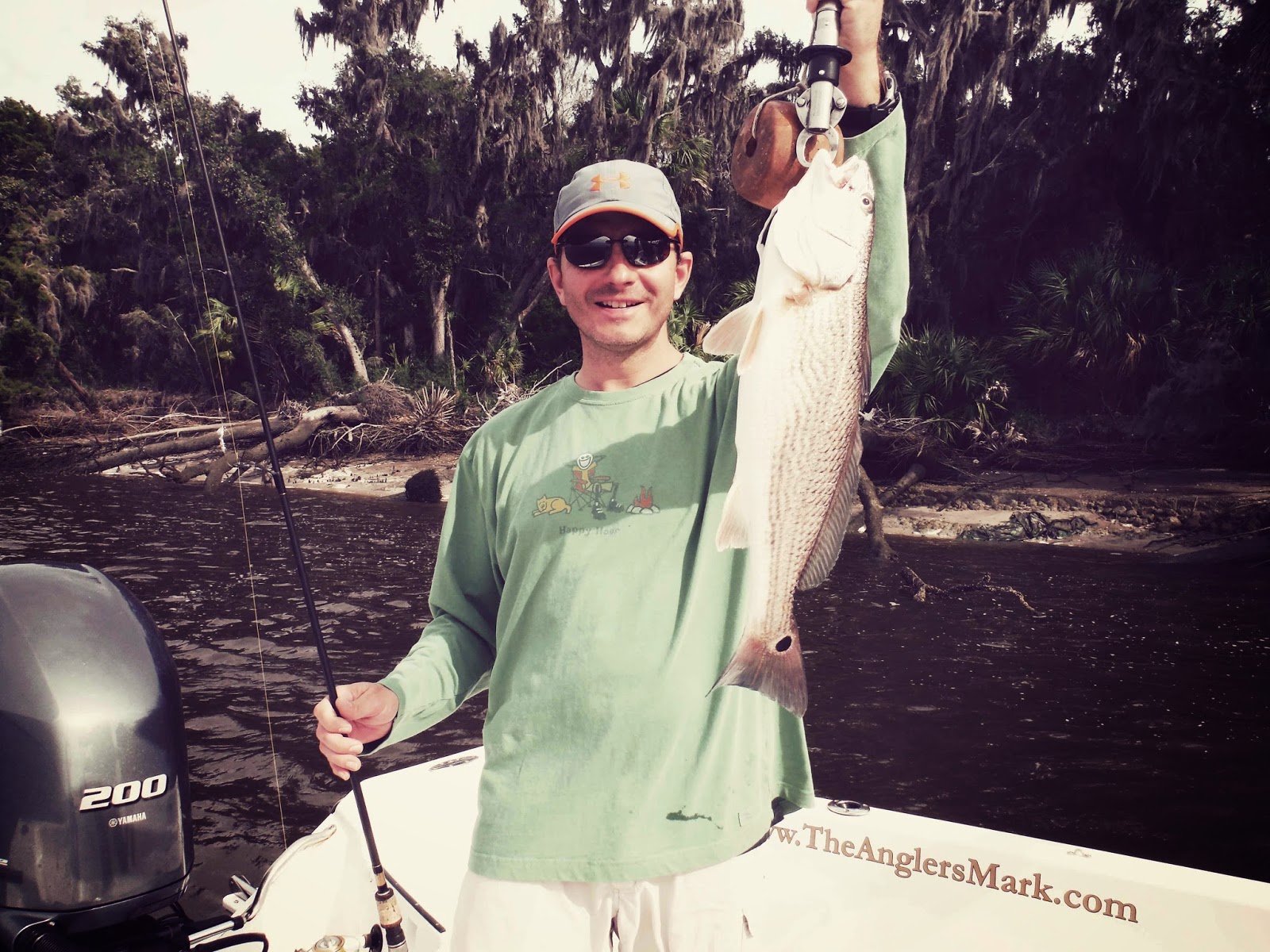 You could say that it was a beautiful day today, warm - shirtsleeve weather, partly cloudy. But the wind that was forecast for up to 12mph was all that, and more. I met Yale Miller, his wife Hillary and their friend Chris down at the City docks this morning,  holding off to 9am to fish the outgoing tide. We made a run up Lanceford Creek to fish "Millie's Spot" with float rigs and live shrimp, but had no takers. Our next stop was Oyster Bay docks and even though we immediately got bites, they turned out to be bait stealing Perch. The
wind was kicking so we cut through the back side of Bell River to Tiger Island and began fishing deep with jigs and shrimp. Just like yesterday, this did the trick. Yale knocked "the skunk off" when he hooked up deep with a keeper sized Seatrout. I think I was happier than he was to see a fish in the boat! Then all three anglers began to get bites.  Chris, dubbed the "Redfish Kid", found a Redfish hole and zeroed in on it, catching one each time he got his cast pin pointed.  Yale was on the bow and picked up Seatrout and a Redfish now and then.  Hilary was making good casts, stayed with it, and
caught a Redfish and then put the biggest Seatrout of the day into the boat. After Chris landed a Sheepshead to round out an Amelia Island Back Country Slam of Redfish, Seatrout and Sheepshead, he then found a bigger Red, fighting it to the boat patiently and we soon netted an nice 18 1/2" Slot Red. Hillary had a strong hookup, played the fish to the boat and just before we netted what appeared to be a huge 24" fish....it slung the hook and swam off to be caught another day! The anglers picked up a few more fish then we called it a day, another great one to be fishing Amelia Island waters!
Posted by Anglers Mark at 5:35 PM No comments:

18 Spots On a Redfish 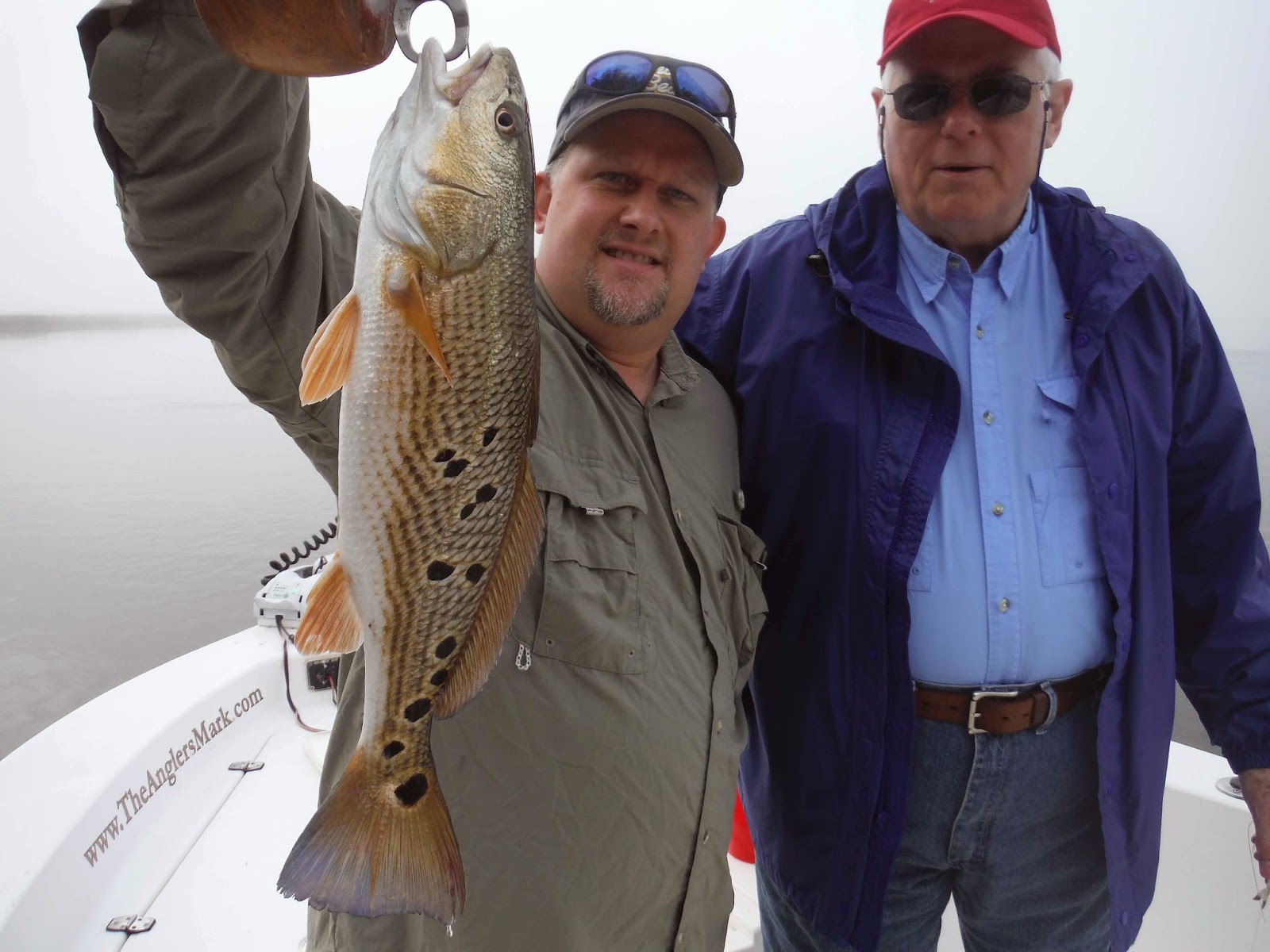 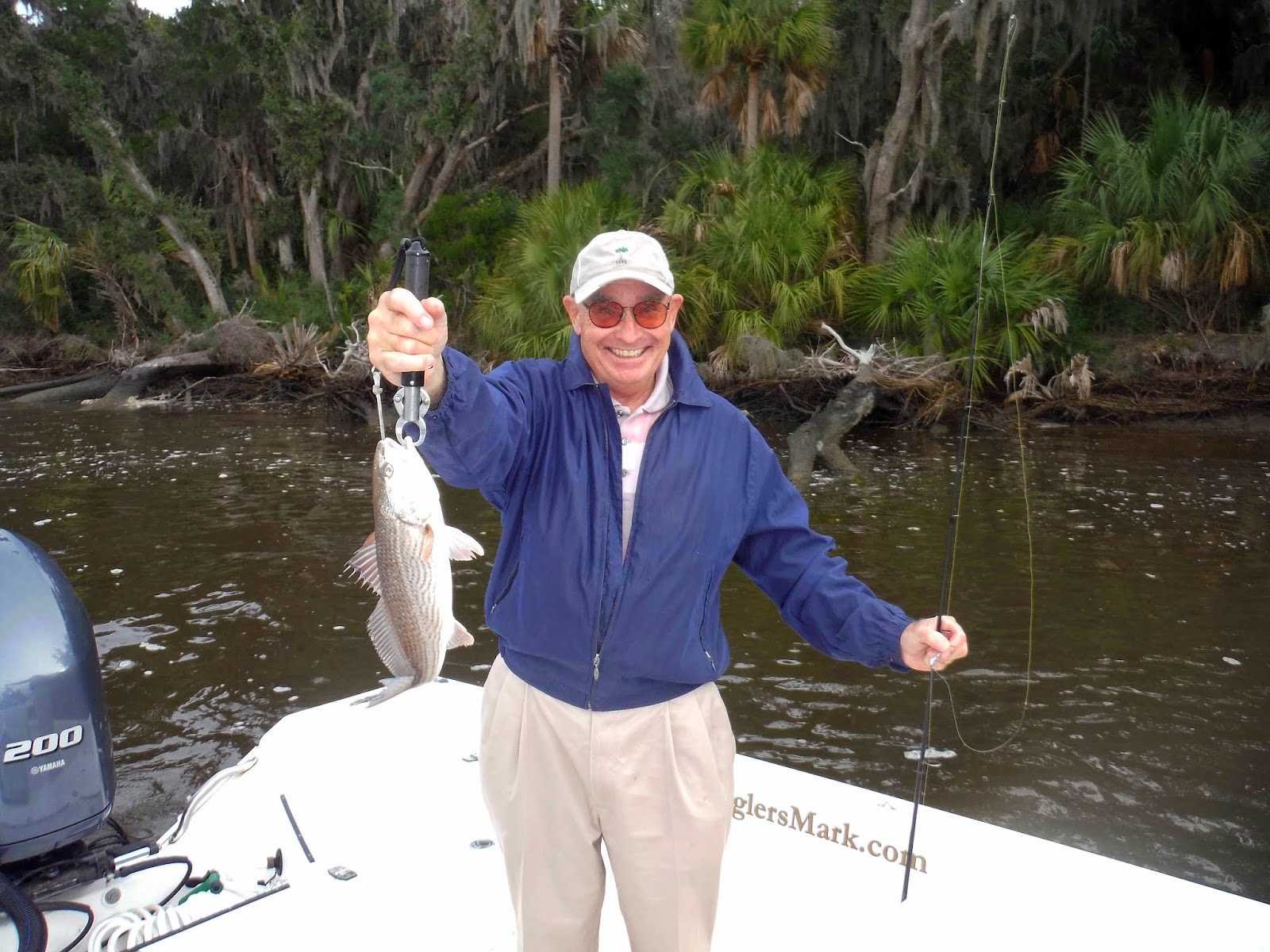 My first trip of 2015 was today with Doug Mackle, his son Doug, and their friend Stan. We met down at the Fernandina Beach Harbor Marina right at high tide and headed up Bell River with some live shrimp. The three anglers tossed float rigs to some flooded marsh grass but had no takers. We made a run to the outside of Tiger Island, again tossing float rigs, and again, had no takers. We decided to go deep and made a stop at Tiger Island and this did the
trick. Right off Doug Jr. had a good bite, a strong run, but the big fish headed for some downed limbs and broke itself off. But it wasn't long before both Doug and Stan had hooked up again and landed fish. Doug put a hungry Seatrout in the boat and Stan battled a feisty Redfish to the net. For a good hour or so the anglers got bites, catching Seatrout and Reds.  Doug Sr. got in on the action and put a keeper sized Trout in the boat then Stan put a keeper sized Redfish in the boat. We continued to fish the area. moving 40 yards or so, here and there, and Doug Jr. found a keeper sized Flounder to round out the trio's Amelia Island Back Country Slam of Redfish, Seatrout and Flounder. Doug Jr. had another hookup, another Redfish and this time we saw that he had put a 18 spot Redfish in the boat, a serious "money" fish if fishing in the Spot Tournament. When the bite slowed we made a run up to Jolley River to fish the exposed oysters and even though conditions were right, we had no real bites. But we had a great time in some great weather, another great day to be fishing Amelia Island waters!
Posted by Anglers Mark at 6:19 PM No comments: