Effective August 1, 2009, many Florida residents who were previously exempt from purchasing a saltwater fishing license will be required to purchase a saltwater fishing license before fishing from the shore or a pier, bridge or jetty attached to the shore, unless they are a member of a group* that is still exempted from the license requirements. Read more....
Posted by Anglers Mark at 5:04 PM No comments:

Boat fire kills dog, takes all
By Angela Daughtry, News-Leader
City and county firefighters battle a yacht fire at the city marina Monday night, above and below, before a crowd of onlookers. The boat was a total loss. Photos by Robert Fiege/News-Leader. Read more here...
Posted by Anglers Mark at 5:31 PM No comments: 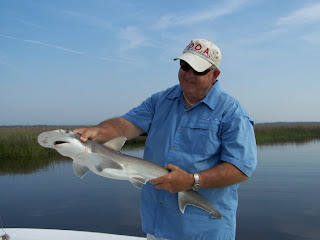 Capt. Ron Presley of Cocoa Beach, Florida was visiting Amelia Island with his wife so he and I were able to get out on the water this morning. We left the Atlantic Seafood dock at 7:30am and eased across the harbor to fish a long oyster bank at Lanceford Creek. It was a clear, beautiful morning with only a slight breeze. We had a few nibbles, but no hook ups so we cruised through the marsh to Tiger Island. Again, just a few nibbles, but no takers. We picked up and ran to Jolley River, fished the east bank, then on up to one of the creeks that branch off. It wasn't long before Ron's drag was singing with a large fish ripping line off. He fought it expertly to the boat, and into the net. We snapped pictures of the nice, Bonnet Head shark and then slid him back into the creek. We hooked up with a few more of these hard fighting fish then moved on. Although the next few stops didn't produce any real bites, it was good to get out with Ron and trade "Charter stories". Thanks Ron, see you on your next trip!.
Posted by Anglers Mark at 6:40 PM No comments:

Big Red and lot's of Spots 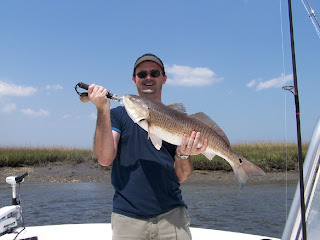 I fished Sunday afternoon with Jeff Fuchs who was visiting from West Palm Beach with his family and staying at the Ritz Carlton. We left the south end dock around 2pm and had the last of the outgoing tide to fish. Our first stop was at the mouth of Jackstaff Creek up at Horsehead and boy what a way to start! Jeff was an excellent caster and was pinpointing his Sure Catch jig and shrimp bait to the base of the oyters; we had only trolled the bank for about 50 yards when he hooked up to a big fish, fought it to the boat....and it broke off! OUCH! He hooked up with another briefly - it got off, then he hooked up again and fought this large 27", 6lb, 25-spot Redfish to the net (17 spots won the Redfish Spot Tournament in Jax last month). We were both huffing and puffing with excitement. I eased the boat up to the same spot and UMPFF! Fish on! Jeff boated a 18", 2lb Red. We again eased up to the "spot" and Jeff hooked up again, but this time he yelled, "It's bigger than the 1st". After a long battle, Jeff led the large 30", 9 1/2lb Redfish into the net. Like the others, we snapped some pictures and released this beautiful fish to fight another day. We eventually cast netted some finger mullet and picked up a nice Jack Crevalle, a small trout and then ended the day as the sun began to fall with a fat 19" Trout at Broward Island. What a great day of fishing!
Posted by Anglers Mark at 6:27 PM 1 comment: 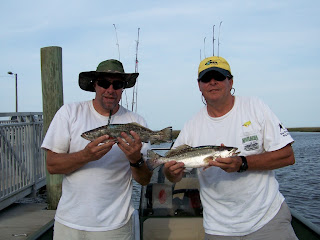 I fished yesterday afternoon with my buddy, Charlie Jones. He's been off all week and picked me up at the Holley Pointe boat ramp. It was dead low and as we rounded the first bend in Christopher Creek we could see pods of finger mullet along the bank. Charlie positioned the boat while I tossed the cast net and we eventually had 2-3 dozen finger mullet along with a couple of dollar sized crabs. We ran to Broward Island to get out of the wind (will it ever stop blowing?) and trolled up the north end, casting our fresh baits and Sure Catch Jigs up to the shoreline. I hooked up fairly quickly - the fish came to the top of the water, rolled and came off! When I got my bait in, it was intact, so I'm still trying to figure that one out. A little later we eached hooked up, bringing in some nice, fat trout. We caught some more and lost a few, but ended the day with some really good fishing.
Posted by Anglers Mark at 12:50 PM No comments: 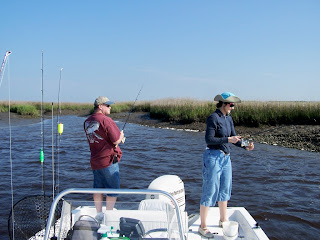 We had friends Bill and Denise Sweeney in from Maryland to take in the Shrimp Festival and decided to get out in the boat for a few hours on Friday. We launched from the north end boat ramp around 8am and had a baitwell full of live shrimp; the tide was low at 9am. Our first stop was on the east side of Jolley River, fishing the oyster beds with Sure Catch jigs and live shrimp. We had a few nibbles, but moved up the river to some of the creeks as the tide began to inch back in. The wind picked up so we ran to the docks on Bell Ri 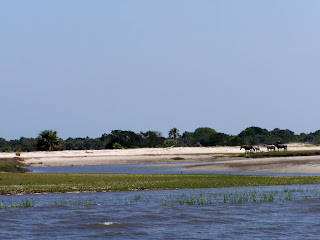 ver. Again, we had a few bites, some that wanted to take, but never hooked up. With the sun getting high and hot, we made a run by Tiger Island and over to Cumberland for some sightseeing and came upon a small herd of horses with a couple of new foals. Out by noon and on to some Seafood!
Posted by Anglers Mark at 12:42 PM 1 comment:

The Nassau County Commission passed an ordinance Monday creating a no-wake zone in the waters around the North End Boat Ramp. The zone, in which boaters will have to cruise at idle speed, will extend 500 feet north and 500 feet south of the boat ramp. However, some locals don't think it goes far enough, and the commission agreed to investigate extending the zone.
Read more....
Posted by Anglers Mark at 4:19 PM No comments: