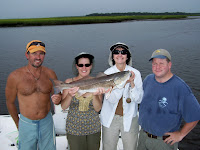 My fishing trips for novice or experienced anglers don't differ too much. After a brief safety orientation we'll head to the backwater, usually no more than a 10-15 minute run, sometimes even less. Normally I will pull up short of where we're going to fish and show you how we bait the hook or jig, and if you're a novice or a little rusty, give you a demonstration of casting then hand the rod over to you for some practice casts while I drop the trolling motor and ease up to the oyster beds or marsh grass. 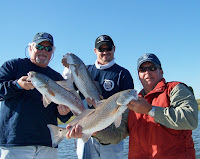 Sometimes, whether you’re a novice or experienced, it takes a few casts to get the feel of a strange rod. I remember once fishing with a guide down in the Keys,  I was on the bow of the boat while the guide poled through the shallows and when he spotted a fish he told me to cast. I "bombed", missing by a mile! My excuse, which I think is a valid one, was that I had never ever cast his rod and didn't have a feel for the balance, weight, etc. So don't worry! You'll get warmed up. I've noticed that all of my guests casting get better as they get used to the gear and the day progresses. 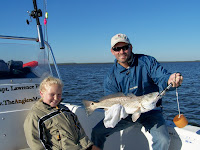 The anglers will be positioned with one up near the bow with me, one in the rear and one in the middle if there is a third. I put a small bucket of live shrimp in the back and one in the front so we don't have to continuously go to the bait well (If you're a "strictly artificial angler", let me know and we'll use Gulps and plastics during your trip).  During lower tides when the oysters are exposed, I'll ease the boat along the shoreline, trying to move as slow as possible while the anglers cast their jig and shrimp combo up to the oyster beds, let it go to the bottom, then retrieve it real slow. If you can't feel the bottom you're reeling to fast! You'll feel the bottom grabbing the bait, hang a little, pull it loose, then BOOMPH! Fish on! I'll keep the boat in position -"keep that rod tip up" - and as the fish gets near the boat I'll grab the net to scoop him up. I may ask for some help from the others with the net or to keep the trolling motor pointed in the right direction while we de-hook the fish, get it measured, and take pictures. It's up to you whether we keep a legal fish or release it to be caught another day 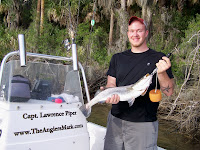 Depending on the time of year, we may throw some top water plugs, early in the morning or late in the afternoon. There's nothing better than to be fishing in the low light and twitching that plug through a calm water to see the explosive "BOOM" as a Trout or Redfish blasts your plug.  With higher tides we'll probably use a float rig tied to our line with about a 3' fluorocarbon leader under the float and a live shrimp hooked under the horn with our hook. These float rigs have some brass beads under the float that when twitched, make a clacking noise to attract fish. Again, we'll troll the marsh grass tossing these float rigs up near the grass, with oyster beds hidden under the water. Keep the slack out of those lines and an eye on the float because you never know when it's going to disappear and... FISH ON! Keep that rod tip up! If he's big and runs, let 'em run. The drag will slow him down. We're fishing with light tackle with 14lb leader material so let the drag and rod tip wear him out. Reel down, lift the rod tip, reel down, lift the rod tip and work that fish in to the boat. Whoop, there he's running again! Work 'em in, "somebody grab the net!"

If you have legal fish to take home when we get back to the dock I'll clean them for you, bag them in Ziplocks and add some ice.  That should get you back to your condo or hotel.  Bring a cooler if you're traveling.

Speaking of coolers, I have a large cooler on board with ice and waters.  Feel free to bring other beverages and snacks.  Best scenario is to bring them in bags and we'll transfer it to the cooler on board.

Although The Anglers Mark is a large, 22' Bay boat, there is no bathroom facility on board.  However, where ever we're fishing we're only about 10-15 minutes from the nearest boat ramp and restroom. Contact me now to set up your fishing trip!