Not as cold as in Minnasota 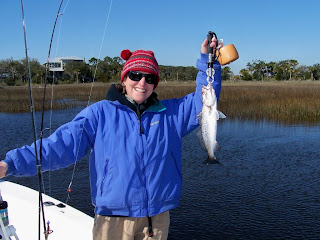 Local photographer Libby Wilkes hosted her son, George, his wife Barbara, and their daughter Mary Beth, all visiting this week from Minnesota. With temperatures warmer here than back home, they decided to take in some Amelia Island fishing. We left the North end boat ramp just as the rising tide peaked at 8:30am with a live well full of live shrimp and mud minnows. The wind was already blowing at about 8mph so we headed up Lanceford Creek in hopes that the wind would be blocked by the tree line, and it was. We tried anchoring and fishing the dock pilings and submerged oyster beds, then we trolled the docks, pitching a Sure Catch jig and live shrimp to the pilings. With no real bites, we moved back down the river to Oyster Bay's dock, eased back up in behind it and with the water draining from the marsh, soon began to get bites on our live shrimp under a float. Barbara had the hot rod with a number of bites and boated some nice Sea Trout. We fished behind Tiger Island, but with the West wind picking up, we were "challenged" from the start. Even thought the bite was slow we were treated to siting of dolphin, osprey, ibis and other shorebirds and as we headed back to the dock we counted it as another great day to be out on the water!
Posted by Anglers Mark at 6:18 PM