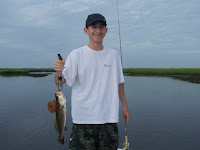 The weather forecast called for 60% chance of rain this morning but we chanced it anyway and I'm glad we did.  Although we had mostly overcast skies the fishing (and catching) was great.  I had met Steve and Debbie Kraman and their son Seth at the Atlantic Seafood dock this morning at 7am and we headed up to the Jolley River to fish a high and outgoing tide.  I had live shrimp for the first time in a month and half and we were getting bites right off.  We caught a handful of hungry Snapper 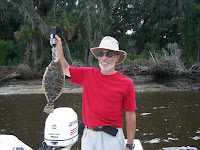 then Steve had a good hookup on a float rig. This fish put up a good fight but Steve was up to the challenge and eventually landed an nice 18" Redfish.  We moved up the river to a large creek runout and fairly quickly Seth landed a  keeper sized Seatrout.  The anglers added more Snapper then we headed over to the MOA (Mother of All) spots where they again landed Snapper.  We fished Jolley Bank where Debbie and Seth landed more Snapper and Steve put two Black "Puppy" Drum  in the boat.  Our last stop was at Tiger Island and after fishing  for just a little while Steve hooked up with a hard fighting fish.  He played the fish perfectly and after a good battle we landed a nice 17 3/4" Flounder!  This fish puts Steve tied for 3rd in The Anglers Mark 2013 Bragging Rights Tournament - Flounder category (scroll down right side of this report for standings).   All the anglers added Snapper to the fish count and Seth picked up a Flounder too, to round out his own personal Amelia Island Back Country Slam!  Counting Steve's Black Drum I'd call it a group "Grand Slam"!  With that, we called it a day, another great one to be out on Amelia Island waters!
Posted by Anglers Mark at 9:00 PM