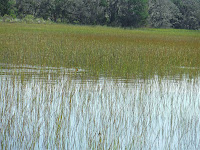 I fished with Jake Karamol today on a planned fly fishing for tailing Reds trip. We met at 8am up at the Dee Dee Bartels boat ramp and headed up to the Jolley River to do some blind casting while we waited for the tide to come in. Jake worked an exposed shell bank with a 8w outfit, tossing a shrimp fly pattern to the edge and letting it bounce naturally down the slope. We worked it thoroughly but had no strikes. 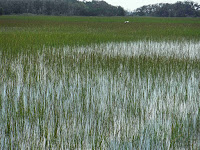 We hit another bank, did the same, switched flies, but had no luck. After running back to the Tiger Island area we checked out some grass flats but they just weren't high enough to have any fish. We blind cast some more around some now flooded grass then ran back into Tiger Basin to check out some more flats. Finally, the tide was up and Jake was the first to spot a Redfish tail . But it must have ate what it was after and the tail never showed again.

(ZOOM PICS! CAN YOU FIND THE TAILS?) 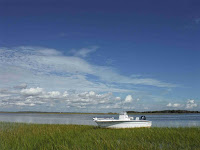 We moved to another expansive flat and sure enough, way off in the distance, there was another Redfish working the flat. Jake and I got out and waded towards it as it fed from right to left and as we got closer we saw another couple of tails pop up. We were in the thick of things! We waited patiently to see if they would come our way - the didn't - so we move on to try and head them off. These fish must have had sense about them because they fed just out of casting range. A couple of these fish were HUGE!

Finally, a darker tail was working towards us. He was coming right at us! As it got closer I guessed - Sheepshead - and turned out to be right! That fish fed right up to us  but wouldn't eat the Dupree Spoon Fly that I had tied of for the Redfish. He got closer and closer so all Jake could do was try and drop the spoon in front of it like we were using a cane pole in a pond for bream! It came closer and closer, right up to us - I could have dipped him if I had a net, then it moved on off. Crazy!

We continued to stalk, but the tide got up, then we didn't see tails but huge wakes. They moved here and there but never in range. It was an awesome morning ( we had a Bald Eagle fly by-see boat pic) and a great way to spend a day fly fishing out on Amelia Island waters.
Posted by Anglers Mark at 8:57 PM