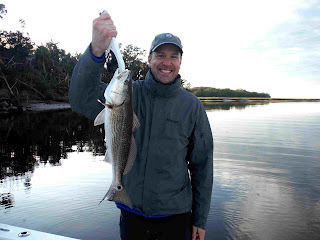 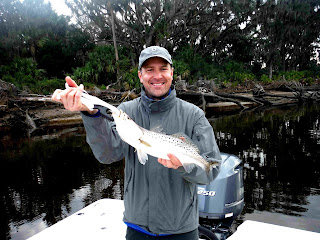 I hope everyone had a great holiday and 2020 is a great fish catching year for everyone. I kicked it off with a fishing trip with Ike Pohle, meeting him over at the Amelia Island Marina early this morning for a quick run up the intercoastal. We had clear skies, the sun was out, there was only a slight breeze and the temperature was just a tad bit cool. We made our first stop at the logs of Tiger Island and the tide had just started in. Ike was making excellent casts to the bank with a jig and live shrimp and it paid off -he started catching Redfish steadily.  The first few were just undersized but then he had one hit and rip the drag and he knew right off that it was a
bigger fish. Ike fought it expertly to the boat and landed a nice 21" Slot sized Redfish. All fish caught today were released.  We continued to fish and caught a good handful of Reds with a couple of them being of keeper size.

When that slowed we moved down the island, pitching between the logs and picked up a small Black "puppy" Drum then when Ike had another hookup he thought it was another small Redfish but when it came to the surface we saw that it was a nice 18" Seatrout!

Our next stop was up at the Jolley River fishing the oyster beds that were flooding. Although we gave it a good effort, the fish just weren't cooperating. We came back to the outside of Tiger, switched to float rigs with live shrimp, and did pick up a couple of Seatrout. The final stop was over in Bell River and Ike added another Trout and a barely legal Redfish to his catch. And with that, we called it a day, another great one to be fishing here at Amelia Island, Florida.
Posted by Anglers Mark at 6:55 PM