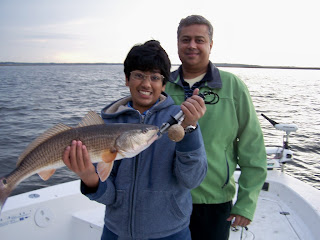 I picked up Vigay Raghavan and his son, Arun, at the Southend boat ramp Saturday afternoon. I don't know if the air tempature got up to the 70 predicted, but it never really felt like it. We had a fairly stiff west wind blowing as we ran up Nassau River to our first stop at Broward Island. The wind and outgoing current made keeping the boat in line and casting very difficult so we decided to leave and try our luck out of the wind at the docks around Seymour's Pointe. No bites. I cruised up Jackstaff to a likely spot with some deep water and oyster beds; no bites. With two hours into the trip and the tide stalling at dead low, we pulled up anchor and ran back to Broward Island. Luck would have it: the wind died down, the tempature seemed to rise, and the fish bite turned on. Arun boated a nice 17" redfish - his first, then a trout. His dad, Vigay, got in on the action and began to pick up trout, and then Arun boated a another 17" red. There were a couple of times when both anglers had trout on as they got the hang of using the jigs and shrimp. When Arun's pole bent and drag began to rip off I new that he had a nice fish on the line. Vigay hooked up during the battle and told me to forget about his trout so we turned our attention (and net) to Arun as he reeled in his biggest fish to date -a 25" Redfish. We snapped pictures and released the fish to be caught another day. Although the day started out slow, we ended up catch 18 fish and ending the day with a bang. As the sun set, the west breeze caused the river to appear almost like glass as we cruised back to the boat ramp. What a great day of fishing!
Posted by Anglers Mark at 11:52 AM