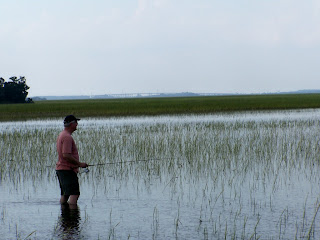 Mark Laurint from Jacksonville and I planned to do some "Tailin Red" stalking this morning so we got the day started bright and early - OK, maybe not so bright, but early! We launched from the North end as the sun was coming up and ran around to the Tiger Island entrance, threw some topwater plugs and picked up a couple of small trout. Then we eased the boat up to the flooded grass and fairly quickly saw a cruising Redfish, and boy he was booking it across a grass flat, with no time to stop and feed! We moved around behind Tiger Island and nos 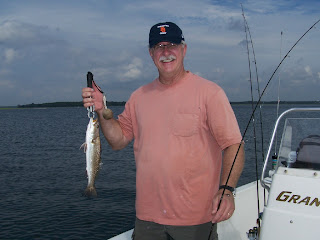 ed the bow of the boat on to a grass flat and began to see tails pop up. Mark and I both eased over the side of the boat and waded out to make our casts; Mark made some good casts, putting his weedless jig right in front of a large feeding Red: it rolled and boiled on the bait but didn't bite. I chased a couple but never really had a shot at one. We returned to the boat, moved up the river and tried a few more spots, eventually trolling up a small creek through the marsh and to a lake-like flat with visible Redfish wakes cruising through it. I switched to a topwater plug to get some distance and seeing a wake, cast the plug and another "roll and boil" - but no bite. We made one more stop as the tide was going out and found another Red and some Sheepshead tailing, but no bites. We had brought a few dozen live shrimp with us and with a run up to Jolley River and a few casts with a float rig, Mark picked up a nice fat Trout. He then had something take his live shrimp and rip line off his reel heading up-river. Mark fought the fish beautifully but the fish must have got over in in the hidden oyster beds and cut himself off. We caught a few more trout before heading in for the day, another great day out on the water!
Posted by Anglers Mark at 5:26 PM