Catch'n in the River and Off the Dock! 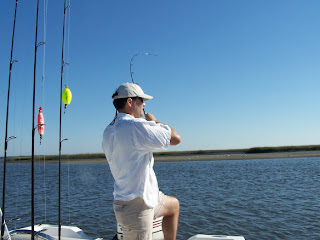 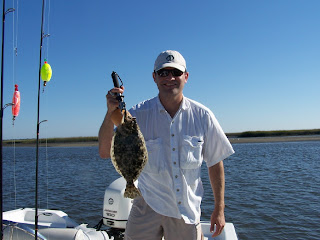 Will Steih was in town, visiting from Nashville with his wife to celebrate their 10th anniversary. While his wife was enjoying spa treatment at the Ritz, Will and I went to the backcountry to take in some Amelia Island fishing!  We left the south end Sawpit boat ramp at 2pm and headed up the Nassau River with the tide still going out.  Our first stop was at the Spanish Drop area;  the oysters were showing so Will began to toss a jig and shrimp combo to their base and it wasn't long before he was hooking up with feisty Trout with a couple of Redfish thrown in.  He was nailing so many Trout that I began to call him "Trout King"!  After hitting a few of the points at Spanish Drop we headed on around to the mouth of Jackstaff where Will continued his "trouting" ways,  hauling in a few more and then he boated a nice 17"er.  We fished a finger of a sandbar and Will hooked up, this time proclaiming that the tug felt different, and sure enough, he expertly landed a 17" Flounder, completing his Amelia Island Inshore Slam!  We tried a few more spots, but the bite had slowed so we headed in, counting it as another great day to be out on the water.  I walked up to the parking lot to get the truck and as I was backing down I could see Will hauling in another Flounder!  As I backed the boat in he hooked up with a Redfish and landed two more flounder while I loaded the boat.  What a way to end the day!
Posted by Anglers Mark at 6:58 PM