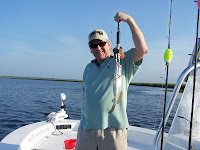 Amelia Island resident Kimberly Syme had pre-arranged a gift certificate for her husband Brian's birthday yesterday morning and he brought along his son Nicholas and their friend Mason Baker.  Boy was it a pretty day!  With the tide falling and the oysters already showing, we headed straight to the Jolley River to fish the MOA (Mother of All) spots and it wasn't long before these anglers were hooking up.  Mason got it started off early and picked up a hungry Seatrout then the Birthday Guy hooked 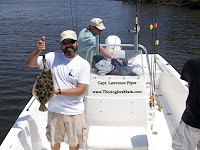 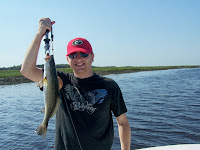 up with few that fell in the "keeper" sized range!  Nicholas warmed up his rod and landed a feisty Jack Crevalle.   Then Mason's rod bent over and his drag ripped out on a long run, FISH ON!  This hookup grew into an extended battle with the big fish bulling desperately to the bottom but the very light rod/reel combo held it's on as Mason patiently wore the fish out.  It took me two tries but we finally got the  3 1/2" Bonnethead Shark netted and in the boat for pictures - what a battle!  We moved back down the Jolley,  had few bites then moved further down to Jolley Bank where we worked the oysters thoroughly.  Brian
proved adept at finding the Seatrout but Nicholas had been making some good casts and now it paid off because he was targeting the waters edge where we had seen some movement and had a strong hookup.  This fish put up a good fight and ripped some drag before we landed a nice 19"+ Seatrout for the box!  Both Brian and Mason had hookups with Seatrout, Jacks and Ladyfish - the Poor Man's Tarpon and Nicholas added a keeper sized Flounder.  We made  our last stop at the Tiger Logs and on his last cast Mason patiently worked his jig down along side a log and HOOKUP!  This fish wanted to hug the bottom and turned out to be a really nice 17 3/4" Flounder which placed him tied for first in The Anglers Mark 2013 Bragging Rights Tournament - Flounder category (scroll down right side of this report for standings.)  With that we called it a day, another great one to be out on Amelia Island waters!
Posted by Anglers Mark at 12:38 PM