Making The Most of Lousy Weather 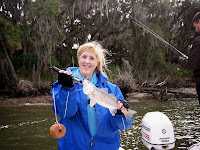 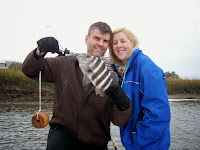 There was a window of opportunity to get out on the water this morning before the rain came through and Dori and Aaron Stibolt were game to get out and give it a try.  We left the marina at 8am with cloudy skies and wind at 10mph and headed north to fish behind one of the only available land masses.  The wind was somewhat blocked and the anglers picked up a few feisty Redfish.  We made a run around to Lanceford Creek and fished a protected creek and here the fish catching picked up as the tide reached it's bottom and began to come back in.  Both Dori and Aaron had good hookups with Redfish.  Dori was fishing a jig and shrimp while Aaron worked a Cajun Thunder float rig.  Aaron was able to add a nice keeper sized Sheepshead to the catch before we called it  day.  As we headed in the rain began to fall but we still counted it as another great day to be out on Amelia Island waters!
Posted by Anglers Mark at 7:25 PM