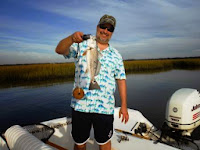 Steve Pautler was visiting Amelia Island for a conference and squeezed in an Amelia Island back country fishing trip this afternoon before getting down to business.  I met him down at the Big Talbot Island Park boat ramp and we headed up the Amelia River to fish a creek off of Jackstaff with float rigs and live shrimp on the very first of an outgoing tide. We had a a few small bites but no takers so we dropped back to Jackstaff "bank" and began to ease
along the marsh grass.  It wasn't long before Steve began to get bites, hookups and landings. He had a good variety of  hungry Seatrout, hard fighting Bluefish and feisty Redfish. One of the Redfish had eight spots which surely would have placed and won money in the local Redfish Spot Tournament. Later, one bite was really strong and when it bent his rod over and the drag began to rip, we knew it was a big fish, FISH ON!  Steve played the big fish patiently as it ran to deeper water then back again. After a long battle Steve landed a 3'+ Bonnethead Shark, which we released after photographs. We continued on up the bank and when we switched to jigs and fished a larger marsh run out, Steve landed a nice Flounder to round out his Amelia Island Back Country Slam of Seatrout, Redfish, and Flounder.  We made a run around to Nassau River to fish Twin Creeks and in just a short time Steve landed a couple of more Redfish.  One of these had NO spots, which is a $500 prize in the previously mentioned Spot Tournament!  After getting a couple more Trout here, we made a final run down to Broward Island as the sun was setting.  We found a handful of Redfish here, a Trout or two, and then Steve wrapped up the day with one more Redfish as the sun set on another great day of fishing at Amelia Island!
Posted by Anglers Mark at 11:33 PM