Big Stingray and a Grande Slam 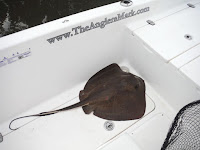 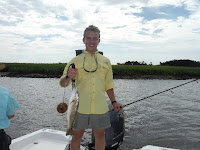 We had outstanding weather this morning, luckily with some overcast skies that kept things cool throughout most of the trip. I had met William Vickers and his son Jeff down at the City marina and we headed up to fish Tiger Island as the tide started in. Both anglers were making excellent casts and it paid off when Jeff hooked up and landed a nice Flounder. Then he had a strong hookup that ran deep and stayed deep! But Jeff was up to the game and played the big fish perfectly. After that first Flounder we were
all thinking "Door Matt Flounder" but after a good battle Jeff brought to the surface a big Stingray. But it was good fun landing the creature and the anglers kept on fishing. William put a feisty  Black "puppy" Drum in the boat and although we had some good bites later, we decided to run further north to the Jolley river and fish the "bank". William picked up a Seatrout to garner the duo an Amelia Island Back Country Slam of  Flounder, Black Drum and Seatrout then Jeff topped it off when he caught  nice Redfish, making it a "Grande" Slam. Jeff put a small Bonnethead Shark in the boat then we hit a couple of more spots before calling it a day, another great one to be fishing here at Amelia Island, Florida.
Posted by Anglers Mark at 9:22 PM