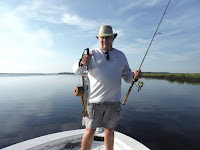 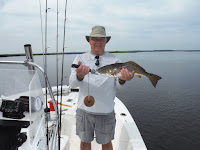 We've had tons of rain here at Amelia Island and it finally let up over the weekend. And after being gone on vacation for about 10 days I was ready to get back in the saddle and catch some fish! I met Chris Triponey down at the Atlantic Seafood dock early this morning and we headed north to fish the Jolley River on the last of an outgoing tide. I think Chris had two hookups the first two casts!  The first was a fast bronze colored keeper sized Seatrout (all fish were released today) and a fairly large and hungry Croaker. We
fished the oyster lined bank and picked up a couple of more Trout and a couple of more Croaker. We moved further up the river, fished a large creek run out and here Chris put a feisty Redfish in the boat. Moving on he got into a hot spot and landed a couple of more Trout, one being about 17" and extremely fat with roe. We hit the MOA, picked up a couple of fish, then ran back to Tiger Island to fish the logs as the tide started back in. Chris caught a hungry Flounder to round out his Amelia Island Back Country Slam of Seatrout, Red Drum, and Flounder, then he picked up another feisty Redfish. Later, we had a strong hookup and this one was pulling drag! Chris played the big fish patiently and perfectly and soon landed a nice 22" Slot Redfish! We fished he area for a short while longer then headed in, counting it as another great day to be fishing here at Amelia Island, Florida.