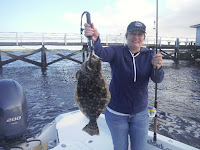 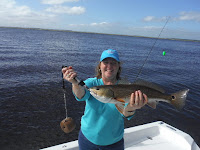 I had a "ladies day out" today, fishing with Teresa Gaslin and her friend Kim Bates, meeting them down at the Sawpit Creek boat ramp on a blustery day. It was a tossup whether to fish because of the win, but fish we did! Our first stop was over at the Long Pointe docks and after fishing a good stretch Teresa had a "thump" then her line went heavy. When she tightened her line and set the hook she was into a fish fight and after a nice battle, landed a keeper sized Flounder to "knock the skunk" off the boat! After fishing a 2nd dock we made
the run up Nassau River and found a dock to fish. I think it was the first cast and we had a hookup. Kim played the fish patiently and soon landed a nice 17" keeper sized Seatrout. She went back to the same spot a few times more and when she thought she had snagged on the bottom, she stayed in "fish catching mode" and BOOM! IT WAS FISH ON! She played the fish like a pro and when it came to the top then made a mad dash to the bottom, Kim kept the pressure on and eventually landed a 21.5" Doormat Flounder which put here squarely in first place in the Anglers Mark 2015 Bragging Rights Tournament (flounder category-scroll down right side of this Report for standings). Boy what a fish! After hitting a second dock we moved around to fish Seymore's Pointe (and out of the wind). Kim put a feisty Redfish in the boat to round out an Amelia Island Back Country Slam then shortly after that Teresa had a strong hookup, and again, FISH ON! She played the fish perfectly and after a good battle and a couple of deep runs, Teresa landed a nice 21" Slot sized Redfish, another good fish! Our last stop was over in Jackstaff and although the tide was right for Seatrout, the wind was really buffeting us, so we called it a day, another great one to be fishing Amelia Island waters.
Posted by Anglers Mark at 1:49 PM