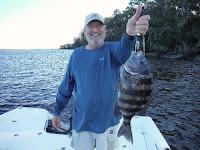 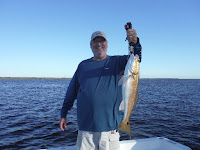 Over the last ten years of my guiding "career" I've had guests bring me stuff - cigars, T-shirts, beverages and snacks. Fishing with Dale Bullard I'm almost guaranteed a good old homemade ham sandwich - glazed ham, a slice of cheese and old fashioned white bread - and I make the claim that it's the best ham sandwich ever! Today was true to form, and when Dale said he'd brought some extra ham sandwiches I thought  about them all morning long. We met down at the Big Talbot Island Park boat ramp and with clear skies, headed
west and up the Nassau River. The weather forecast predicted that we'd have beautiful sunny skies for the day but it was also predicted to have winds of 9 mph to start with and rising to 20mph by noon, winds that can make fishing somewhat of a pain. Our first stop was at Broward Island and we found the conditions perfect with the last of an outgoing tide and only a slight wind. Dale began casting a jig and live shrimp combo to the shoreline and his first shrimp produced a nice 18"+ Slot Red! He was nibbled off on the second shrimp, but the third produced another 18" Redfish. That's the way to start a fishing trip! We fished the area up and down with Dale boating a feisty Redfish now and then and he also picked up a good handful of small but hungry Seatrout. After catching a small Black "puppy" Drum, Dale tossed to the outside of some tree limbs, let the bait fall, and BOOM, fish on!  He played the fish patiently and after a good battle landed a nice 19" toothy Sheepshead. And shortly after that he had another strong hookup. This fish was Big and made a surge to the downed logs but Dale kept the pressure on while I pulled us out to deeper water. This fish took him from bow to stern and from port to starboard and once it was in the outgoing current all Dale could do was keep the pressure on lightly.  This he did and after a good battle he landed a big 24" Slot Redfish. We fished the area thoroughly, catching another couple of Redfish and a Seatrout then we ran back to the Seymore's Pointe area. After fishing one dock where we picked up a feisty Red and a small Mangrove Snapper, we hit one last spot. Dale fished it with a jig at first and caught another couple of the Snapper and one small Grouper, then we switched to a float rig in order to fish the structure and it was Mangrover Snapper catching from then on until we needed to head back in. Two of the Snapper were a tad bit over 14" each. Although the winds had picked we found a way to stay out of it and turned out to be a great day to be fishing Amelia Island waters, and I had a great lunch of homemade ham sandwiches afterwards!
Posted by Anglers Mark at 6:09 PM