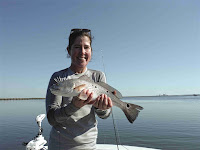 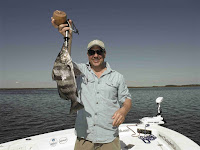 Who would have thought we'd be fishing in shirtsleeves in February here at Amelia Island? It was a beautiful morning when I met Charlie Bailey and Marge down up at the Dee Dee Bartels boat ramp. The tide was right at dead low so we ran up to Jolley River to fish the "bank" with jigs and live shrimp. Although the conditions were right with a first of an incoming tide, we had now real bites. We came back to Tiger Island and fished the deep water. Finally, Marge "knocked the skunk" off when she hooked up and landed a nice Slot sized Redfish. A while later we had another good bite and
Charlie put a feisty Red in the boat. We ran around to Eagans Creek and fished some dock pilings and here things heated up a bit. Actually, Marge's first cast produced another Slot Red!  And maybe the second cast! Then both anglers were getting bites. Charlie put a Slot sized fish in the boat then Marge followed it up with one that had the most spots for the day, an 8-spotter. We had a good handful of Reds then the bite fell off to nothing. We hit one more dock, had no bites, then ran up Bell River just a short distance to fish some now flooded oysters with float rigs and shrimp.  Just when I thought it was about time to wrap things up Charlie's float drifted close by some marsh grass and won it went, FISH ON! He played the fish patiently and after a good battle, landed  a hard fighting Black "puppy" Drum. His next cast went to the same spot and BOOM!  Another big fish on! He battled it perfectly and soon landed the biggest Red of the day, a 21" Slot sized fish. When we tallied it all up, the duo had 5-6 Slot sized Reds in addition to the nice Black Drum. Marge had the first fish, the first Slot fish, and the one with the most spots. Charlie had the biggest Redfish and the most variety with the Black Drum. But the best thing yet was that it was a great day to be out on Amelia Island waters!