Catch'n a Mess at Amelia Island 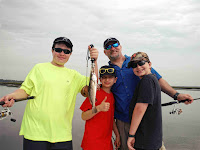 It was  kinda nice today to have some cloud cover and just a slight breeze - it made for some pleasant fishing. I met Clay Thomas and his sons Carter, Grady and Logan down at the Big Talbot Island Park boat ramp this morning and we decided to try the mouth of Jackstaff as our first stop.

All four anglers were tossing live shrimp on a jig to the exposed bank on the last of an outgoing tide. Although we had one good hookup, it shook the hook and that was it. We crossed over the creek and fished a point and this did the trick. Clay "knocked the skunk off" when he found a fat and hungry Seatrout. Minutes later, he picked up another one. After one or two more bites, we moved on. 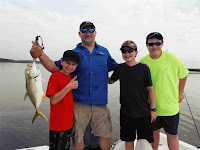 Our next stop was over on the Nassau River and within minutes of working an exposed oyster bank Clay had a strong bite and, FISH ON! This was a big fish and was ripping drag. I instructed the young anglers to get their lines in because the fish was running. We chased him with the trolling motor as it went from stern to bow and around and back to the stern. Clay kept the pressure on and after a good battle landed a big Jack Crevalle, boy what a fight!

We jumped down the river and began to fish float rigs up at some structure and all joined in catching Mangrove Snapper. Just like yesterday, they started small then got bigger and into the "keeper" sized range. All four anglers put keeper sized fish in the boat. Before the day was over, we had a good "mess" of fish and counted it as another great day to be fishing here at Amelia Island, Florida.
Posted by Anglers Mark at 6:26 PM