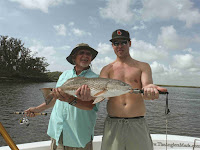 It's fishing. That's what we kept telling ourselves this morning. We had done everything right - consulted all the fishing forecasters, got out early on a good tide, and followed a plan that considered the tides. Each spot we hit we expected fish. I had met Louis Welch and his son Richard up at the Dee Dee Bartels Park and we made a quick run up and around to the outside of Tiger Island with plans to fish a nice marsh runout on the outgoing tide with mud minnows and jigs. After catching a good handful of Flounder during the week I thought this spot would be teeming with the flat fish. Both anglers were making excellent casts  and working their minnows back slowly, but we had no bites. 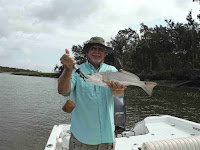 We moved around to the mouth of the Jolley and worked the "bank". The oysters were showing and we worked it thoroughly but had no real bites, other than a brief encounter with a high flying Ladyfish. We ran further up the Jolley, fished the mouth of Snook Creek, had one hookup with a  hungry Trout, but no more takers. We bounced around to the MOA, had one brief hookup, and again, no takers. OUCH.  So much for the MOA!

Continuing on, we ran around to the Bell River and fished some dock pilings. No bites. With only about an hour in the trip to go, we made the long run back around to Tiger and slipped in behind the island.

Louis and Richard were pitching the pockets and in just a short time, Richard felt his jig being tapped. He tightened the line, gave it another second or two, then set the hook with a firm rod tip lift and, BIG FISH ON! We could tell right off that this was a big fish by the way the drag was ripping. It tried to get up into the logs but Richard kept the pressure on and when he got it worked out a bit we eased the boat out into deeper water where the  battle continued. The fish ripped drag a couple of times but Richard was up to the task and eventually landed a nice 26.75"  "tournament" sized Slot Redfish, boy what a fish!  We worked up and down tha bank and Louis added two more Slot sized Reds while Richard added one of his own. Although the first 3/4's of he trip was tough, the last hour made it all OK, so we called it a day, another great one to be fishing here at Amelia Island, Florida.
Posted by Anglers Mark at 2:47 PM

Realy great post……I have no word to say.
you know what I never read this kind of long post before today ! ! You are outstanding