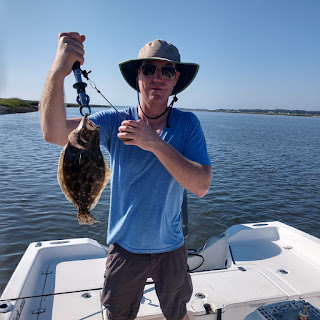 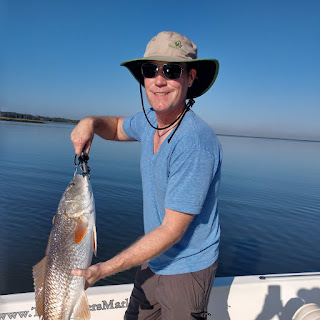 I had the pleasure of fishing with Wes Matheney who was in town with his family again this year. We met down at the Sawpit Creek boat ramp and made a short trip up the  Nassau River to begin fishing some marsh run outs and exposed oysters. Today was the first day I purchased mud minnows for bait and boy did it pay off!

Wes hooked up and landed a nice keeper sized Flounder right off (all fish caught today were released) then he had a bigger one to the boat and not uncommonly, it threw the hook. Ouch! But it didn't matter because Wes found a few more that he landed- all of keeper size-  not massively big but definitely good enough for table fare!

When Wes had  a strong hookup and his drag began to rip and the fish didn't budge off the bank we knew he had a big Redfish on. Wes fought it expertly and patiently worked it to the boat. After a long battle he landed a big oversized 32.5" Redfish- too big to keep- but good enough to squeeze in to 2nd place in the Anglers Mark 2019 Bragging Rights Tournament-Redfish Category (scroll down the right side of this report for standings).  This fish had a recent wound from what must have been a dolphin attack. He was having bad week, but he swamp off to the depths when we released him.

Wes picked up a couple of Slot Reds, a couple of small Reds and had another keeper sized Flounder down at Broward Island, then we called it a day, another great one to be fishing here at Amelia Island, Florida.
Posted by Anglers Mark at 7:40 PM