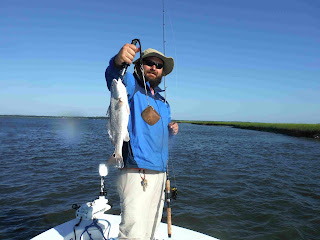 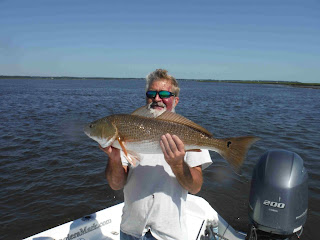 You could almost feel the Fall nip in the air when I met Stephen Locke and his fishing buddy Jason down at the Sawpit Creek boat ramp early this morning. We made the quick run up the intercoastal and dipped into Jackstaff to begin fishing with float rigs and live shrimp at a big marsh drainage.  We had just a few nibbles, then Jason picked up a hungry Seatrout to "knock the skunk off".  After moving back into the larger creek and easing along pitching jigs and shrimp we were only able to add a lone Catfish to the catch.

After buzzing thru Horsehead and around to Spanish Drop, we stuck with the jigs and it paid off. Both anglers began to catch feisty Redfish - first Stephen, then Jason, then Stephen. Each one added a Slot Redfish to the catch. Then, light a like switch, they began to catch hungry Seatrout - fun to catch but a tad too small to keep.

The final stop was down at Broward Island, fishing the logs, with the tide still going out. We did pick up a couple of feisty Redfish. We were about to wrap things up when Stephen made his final cast to the bank with a 1/4oz jig/shrimp combo, let it slowly sink and slide down the bottom when, BOOM! Big Fish On!  The fish rolled up almost immediately and we felt comfortable it was a Redfish, but then it went deep, and STAYED deep!  Stephen kept the pressure on, fighting the big fish on a size Florida Fishing Products Osprey 1000, and after a lengthy battle, landed an oversized 32.25" Redfish which slid him into 3rd place in the Anglers Mark 2019 Bragging Rights Tournament-Redfish Category (scroll down the right side of this report for standings).  After a quick measurement and even quicker pictures we lowered the big fish back into the water and, BOOM! He was gone. And with that, we called it a day, another great one to be fishing here at Amelia Island, Florida.
Posted by Anglers Mark at 5:57 PM