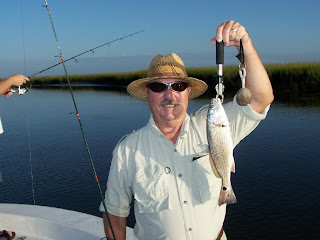 ....with a little bit of sibling rivalry thrown in! Brothers Mike Craig, Steve Leary and sister Loretta Hayes, along with Mike's son David met me at the boat ramp bright and early Sunday morning for Mike's birthday fishing trip. Although we launched from Atlantic Seafood, we decided to run south to the Horsehead area and I'm glad we did. Pulling into the mouth of Jackstaff, it wasn't long before we began to hook up with Mike catching a Bonnethead then David boating a Seatrout. Then all heck broke lose with everyone joining in catching Red after Red after Red. They were all in the 15"-17" range but they were very aggressive and put up some good battles on the light tackle gear. David did hook up with a drag-ripping fish that first headed down river, then up...and kept going, snapping the line and gone for good! We tried a couple of more spots in Jackstaff with Loretta catching a Flounder, David another Trout and then Mike had another Red. We ran to Broward Island where the anglers picked up a Puppy Drum and Snapper. This was a beautiful day with a light breeze that made the unusual October heat tolerable.
Posted by Anglers Mark at 8:37 PM