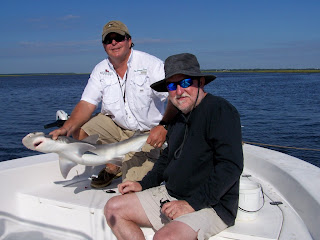 Andy Dillard of Fernandina Beach, Florida and his brother Terry Dillard of Waycross, Georgia wanted to get in some topwater plug fishing so we left the dock early this morning with the express intent of hitting a grass line quick! The high tide peaked at 7:15am and when we reached our first spot the tide was already going out. Andy, throwing a white w/red head plug and Terry throwing an all-white plug were making pinpoint casts to the grass line and began to pick up "hits". They caught a couple of trout and Andy hooked up with a hard fighting Blue that had some "umph" to him. We ran around to Jolley River, again throwing the topwaters and had more hits and then another nice sized, fighting mad, Blue. Terry switched to a live shrimp under a float and his first two casts produced bites and eventually trout. We tried a couple of more spots and ended up anchored at the MOA where Terry had a line ripping bite that took him for a tour around the boat - a few times -and after expertly working the fish to the boat - we netted a 3'+ Bonnethead Shark - that gnawed another hole in my net (this net has made it through the summer shark bite having been patched about 4-5 times). We fished the docks at Bell River, the mouth of Lanceford Creek, and then trolled Lanceford oyster beds where Terry picked up a nice Redfish. The wind was blowing 10-15mph but the sun was out on our first cool day of the year so we counted it as....another great day out on the water!
Posted by Anglers Mark at 6:36 PM