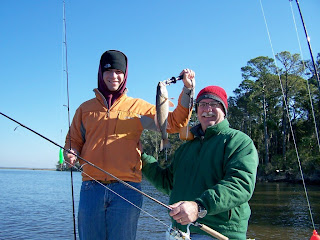 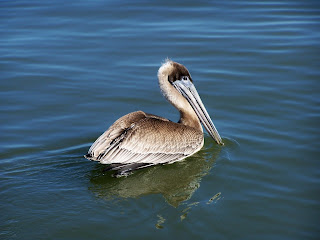 I fished today with Mark Laurint and his son Brent from the San Marco area of Jacksonville, Fl. When we launched the boat at Goffinsville boat ramp just before sunup, the temperature was still in the mid 30's, but it was clear and we had no wind. We "puttered" down Nassau River until we could see the crab traps then cruised through Jackstaff to troll the mouth with our live shrimp/jig combo (after a round of hot cider). We were using the Shimano Stradic 1000FH's on a light rod with FINS Windtamer 12lb Slate Green braided line. The line is tied to a 17lb test fluorocarbon leader using a Uni-to-Uni knot. The tide was low and had just started coming in; we had only made about 50 yards when we had a nice hookup and boated a undersized Redfish. We fished the stretch up then back and boated a slot sized Redfish and Brent reeled in a hard fighting Blue. After the second run we picked the trolling motor and headed to Seymour's Pointe, anchoring along the rocks. Mark hooked up with a couple of Redfish then we were off down the river. With the sun beginning to warm things up, we trolled the docks at Goffinsville, picking up a couple of small trout on jigs, then headed for Broward Island...and a bonanza. Our first cast of live shrimp under a Cajun Thunder float produced a Trout and then we picked up a couple of more Reds, one in the slot, then BOOM! Brent with a Redfish. Mark with a Redfish, Brent with a Redfish (and maybe another - we lost track). Most were just undersized but very aggresive and fun to catch. We ended up catching a few more trout to wrap up with (11) total Redfish, (6 1/2) total Trout, and (1) Bluefish, another beautiful day to be out on the water!
Posted by Anglers Mark at 7:26 PM