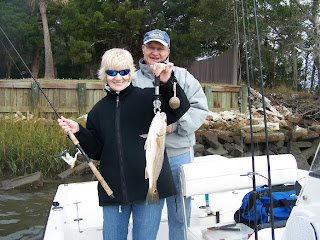 Although today's weather report called for highs in the 60's, sunshine and 7mph winds, Lowell Berry, his future wife Paula (tomorrow's wedding) and myself eventually figured out that weathermen aren't always right! It probably did get in the 60's but we only saw the sun peek through the low clouds once or twice and the wind was more like 10-15mph. Never the less, we gave it a good go, with Lowell and Paula working the shore line of Jackstaff with the jig/shrimp combo on a low and incoming tide. They only had a few nibbles so we moved around to Seymour's Pointe, anchored, and fished the rock line. It took awhile to get our float rigs positioned up near the rocks, but eventually we did and it wasn't long before Paula was battling a Slot-sized Redfish. She worked the fish to the boat and the waiting net for pictures and release. Shortly we had another Red on, this time taking the bait up near a grassy bank. In between stops we sipped on hot Apple Cider! Although we were leaving the windbreak of Seymour's Pointe, I wanted to give Broward Island a try so we pulled anchor and ran to the south end of Broward and began our troll back up river. With Lowell making good casts up between the downed trees it wasn't long before he had a hookup and worked to the boat a nice 11 spot Redfish. We had a few more bites as we trolled the shoreline, working in an out of the roots and trees. Paula had a nice, hard pulling hookup that quickly headed for a log, wrapped up, and broke off! That was a nice fish! (The big one that got away). As we passed the north end of the island and began to work the grass bank, Paula hooked up again, played the fish to the boat and Lowell netted it for a team effort. We called it a morning and headed back to the ramp, counting it as another great day out on the water!
The tide had gotten so high that I couldn't get my truck down to the ramp without dunkin it in water so with a livewell with a couple of dozen shrimp in it, what do you do? Go Fishing! I ran south down the intercoastal, into Gunnison Creek and anchored at the mouth of a runout. With three rods out, I eventually picked up 5 small Trout and 3 hard running Bluefish. If you want to take the kids out and catch some small trout, go on the first of an outgoing tide - they're out there.
Posted by Anglers Mark at 7:17 PM