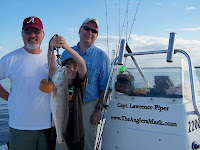 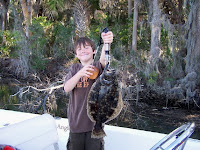 Local resident Mark Dennis had his brother David visiting Amelia Island along with David's grandson, JJ, so they took in an Amelia Island back country fishing trip on The Anglers Mark yesterday morning. The weather report had been calling for a large storm to roll through later in the day, but when we eased out of the City of Fernandina Beach Harbor Marina the skies were clear and there was very little wind -  perfect fishing conditions.  The tide had been coming in for a couple of hours and the oysters had covered, so we made a stop outside Tiger Island to fish with live shrimp under floats with our Shimano Sradic 2500 reels on 7' rods.  Both Mark and David had some hookups with smaller Trout and Blues, then Mark had a good strong bite and a battle on his hands.  But the big fish found the oysters and cut itself off, OUCH!  Not to be deterred, JJ continued to fish and when his float went under and the drag began to rip, we knew we had another big fish.  Together, grandad David and JJ worked the fish, fighting it from bow to stern and eventually we netted a Slot sized 25" Redfish!  Eventually we moved around to behind Tiger and began to fish with the jig/shrimp combo.  The anglers weren't getting much action, but JJ again found the big fish!  He had a strong hookup, his rod bent, and the fight was on!  He battled the fish, this time all by himself, and we netted a very large, 19" Flounder, putting JJ in a firm lead in the Flounder category of  The Anglers Mark Bragging Rights Tournament!  We moved on to the Jolley River where both David and Mark had hookups, long battles and releases of 3' Bonnethead Shark.  Mark rounded out the Amelia Island Backwater Slam by boating a keeper sized Seatrout, which wrapped up a great day to be on Amelia Island waters!
Posted by Anglers Mark at 11:32 AM