The Bite Picks Up 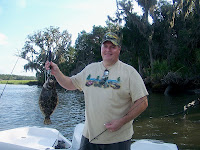 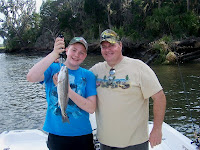 Maybe it's because we've got a front moving in or maybe it's because the high tides are receding, but it seemed like yesterday produced a better fish bite.  My guests were John Nelson and his grandson, Dylan, visiting Amelia Island from the Columbus, Ga area, and Alaska, respectively.  The tide had only been going out for about two hours so we made a  two stops outside Tiger Island to fish the still flooded oysters, but found no takers on the live shrimp under floats.  Around behind Tiger the mud banks were beginning to show around the logs so we positioned the boat to cast up between the logs with a jig and shrimp and before long the anglers were getting bites.  John got the "skunk off the boat" by pulling in a hard fighting Puppy Drum, then he landed a keeper sized Flounder.  Dylan reeled in a feisty Redfish and John caught another Drum and Flounder, and also had a small Sea Bass to the boat.  We made a run to Lanceford Creek to fish the dock pilings on the last of the outgoing tide.  I was tossing a jig just to have another line in the water and had a very strong hookup.  I kept the pressure on, walking down from the bow to Dylan, but I could feel the line rubbing the piling. It broke off. Ouch!  Boy that was going to be a nice fish!  I've been fishing for years, but it's still disappointing to lose a nice fish.  However, it's a good reminder to know how it feels when it happens to my guests.  That's fishin, though.   The good news is, shortly after, we had another strong hookup.  Dylan played the fish perfectly and we netted a nice Slot Redfish!  After trying another dock, we headed in, counting it as another great day to be out on the water!
Posted by Anglers Mark at 7:25 AM